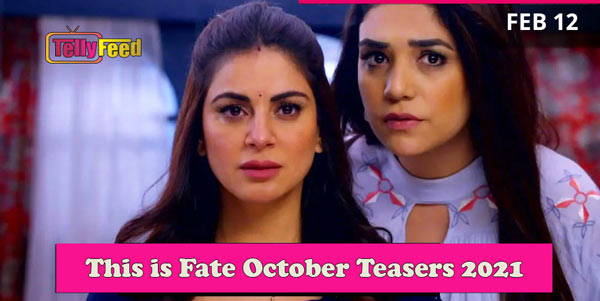 This Is Fate October Teasers 2021

Sherlyn reveals about her pregnancy, which shocks Rishabh. Coming up on This Is Fate October 2021 Teasers.

Zeeworld This Is Fate October 2021 Teasers

The police wait to take Mahira’s statement after she regains consciousness. Kareena blames it all on Preeta. Prithvi arrives at the hospital and tries to trick Karan. The Luthra family gets upset after hearing the lawyer’s words.

Prithvi learns about Mahira and Ramona’s devious plot. Mahira pretends to be homeless and Kareena asks her to come home. Rishabh opposes this but Dadi defends Kareena. Meanwhile, Janki warns Preeta to be careful about Mahira.

Karan falls for Mahira’s ploy. Preeta’s ‘mangalsutra’ breaks and her vermilion case falls down. Sherlyn overlooks the warning by Sanjana. Mahira makes the Luthras perform the rituals for her. Later, Karan supports Mahira, which hurts Preeta.

Preeta tells Mahira that she is aware of her intentions. Mahira visits Ramona, who decides to punish Preeta the way she punished Gayatri. Karan hugs Preeta and tries to make her jealous.

Dadi spills kerosene on herself. Karan calms Sarla and supports her actions. Ramona and Sarla leave after apologising to Dadi. Rishabh feels proud of Karan. Karan asks Preeta if she likes him.

This Is Fate October 2021 Teasers

Sameer tries to propose to Srishti but Kareena arrives there. Karan and Rishabh women wake up early to see the rituals of ‘sargi’. Mahira arrives to perform the rituals. Sherlyn reveals about her pregnancy, which shocks Rishabh.

Later, Rishabh lashes out at Karan and Sameer. Karan suggests Preeta to eat something secretly. Dadi and Kareena see Mahira eating in the kitchen. Mahira calls herself Karan’s wife before the guests and taunts Preeta.

Mahira and Sherlyn recall Ramona’s plan to give Preeta poison. Karan insists Preeta to eat, but she refuses. Sherlyn accuses Sarla of trying to kill her child.

While a concerned Srishti visits Preeta, Sherlyn gets Sarla arrested. Kareena threatens Srishti and Janki to punish Sarla. Preeta confronts Mahira and Sherlyn. Rishabh talks to Sherlyn about their relationship and Sarla.

Karan and Rishabh rush to the police station with their lawyer.

Karan and Preeta perform ‘Karva Chauth’ rituals and Mahira pretends to faint. Karan takes her into his arms. However, Girish mistakenly give Mahira water, which shocks everyone.

Mahira comes to the kitchen and spikes a sweet dish made for Preeta with poison. Sherlyn pretends to faint and falls on Rakhi causing the dish to fall. Mahira gets mad at Sherlyn, who slaps her.

Ramona suggests Mahira to maintain her friendship with Sherlyn. Janki insists to eat Sarla’s ‘laddus’ to prove Sarla’s innocence. Preeta learns that the ‘laddus’ she had eaten were different. Later, Preeta gets evidence to defend Sarla against Mahira.

Ramona scolds Mahira for her carelessness. At night, first Preeta and then Karan sleeps in the living room. Kareena thinks of using this opportunity against Preeta. The next morning, Sherlyn and Mahira try a plan against Preeta, but Kareena sees them.

Rakhi’s revelation shocks Kareena, Sherlyn and Mahira. Srishti and Janki arrive with Sarla’s handmade clothes for Karan and Preeta. Karan packs excess luggage and everyone talks about it.

Sherlyn brings a pill to help Mahira. Preeta learns that Mahira is staying in the same hotel. Everyone prepares for the mask party. Srishti and Sameer arrive at the hotel and learn about Sherlyn and Mahira’s plan.

Mahira serves Karan a spiked drink and tries to bed him. Sherlyn tells Preeta and Srishti how she foiled their plan. She hurts Preeta by showing a live video of Mahira bedding Karan. During a raid, the police arrest Mahira after mistaking her for an escort.

Preeta arrives at the police station and presents evidence of her marriage with Karan. Sherlyn informs Kareena about Mahira’s arrest and goes to help her. However, Preeta’s threat makes her leave from there.

Kareena and Ramona arrive at the police station to bail Mahira out. On the way to home, Preeta tells Karan about Mahira’s wrongdoings. Sameer reveals this to Sarla and saves Srishti. Karan sees Akshay with Kritika.

Akshay’s family arrives to fix the wedding date. Akshay lies to Kritika when she calls him at a mall. Srishti learns about it but overlooks it.

Preeta sees Akshay with his lover Ruchika. He tries to mislead Preeta and Sherlyn arrives there. Sherlyn and Mahira plan to use Akshay to turn everyone against Preeta. Srishti feels jealous when Preeta talks about Akshay. Kritika runs into Akshay and Ruchika.

The Luthras welcome Akshay and Preeta talks to Kritika about marrying him. Sherlyn worries after hearing about Mahesh’s improving condition.

Ramona taunts Preeta after Akshay proves himself innocent. Srishti gets proof against Akshay, but Srishti, Sameer and Preeta fail to catch Ruchika. Mahira and Sherlyn try to instigate Akshay.

Kareena lashes out at Preeta for her accusations against Akshay. Sherlyn hatches a ploy with Mahira and Preeta falls for it. Preeta and Srishti visit Akshay’s house with Kritika and Sameer.

Akshay decides to punish Preeta for spying on him. Later, Akshay misbehaves with Megha at a party.

Megha lies that she was hired by Preeta to falsely accuse Akshay. Kareena asks Preeta to publicly apologise to Akshay and Dadi seconds her.

Karan tells Preeta that he is disappointed in her. Srishti, Preeta and Sameer follow Akshay. They get an album and click photos of the pictures in it. Karan calls Preeta and she lies to him about her whereabouts. Mahira learns that he has caught Preeta’s lie.

Preeta worries about her marriage. Akshay takes Kritika to a room and forces her to cut off ties with Preeta. Sherlyn overhears this. Later, Karan hears Akshay accepting Preeta’s challenge.

This Is Fate November Teasers 2021