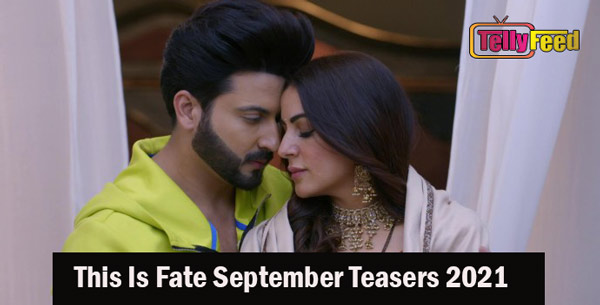 This Is Fate September Teasers 2021

On the Season premiere, Janki tells Preeta and Srishti that Prithvi and Sherlyn had tried to kill her. Coming up on This Is Fate September 2021 Teasers.

Zeeworld This Is Fate September 2021 Teasers

Sarla advises Preeta to give a fresh start to her relationship with Karan. Karan refuses to go to Preeta’s room for their first night. Srishti tells Sameer to keep an eye on Mahira and Sherlyn. On seeing Mahira and Sherlyn outside her room, Preeta devises a plan. Sameer stops Sherlyn and Mahira from spying on Karan.

Karan stays in the room with Preeta due to the rains and they close the window together. Mahira secretly overhears them. Karan gets a fever after getting drenched in the rain, so Preeta takes care of him. Sherlyn and Mahira repeatedly try to spoil Preeta’s cooking ritual. Preeta doubts Sherlyn and Mahira on seeing them in the kitchen.

Sherlyn tells Prithvi that Preeta lives with the Luthras as their daughter-in-law.

This Is Fate September 2021 Teasers

Karan gets rid of his distant relative, Rano Aunty. Pawan meets Mahira and takes her to an unconscious Preeta. Later, as Karan enters the room, Pawan hides with Preeta and Mahira puts on the veil. Mahira meets Rano and accidentally reveals her real name.

Pawan takes Preeta in a car, and a suspicious Janki follows him. Everyone asks Mahira to lift her veil, but Dadi unknowingly saves her. Pawan arrives at a house with Preeta.

Janki thinks of a way to enter Pawan’s house. Sanjana tells Sherlyn that Mahira is behind the veil. Srishti leaves to help Janki. Pawan tells Preeta that Prithvi wanted to abduct her. Janki makes an unsuccessful attempt to save Preeta.

Karan and Mahira dance with each other, and Mahira reveals her identity. Mahira asks Karan to accept her, but he says that Preeta is his wife. Later, Srishti takes an auto-rickshaw and meets with an accident. Mahira drinks before everyone under a veil.

Everyone is shocked to see Mahira under the veil. Pawan prepares for Preeta-Prithvi’s wedding. Mahira reveals that Preeta has eloped with Prithvi. Sarla slaps her. Srishti reaches on the address given by Janki.

Preeta tells Pawan that she will marry Prithvi after he regains consciousness. Pawan sees Srishti peeping through a window and drags her to Preeta. Sarla claims that Mahira is behind Preeta’s abduction and the last note. Janki unties herself.

Prithvi tries to untie Preeta’s ropes, but Pawan stops him. Janki attempts to attack Pawan, but Prithvi hits on her head. Karan misses Preeta. Later, Janki begins to recall past events after the attack.

Janki tells Preeta and Srishti that Prithvi and Sherlyn had tried to kill her. Later, Preeta, Srishti and Janki try to escape from there. Pawan shoots at Preeta, but Janki manages to save her. Further, Janki, Preeta and Srishti escape and decide to go to Luthra house.

Later, as instructed by Preeta, Srishti and Sameer bring Mahira to the guest room. Preeta announces before the Luthra family and the press that she is Karan’s wife and not Mahira.

Sanjana advises Sherlyn to stay away from Mahira and Ramona overhears this. Karan asks Preeta where she went during the ritual and she lies to him. Rakhi states that Preeta’s ‘Muh Dikhai’ ritual will be held the next day. Karan and Rishabh try to find out the truth from Sameer.

Rakhi decides to tell Mahira to leave the house. Rakhi tells Mahira to return to her home before the Luthra family. Janki tells Sarla that she has gotten her memory back. Rakhi scolds Sherlyn for trying to support Mahira.

Mahira threatens Preeta that she will take everything away from her. Preeta sends Mahira out of the house. Later, she tells Sarla and her family about Mahira’s departure. Sherlyn meets Prithvi and tells him to start working on his plan to destroy the Luthra family.

On seeing Preeta feeling cold, Karan turns off the AC and sleeps in the balcony. He helps her to get ready. Rakhi’s sister Nimmi arrives at the Luthra house and meets Preeta. Sarla asks Srishti whether she will marry a suitor of her choice.

This Is Fate October Teasers 2021