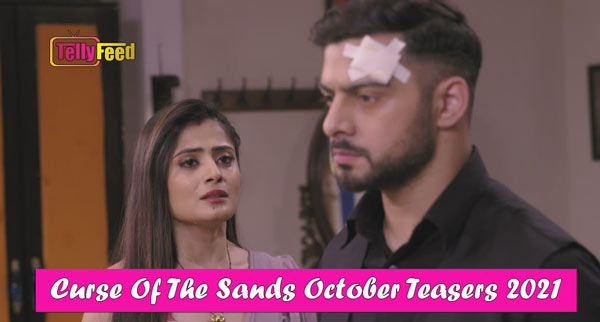 Curse Of The Sands October Teasers 2021

Ananya is left shattered when Mohini shows her true colours. Below are Curse Of The Sands October 2021 Teasers.

While Amar plots to kill Shiv, Chaya informs Mohini about it. Amar threatens to kill Mohini when she tries to stop him. Ananya gets furious with Shiv regarding the gift he gave to Amar. Mohini begins to regret her actions and decides to save Shiv from Amar. Shiv’s surprise leaves Ananya exultant.

Later, Mohini fails in her attempt to find out Amar’s next move. Amar tells Ananya that they will get married anyhow. Amar finds a way to kill Mohini. Meanwhile, Mohini requests Shiv to marry Ananya. Ananya curses Shiv for his decision. Shiv finds Amar with Mohini’s help and attacks him in his devil form.

Ananya and Shiv’s wedding rituals begin. Further, they suddenly stop the pandit from performing the next ritual. As soon as the ritual starts, Shiv’s powers begin to come out of his body.

When Ananya comes forward to absorb Shiv’s powers, Amar pushes her and absorbs them himself. As soon as he does so, he turns into a pile of ashes. Further, Amar, after his revival, returns home and Ananya gets scared to find him in Shiv’s room.

Amar stabs Mohini. Ananya is left shattered when Mohini shows her true colours. Kamal curses Dadi for supporting Amar and Mohini. When Shiv returns home, Ananya tells him everything but he too speaks in favour of Amar and Mohini.

Amar asks Shiv to rip Ananya’s clothes off. Ananya tries to look for Kamal in the house. Shiv brutally beats up the family members. Ananya stops him from doing so but just then, Amar arrives there.

Ananya tries to remind Shiv of his past but he does not listen to her. Shiv has an inkling that he and Ananya shared a relationship, but Amar lies to him by stating that he was in love with Ketki. Further, Ananya asks Shiv to convey to Amar that she is ready to accept him.

Shiv stops Ananya from attacking Mohini and tries to kill her. Ananya challenges Amar that she will turn the tables in the next 21 days and tends to an injured Shiv’s wounds. She also tells Mohini that Amar will not be able to come between her and Shiv like the way she couldn’t come between Siya and Ram.

Shiv’s words deeply hurt Ananya. Amar informs Mohini that Shiv will insult Ananya on the day of Holi. Further, he asks Shiv to set himself on fire before Mohini. Amar informs everyone that Ananya is hiding inside the pyre and asks Shiv to save her. Shiv jumps into the fire and rescues her. It gets revealed that sitting in the pyre was a well-thought-out plan of Ananya’s.

Amar tries to kill Shiv. However, a baba arrives and rescues him. Kamal and Ananya are pleased with the way their plan has worked out. Pappu Baba gives a difficult solution to Amar to win Ananya.

Amar stops Ananya from leaving the house. Amar asks Mohini to dance on shards of glass. While dancing, Mohini’s feet begin to bleed and Shiv comes forward to help her. Mohini gets emotional upon seeing Shiv helping her.

To wake Ananya, Mohini grabs a knife. Amar slaps Mohini and locks her up in a room. Mohini explains her plan to Girija. Further, Shiv hugs Gauri and they spend some good moments together.

Amar breaks Girija’s phone and burns her to ashes. Dadi and Girija’s family curse Mohini for Girija’s death. Gauri challenges Shiv that she will turn him against Amar. Later, Ananya decides to punish Amar for his actions. Mohini, who has turned into Amar’s enemy, offers to help Ananya.

Mohini states that to kill Amar, they will have to render Shiv unconscious. Later, Mohini lies to Amar saying she has killed Gauri. Rekha tries to discourage Ketki from marrying Shiv, but to no avail.

To stop Amar, Mohini decides to procure the magical book. She sacrifices her shadow and through a mirror, reaches an old part of the house. There, she recollects some past events. A furious Amar threatens to kill everyone. Shiv gets his memory back.

Everyone tries to bury Amar, but their lives get endangered. Later, with Shiv’s help, Ananya succeeds in burying Amar. The Pandey family tries to bury Mohini alive, but she warns them of her return and escapes. Further, Shiv and Ananya get closer and a year later, everyone pampers their daughter Pari.