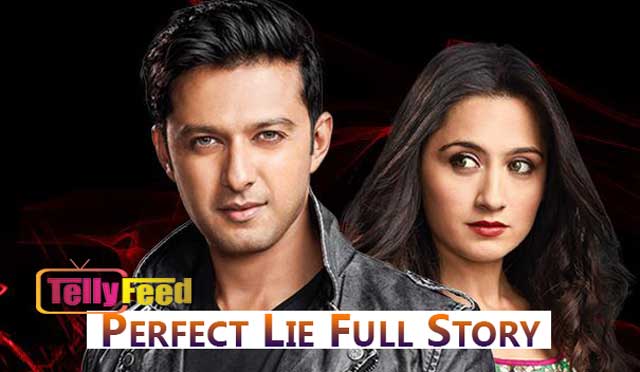 Perfect Lie is the story of a girl, Durga Thakur, who swears to take revenge from the Goenkas,  an influential family in Kolkata, seeking justice for a crime committed in the past, Will Durga be successful in her mission or will she too fall aside like every other person who has stood in the way of the Goenkas? Read Perfect Lie StarLife Full Story, Plot Summary, Casts, Teasers below.

Perfect Lie is a story about a rich, educated and confident, young woman Durga Thakur, known to be heavenly beautiful and drop dead gorgeous. Durga lives a luxurious lifestyle and is a fashionista, with incredible fashion. She encounters the Goenka family and the youngest son of the family, Shaurya. Shaurya is a good looking spoilt brat who comes from a rich family and he’s not used to hearing no for an answer. Shaurya is attracted to Durga which later turns into much more when his friends challenges Shaurya. He now wants to win the beautiful Durga for a bet he made with his friends. Shaurya’s clever parents Sakshi and Rajnath Goenka always stands by his side no matter what he does. Shaurya and Durga starts spending most of their time together as they go on a series of dates all around the city. Sakshi Goenka slowly notices Durga’s influence on his son and how subconsciously he is getting more and more into her influence. Furthermore, Shaurya’s reputation slowly gets tainted and she starts to doubt Durga’s hand on it. Indeed Durga is actually Nitya Mitra who wants revenge for her sister Payal Mitra, a mental patient whom Shaurya and his friends had raped 2 years ago.

She wanted justice for her sister go but Sakshi and Rajnath had bribed all the witnesses so Nitya lost the case. This had made Payal go mad and her parents commit suicide. However Nitya still didn’t give up and threatened Goneka’s that she will make them pay for what they did. The Goneka’s got scared and tried to kill Nitya in an accident in which she lost her face and needed to immediately be cured with the help of a surgery that would change her face. Dr. Dayal Thakur had found her and gave her the face of his dead daughter Durga.

Now Nitya is back as Durga Thakur and wants revenge from the Goenka family. She and Dayal start to destroy everyone who had made her suffer. However her problems increase when Dev, Shaurya’s cousin and the Goenka family’s eldest son returns from America. He was Nitya’s best friend and had secretly loved her. Now he wants to find out where Nitya is and what happened to her and her family while he was gone. This tenses Durga as she doesn’t want her real identity to come out.

After a series of events, Durga realises that Dev loves Nitya and that she loves him too. But she pretends to love Shaurya and decides to marry him so that she can get in the Goenka house and destroy the whole family. As Shaurya doesn’t really love her but just wants to win the bet, he takes her on a trip but Durga had already planned what to do. She made her spy, Akash, hired some goons who terribly attack Shaurya. This leaves Shaurya paralysed under the waist. Sakshi doubts Durga for doing this and is shocked when Durga is still ready to marry him.

Dayal and Durga hire a fake pandit to perform the wedding as the whole wedding is only a trap for the Goenkas. On the day of the wedding, Shaurya rejects Durga as he had been manipulated that he can’t make a good husband, by Sakshi and his friend Karan. Sakshi then tells Dev that he should marry her instead. This leaves both Durga and Dev in shock and they refuse. But then Dayal tells Durga that she can still get into the Goenka house if she marries Dev. Dayal also tells Dev that Nitya is alive and he will bring Nitya to him on her Birthday if he marries Durga. They decide to marry (fake wedding). But all this was Sakshi’s plan as she didn’t want Shaurya and Durga to marry. However she thinks that Nitya is alive and that Durga is connected to all the destruction happening after she came so she wanted Durga to be near her so that she can find out the truth about Durga. Shaurya gets jealous of Dev.

Meanwhile, Rajnath impersonates Akram Rehmat Khan (aka Akash), Sakshi’s step-son, to get the video tape which reveals that Rajnath shot his brother Arnav, Dev’s father through which Sakshi blackmailed Rajnath to marry her, killing her husband Rehmat Khan who was the only witness of the incident, to clear all the obstacles.

Things take a turn when Sakshi learns that Raj and her best friend, Raima (Kishwar Merchant) are having an affair. Sakshi confronts and shoots Raima in which she goes tocoma. Sakshi frames Dev for the murder. Because of the fear that Raima will testify against her in the court, she bribes a nurse to change her medicines which will worsen her health. Durga tries to prove Dev innocent and he eventually gets acquitted from the murder. Dev finds out that Durga is only Nitya whom he loves but hides this from her until she herself tells to him about this. In the meantime, Shaurya finds out that D. Thakur was involved in his paralysis attack, and shoots him. This provokes Durga for her revenge, in which she tries to create rift between Goenka family in which she doesn’t succeed.

Sakshi wanted to kidnapped Payal to reach Nitya but before that Rishi kidnaps her. When Durga came to know this then she tells to Dev and Akram about this and Akram gets Payal but Dev reaches the wrong place where Shaurya tries to kill him but when he shoots Durga came between Dev but not get harmed as bullet only touched her. In hospital Dev tells Durga that he knows that she is only Nitya and professes his love for her but she adamant to take revenge from Shaurya, Sakshi and Rajnath. Later, doctor tells her about her clot on her forehead and she might be saved after operation and she told doctor not to tell to anyone about this that she has only 3-4 days left.

Sakshi fakes Shaurya’s death in an accident which is executed successfully. Shaurya tracks down Payal and kills Akash and Rishi in the process; however, it turns out that they are alive. Having strong evidence against Goenka family, Durga gets the family arrested. The judge convicts Shaurya and Karan. After, Durga gets unconscious and Dev takes her to the hospital and her operation gets successful. Durga accepts Dev as her husband and professes her love to him and thus this calls for happy reunion of Dev-Durga with Payal, Kangana, Dev’s mother(Suchitra) and Akram. However, the show has an open ending with Shaurya calling Durga hence demonstrating that he was never in jail. The last scene ends with Durga hearing Shaurya whistle.