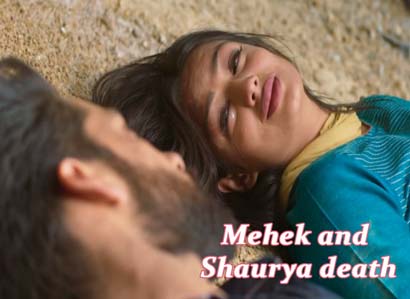 Mahek screams.. My family. She says it can’t happen. They sees thugs coming. shaurya and Mahek run. The thugs run after them and shoot. Mahek and Shaurya go in jungle. They hide in a small ditch. The thugs go from there. Mahek says who are we running from? Everything is over.

He says we have save ourselves for our baby. They sit in a truck and run in it. Mahek cries.
Suvetlana calls her men. She says did you kill them? Blooddy hell. I will kill them myself. Mahek recalls her moments with her family. She cries.

She says how can we lose all this. Why this happened with us. Why is God doing this to us? What sin did we do? Shaurya hugs her. Mahek says no one alive. We should die too. We couldn’t save anyone. He says I dont’ know. We have to fight for our family. Suvetlana shoots her thugs.

She says I should have killed you too. See inside if any9one is alive. All people are dead.
Kanta moves her hand. She gets up and tries to get Jeevan up. She says please get up. She screams. She tries to wake up Vicky Karuna and Nehal. No one opens eyes. She screams and cries. She says where are Mahek and Shaurya? I have to find them out. Please give me power God. She sneaks out. Kanta comes towards Suvetlana’s van.. She sits at the back of it and hides. Mahek and Shauyr stop at a place. Shaurya says we have to look for help.
Kanta is crying. She is hidden in the van. Mahek and Shauyra come to a dhaba. Shaurya asks the man for a phone. He gives him the phone. Someone shoots Shaurya on leg. Mahek screams.. Shauyra.. Suvetelana says this tempo guy was sent by me.

Shaurya can’t stand. He throws sand in their eyes. mahek and Shaurya run. They hide at a place. Shaurya says go from here. She says we have to be together. The thugs are looking for them. They come to shaurya and Mahek. he says your game is over. Mahek hits him on head and they run. Suvtelana shoots Shaurya in the chest.
Mahek screams. She shoots him again. Shaurya falls down. Suvetlana shoots Mahek in stomach and chest. SHe falls down too. They are both dying.

They hold hand and lose their breaths. Karuna separates their hands. she says your game is over. The evil wins at the end of the day. I killed the truth and good.
Mahek says even if we die truth will win. This war and story wont end there. In the end truth wins. You will pay for your sins. You can’t separate us. We are together forever. They both close eyes.