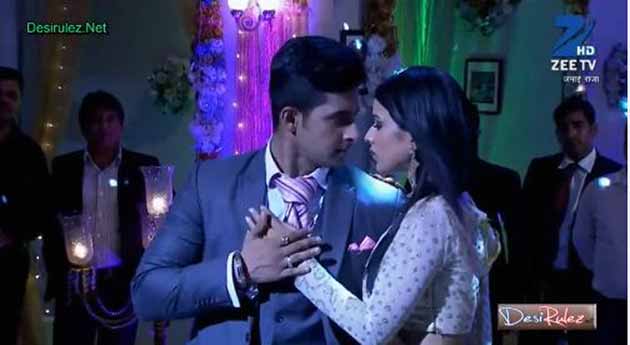 Sid, Roshni, Yash and Sam are in the car. Yash drives the car. Sid tells him that he is 100 percent sure that some car is following them and asks him to take a left turn. The other car stops. Sid asks him to come out and asks why he is following them. The man comes out of car and says he was following them so that he can give his wallet to him. Sid thanks him for returning his wallet and apologizes for shouting at him. They leave. A servant gets ready in DD’s room and says they have taken good care of me. DD comes to room and asks him what he is doing here? She calls Resham. Resham asks what you are doing here Ganpath. Ganpath says he has forYagotten the way to his room. DD says she will test him for few days before hiring him.

Sid, Roshni and Yash, Sam come to the resort. They take the keys. Yash thanks Sid for taking them there. The same man calls someone and says everything is happening according to plan. They have checked in the resort. Manager comes and says you are upgraded from normal suite to presidential suite. Sam gets irked. Yash congratulates them. Sam asks them to enjoy. Roshni tells Sid that it is going to be fun. Sid says we didn’t ask him. Roshni says Mom must have surprised us. Sid says he wants to confirm with her. Roshni says you are a control freak and says why can’t you enjoy. Sid says okay and goes with her. Someone gives money to the manager.

Ayesha calls DD. DD says lets go home, your mamma-papa will be surprised seeing you after comes back. Ayesha says she wants to have mango icecream. Someone clicks their photos. DD feels someone is taking their photo as she sees the camera flash. She asks Ayesha to come.

Resham asks Ganpath to make few things. She gets a call. Ganpath gets confused. Suddenly he gets electrocuted and the electricity goes off. DD, Kesar and Resham wonder what happened? Resham asks Kesar to go and check.

Yash tells Sam that the room is good. He asks her not to do this. Sam says their room is not suite, and says we would have get presidential suite if you had talked to manager. She says Sid shouldn’t have got us married. Yash is shocked at her behavior. Sam asks him not to return and calls him loser.

Electrician informs DD that the wiring is burnt, and he have to change the wires. DD tells that they have to shift to hotel. Resham asks Ganpath not to touch the wires again.

Sid and Roshni get romantic. Sid says he wants to use her in less clothes as he saw her in dresses and sarees. Roshni says I saw you also in sarees because of Jyoti tai. She says she wants to see him in towels. Sid agrees.

DD gives keys to Ganpath and asks him not to touch anything. She warns him and says she is very dangerous unlike Resham. Ganpath says okay. DD feels someone’s presence and asks if someone is here. Ganpath says no. DD gives him keys and asks to keep safely. Ganpath says I will take care, and then forgets.

Yash comes to Roshni and asks why she is upset? Roshni says nothing. Yash asks where is Sid? Sid comes out of pool and flirts with the girls sitting at the side. The girl says you can play volleyball with me. Sid says I have a condition, if you miss at any point then you have to kiss the referree. Girls agree. Roshni gets upset?

Sid flirting with the girls near the pool side, and says lets play volley ball. Roshni gets jealous. Sid plays volleyball with the girls in the swimming pool. Roshni looks at him while he is talking to girls and playing the game. Roshni fumes in anger. Sid asks the girl to kiss on his cheek, but then says he will take all the kisses at the end. Roshni gets angry and goes. Sid sees her going and stops playing the game. Yash asks what he is doing? Sid says when she sees me flirting with other girls then she will get jealous and will come on line. Yash says you will take me also while drowning. Sid says his plan never back fires.

Roshni comes to room and sees a dress kept in her room. She says she will show him what she can do and goes to change the dress. Sid comes to their suite and sees flowers petals on floor, and Roshni wearing sensual dress. He says it seems my luck will brighten today. Roshni goes near him, holding wine glass and gets closer. She makes him drink it and asks if he will just stare her. They get romantic. Mere Rubaru music plays………………She asks how you are feeling? This is all you needed, are you feeling good, am I looking good? Sid says amazing, in this awesome outfit and your awesome attitude.

He says your taste is good, and appreciates her choice of dress. Roshni says I thought this dress is given by you. Sid says I haven’t given it, and wonders who gave this dress at this strange place. A chit is seen with the bouquet. Sid calls DD. DD asks if you both are missing me. Sid thanks DD for arranging a suite, Roshni’s outfit and everything. DD says I haven’t done all this, I have just sent you both there. Sid says we are fine. Roshni asks Sid if mom have done this? Sid says no. Roshni is shocked and thinks who is behind this. She goes out of room as well. Joker’s chit is shown in the bouquet. DD thinks who is behind them.

Sam talks rudely with Yash for bringing her to the restaurant. Yash says he can’t afford 5 star hotel. Sid asks Manager, why he has upgraded them to suite and sending gifts to his wife. Manager talks about his owner’s policies etc. Sid asks him to stop all this right now, or bear the consequences. He says he wants to meet Alex right now. Roshni tries to calm him down and says his intentions are not bad. Sid asks have you gone mad? Yash interferes. Sam tells Yash that he is supporting Sid wrongly and tells Sid that he is behaving childishly. Roshni goes with Sam. Sid tells Yash that they came on second honeymoon, but got stuck with each other. Sam tells Roshni that she is going to sleep.

Yash asks Sid not to get worried and says Roshni will understand. Roshni calls DD. DD tells Roshni that Sid is right, loves her very much. She says I have seen him very closely when you lost the memory. Roshni says I can’t believe. DD says yes, me too. She says Sid will return to her and says he likes your irrational behavior. Roshni says you are keeping your Jamai on your head, and it is not good. Sid comes and holds her. He calls her chipku. He takes her to swimming pool. Ang Lagade Re plays……………….Roshni and Sid dances in the pool. They dance under water as well. Roshni hugs Sid.

Resham, DD and Kesar return home. Resham calls Ganpath, and sees an electrician. Electrician says he is repairing the wiring. DD asks Kesar to make tea for her and takes Ayesha with her. They go inside. Electrician does something with the wiring, puts hidden camera in the show piece. He fixes hidden cameras in the rooms. Sid asks Roshni how she got so much beautiful, and says he can’t stay away from her. Sam comes and asks Roshni to come. Yash apologizes to Sid. Sid says if sorry is your favorite word.

Sam asks Roshni, why she forgave Sid so fast. Roshni says she don’t want to prolong the fight. Just then waiter gives an invitation card to Sam. Sam reads that it is a best couple contest and says winner will get 1 crore. Sid refuses to play and says he don’t want to prove their love. Roshni agrees with Sid. Sid says she is very understanding. Yash says that’s why I love you both. Roshni and Sid leaves. Yash says they are the best couple. Sam says my foot.

Roshni and Sid are seated together on the cradle. Sid feels bad for Yash and says Sam have made his life miserable. Roshni says Sam is her sister and needs to change. She says she is very much insecure and wants me to react like her. She gets DD’s call and goes. Sid calls reception and asks them to plan romantic dinner for two couples. He thinks to make tonight special for them, and hopes the differences will be cleared between them. Someone comes and keeps hand on Sid’s neck. Sid turns. The man removes his hand.