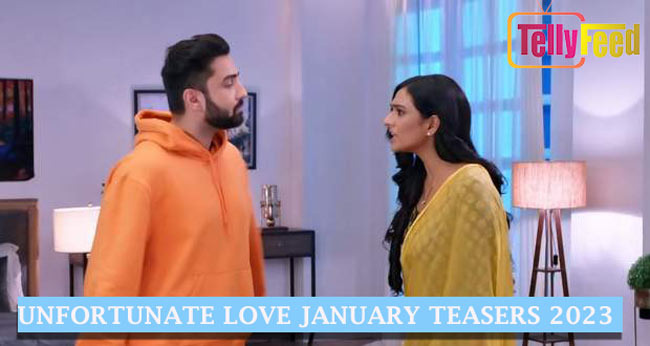 Malishka tells Lakshmi that Rishi has always loved her and the Oberois know it. Lakshmi cuts off ties with Rishi. Below are Zeeworld Unfortunate Love January 2023 Teasers.

Rishi decides to reveal the truth to Lakshmi and tells her that she made a mistake by marrying him. Lakshmi scolds Rishi and tells him what their marriage means to her. A furious Malishka makes a revelation. Malishka visits the Oberoi house to show Rishi her wedding card, but he gets angry at her.

Rishi is unable to hear any criticism about Lakshmi. Malishka tries to deceive Rishi into marrying her at the temple. Later, Lakshmi finds Rishi and Malishka’s wedding invitation card. Lakshmi questions him about the wedding card.

Lakshmi visits the Oberoi Radiant, where Malishka is there with Rishi. Sanjay’s words worry Lakshmi.

Lakshmi tells Panditji about her dream.

Lakshmi makes a promise to Neelam and sets out to find Rishi. Rishi starts the marriage rituals with Malishka but feels guilty for breaking Neelam’s trust. Lakshmi gets scared to see Rishi in trouble and goes to bring the doctor.

Neha tells Rano that something must have happened between Lakshmi and Rishi. Virendra scolds Malishka as well. Rishi runs on the road while thinking about Lakshmi and collides into a car. He dreams that Lakshmi is leaving home.

Lakshmi performs arti at a temple and the priest calls Rishi to tell him about Lakshmi. Malishka tells Lakshmi that Rishi has always loved her and the Oberois know it. Lakshmi cuts off ties with Rishi and leaves from there. Later, Rishi and Malishka get into an argument.

Neelam tries to stop Lakshmi from leaving the house. Rishi learns that Lakshmi has left the house.

Rano decides to extract money from the Oberois. Rano asks Lakshmi to go to the Oberoi House. She refuses and decides to take up a job. Meanwhile, Rishi feels hurt to see his family upset.

Neelam visits Lakshmi to take her home. Lakshmi is unable to go for the interview as she’s helping others, and Darshan gives her a job.

Rano tells the Oberois that Lakshmi wants to divorce Rishi and demands compensation. Rishi and Lakshmi are at the same place but fail to see each other. Later, Rishi appears in front of Lakshmi.

Rishi tries to talk to Lakshmi. Lakshmi tells Rishi that he is a horrible person. An upset Rishi shares his grief with Aayush. Pritam becomes suspicious of Rano’s good behaviour and later sees the divorce papers brought by her.

Pritam warns Rano not to talk about divorce again. Rano comes to the Oberoi House with divorce papers, but Virendra does not believe her words. She shows Lakshmi’s thumb impression on the paper.

Lakshmi meets Vishal for a job. Later, the divorce papers slip out of Rishi’s hands and Lakshmi picks them up.

Later, the divorce papers slip out of Rishi’s hands and Lakshmi picks them up.

Rishi and Lakshmi cut off ties with each other. Kiran tells Rishi something and he promises to marry Malishka. Lakshmi visits Darshan’s jewellery store.

Malishka bothers Lakshmi. Rishi comes up with an idea to speak with Lakshmi. Rano and Neha behave badly with Shalu and Bani. Rishi tries to explain himself to Lakshmi.

Lakshmi helps remove Rishi’s ring painlessly and asserts that they should both move on. Malishka executes her plan to frame Lakshmi for the robbery. Rishi gets locked in the bathroom. Meanwhile, the necklace is found in Lakshmi’s bag.

Lakshmi tells Shalu that she is unable to forget Rishi. Rishi, too, feels guilty. The bank employee tells Rishi and Lakshmi that is it advantageous for them to open a joint account, and they agree.

Aayush tells Rishi that he gave the card to Lakshmi, which makes Malishka furious. Later, Lakshmi realises that the card is not meant for her.

Rishi tells Lakshmi that together, they will save everyone. The robbers try to take Lakshmi but Rishi protests in order to save her. Rishi helps Lakshmi escape. Later, Malishka creates a scene and the robber points a gun at her.

The robbers find out about the video. Shalu tells Lakshmi to hide, but she refuses. The inspector calls the bank robber. The bank robber tells Rishi to choose between Lakshmi or Malishka.

The robbers send Rishi out to bring the key. The bank robbers’ boss gives his demands to Inspector Rakesh.

Lakshmi wakes up while Rishi’s condition worsens. Lakshmi overhears Neelam saying that Rishi and Lakshmi’s marriage was done because of Lakshmi’s horoscope and it would have been over in a year.

Neelam tells Malishka about her decision to bring Lakshmi back. Neelam takes money to Lakshmi with Karishma and asks her to come back. Lakshmi turns down her offer and refuses to return.

Virendra explains to Neelam why Lakshmi didn’t come back. Rishi’s condition worsens and the doctor says that there isn’t much hope. Lakshmi comes to Rishi’s hospital room and confesses her love.