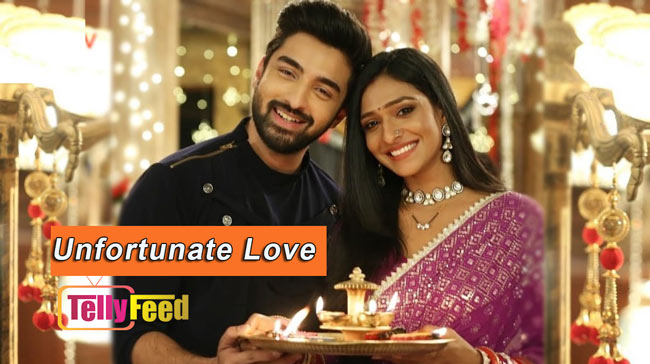 Unfortunate Love Zee World series story is based on a small-town girl who will believe in dreams and love.
She gets married to a young billionaire and her hopes will be shattered when she will learn that their
marriage is part of a deal between their families.

Hailing from a middle-class Punjabi Hindu family, the Bajwas are all set to get their eldest daughter Lakshmi married to Varun. However, when Lakshmi and her family are on their way to the mandap in a bus, a storm hits and the bus ends up dangling over a cliff.

Everyone except Lakshmi’s parents manages to get out of the bus okay. Manoj falls off the bus and dangles on it and makes his brother promise that he will get Lakshmi married. The bus with Kuljeet and Manoj still in it falls down the cliff. Kuljeet and Manoj, die in an accident, leaving Lakshmi disheartened and broken. On the other hand, Lakshmi’s aunt, Rano wants to usurp Manoj’s property. She asks Manoj’s assistant, Guru Charan to open the safe to get the money, however, he rejects her and says that Manoj’s last wish was to get Lakshmi married and that after Rano completes his last wish, she can take everything. Rano later decides to pretend to show Guru that she will give the sisters a good life and she begins her plan by breaking Lakshmi’s marriage with Varun, to take her to Mumbai and marry her off to some man.

Soon, Rano, Preetam, Neha, Lakshmi, Shalu, and Bani leave for Mumbai. They end up crash landing in a hotel that belongs to Rishi Oberoi, son of an industrialist, who seems to be arrogant and deceitful, but he is also as kind and selfless as Lakshmi. Later, Lakshmi and her sisters hide in Rishi’s office while Rishi gets frustrated about running late to a model’s event and people trespassing his 5-star hotel. Lakshmi gets Rishi to promise that he won’t get them arrested but Rishi breaks the promise and gets them arrested for trespassing and stealing an auto. Rano and Preetam get them freed with the help of Rishi’s driver, Balwinder who secretly lusts for Neha.

Balwinder does as Rano says and then the other day at Balwinder and Lakshmi’s wedding, Balwinder gets drunk and says absurd things about Rishi and his hotel. Rishi’s flight to France gets canceled and he rushes to the hotel. There he sees the bad condition of his hotel and he scolds Balwinder and blames him for the poor condition of his hotel. The hotel catches fire, everybody gets out. Rishi rushes into the hotel to ensure nobody is stuck inside but he gets stuck in a room and, because of inhaling smoke, he faints. Lakshmi comes to rescue him. The next day, Rishi’s father comes to thank Lakshmi and gets highly affected by her simplicity and good upbringing and asks Rano and her husband to marry Lakshmi to Rishi but they misunderstand that he was asking for Neha. Rishi’s father conveys the same to a confused Rishi and Neelam (Rishi’s mother). They agree to meet Lakshmi for once.

Later when Rishi’s parents arrive to give shagun to Lakshmi, the misunderstanding gets cleared and Virendra (Rishi’s father) asks Lakshmi to decide. But after being consoled by Virendra (seeing her father in him), Lakshmi agrees to meet Rishi on a date and then decide. Thus, Rishi and Lakshmi get ready to go on a date. Lakshmi then gets impressed by him. Later, the two go for dinner and Lakshmi notices his selflessness there too. Lakshmi phones up Neha and Rano to tell them that Rishi was nothing like Rano and Neha had described. Coming back home, Balwinder attacks Rishi’s car but they both save each other. Rishi invites Bajwas to his birthday. At the party, Rishi and Lakshmi fall for each other and Rishi proposes to Lakshmi for marriage. She agrees to the marriage. Rishi’s father announces Rishi and Lakshmi’s engagement the next day. All get happy except Neha, Rano, and Balwinder. In engagement, Balwinder shows some fake intimate pictures of him and Lakshmi and tries to break the engagement but Rishi shows his immense faith in Lakshmi and proves her innocent and sends Balwinder to jail. They both get engaged and Lakshmi starts falling in love with Rishi.

The marriage events start to take place when Balwinder and his goons try to kidnap Lakshmi and marry her. However, Abhi and Pragya save her. After that Neha tries to make Lakshmi unconscious and marry Rishi. However, her plan gets foiled because of Srishti and Rakhi. Balwinder tries to make Lakshmi drink water so that she can be unconscious however Karan, Sameer and Preeta foil his plan. Finally, Rishi and Lakshmi get married. However, Rishi shows his true colors and confesses that he doesn’t love Lakshmi and he was forced into the marriage. Nanaji (Neelam’s dad) asks Lakshmi and Rishi to go for a honeymoon. For the sake of Nanaji, they both go on honeymoon. However, Rishi falls into a lake and is captured by a crocodile. Lakshmi saves him but both get injured. To visit Rishi, Rishi’s girlfriend Malishka comes there. It is revealed that Rishi is married to Lakshmi only because of his Kundali Dosh and Lakshmi is the only girl who can always save him. It is also revealed that after 1 year Rishi is planning to divorce Lakshmi and get married to Malishka.

During Karva Chauth a snake bites Rishi and Lakshmi saves him by sucking out the poison. In the ambulance, Rishi gains consciousness but Lakshmi faints as she sucked all the poison from Rishi’s body. In the hospital, Rishi feels guilty and it is seen that slowly Rishi has started caring for Lakshmi. After that Ayush and Virendra vow to bring Rishi and Lakshmi close. During Diwali Rishi and Lakshmi come closer. Malishka enters the party with Viraj. Later on, Lakshmi confesses her love for Rishi to him but Rishi loves Malishka and Lakshmi gets to know about their affair. She breaks all the ties with Rishi and his family and returns to her uncle’s house. Meanwhile, her aunt was planning to get them a divorce so when Lakshmi was sleeping she took her fingerprints cleverly and went to Rishi’s house and told them that Lakshmi wants a divorce.

Rishi misunderstands Lakshmi but soon misses her and loves her but isn’t aware of his feelings towards her angering Malishka. Malishka and Rishi unknowingly go to the same jewelry shop to buy Malishka’s marriage jewelry where Lakshmi is also working. Malishka humiliates Lakshmi and accuses her of stealing her necklace but Rishi comes in time and saves Lakshmi. After a series of events when Lakshmi and Rishi file for divorce in the pressure of their respective families; the judge orders Lakshmi to stay with Rishi for 3 months. Unwillingly Neelam brings Lakshmi back to Oberoi Mansion.

Malishka tries to make Lakshmi’s image down by informing the reporters that Lakshmi wanted to marry Rishi in the greed of wealth. But when the newspaper comes, it is revealed to Malishka that Shalu informed the reporters about Malishka as “the other woman” in the life of Rishi and Lakshmi. The Oberois blame Lakshmi for ruining Malishka’s image. Things get worse when “Mahila Morcha” come to Oberoi house and humiliate Malishka by putting black colour on her face. Kiran, Neelam and Karishma lash out at Lakshmi and blame her of calling the Mahila Morcha. Rishi returns and learns of this, and in the pressure of his family, he decides to get engaged to Malishka. During the engagement of Malishka and Rishi, the engagement ring gets stolen and Lakshmi is blamed for this, however later she proves herself innocent.

Shalu brings the judge in time and stops the engagement. The next day, a wedding proposal for Ahana comes from London. Lakshmi takes the responsibility of making continental food for them, but Malishka ruins her work. Lakshmi atlast impresses Ahana’s would-to-be in laws with her Indian food. Lakshmi finds Ahana in a hospital and gets shocked to learn that Ahana is pregnant with the baby of her ex-boyfriend. To save Ahana’s marriage proposal, Lakshmi prints her name in Ahana’s pregnancy report. The Oberois get shocked to hear the news of Lakshmi’s pregnancy and accuse her of cheating Rishi. To make things difficult for Lakshmi, Malishka calls Balvinder to Oberoi Mansion to ruin her character. Balvinder lies to the Oberoi family that Lakshmi is pregnant with his child and tries to take her with him but Rishi slaps him.