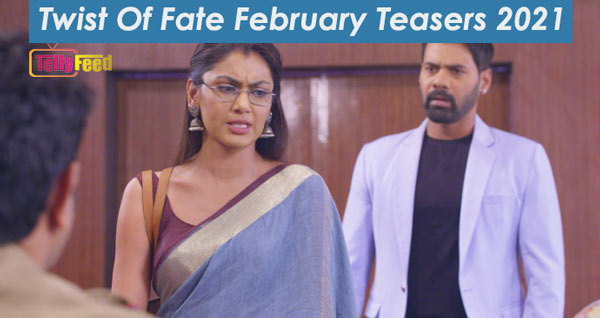 On the Season premiere, Pragya and Abhi blame each other for Kiara’s death. The Mehras rush Pragya to the hospital, due to her premature labour pain. Soon, she gives birth to twin daughters. Coming up on Twist Of Fate February 2021 Teasers.

Several months pass by as a montage shows the Mehras lovingly taking care of Pragya. Tanu visits Nikhil and strikes a deal with him to hurt Pragya’s unborn child for 1 crore INR. Soon, disguised as a Rajasthani drummer, Nikhil arrives at the Mehra house. Abhi and Pragya get worried when they do not find Kiara in the house.

Meanwhile, Nikhil gathers Rocky and his team of goons to execute his plan. After investigating, Ashish tells Abhi that the kidnapper has abducted Kiara for revenge. Nikhil calls Abhi and demands a ransom of 30 million INR. Ashish tries to stop Abhi from doing the kidnapper’s bidding. Ashish gets the police involved in the case. The police’s sudden intervention leads to Vicky getting killed!

A furious Abhi confronts Ashish for involving the police while Pragya faints at the news. Soon, the sound of a bullet being shot on Nikhil’s side silences everyone. King comes rushing to meet Pragya, who requests him to loan her the money for Kiara’s ransom. Meanwhile, the Mehras rush Pragya to the hospital, due to her premature labour pain. Soon, she gives birth to twin daughters. Abhi meets Pragya and tells his daughters about Kiara.

King feels bitter and cheated by Abhi for stealing his family. Abhi reflects upon Purab and Disha’s words and decides to talk to Pragya. However, he finds her missing on returning home and realises where she must have gone. Pragya meets Kiara at the address specified by Shetty, who asks her to meet outside and take Kiara with her. Shanky gets Shetty’s location from Abhi.

Pragya gets hold of Kiara, but Nikhil and his gang arrive and beat up Shetty.  Kiara manages to escape from Nikhil’s captivity and calls Pragya but is unable to share her location. Pragya confronts Abhi for not showing faith in her. Later, Nikhil calls Pragya for ransom. King plans to run away with Kiara to London to force Pragya to come there too.

King and Nikhil get into an argument when Nikhil refuses to follow through on the terms agreed upon. A desperate Abhi snatches a cop’s gun and threatens to kill Nikhil, who later slips and falls down into the lake with Kiara. Pragya and Abhi blame each other for Kiara’s death. Disha reveals that she had overheard King’s conversation with Nikhil before they had left to meet the kidnapper.

Still holding each other responsible for losing Kiara, Abhi and Pragya pick one daughter each from the twins and part ways forever. Twenty years later, Meera and Mitali have a tough time attending to Abhi’s daughter, Riya’s tantrums. When Shahana brings news of her and Prachi being selected for the scholarship in a college in Delhi, Pragya gets furious and rebukes Prachi.

Aliya announces that Abhi is receiving an award and his business partner, Vikram, congratulates him. Prachi wishes to never see her father who was responsible for destroying Pragya’s life. Meanwhile, Abhi finds himself wondering about Prachi. Prachi, who hears Abhi’s speech, is moved by his love for his daughter. She remembers Biji’s words about her own father.

Finally, Riya arrives at the ceremony and greets Abhi. Riya arrives at the college, and as part of college ragging, assigns Prachi with a task to slap Rohit, a fellow student. Prachi comes across Ranbir, but his pricey attitude miffs her. When Prachi and Shahana’s aunt demands them to pay for food and shelter, Prachi decides to look for a job. The next day, Abhi surprises Riya on her birthday.

Prachi and Shahana bag a job at a catering company and get assigned to a big party. Purab gets into an altercation with his wife, Alia. After greeting everyone, Riya spots Shahana and Prachi and compels the latter to throw a drink at Ranbir to save her job. Prachi does so, but the drink splashes on Abhi instead. While Prachi gives a shoulder massage to Daljeet, Riya talks to Alia about the perfect time to execute their plan.

Abhi wants Ranbir to be the face of his company. Elsewhere, Pragya gets worried for Prachi when their photograph falls down and breaks. Later, Riya accuses Prachi of stealing the necklace to get back at her. Prachi is arrested after Riya’s necklace is found in her pocket. Shahana informs Pragya about the incident. Meera slaps Riya after learning about her devious act.

Riya’s act to fool Meera impresses Alia. Pragya and Abhi’s paths cross, but they don’t see each other. Prachi signs the confession letter to save Shahana from being arrested. Abhi assures Prachi that he will get her out of the jail. After engaging in a verbal tussle with the cop, Abhi takes the help of the media. Pragya and Abhi fail to meet again.

Later, Pragya demands Sanjeev to publicly apologise to Prachi. In the college, Prachi is surprised to hear Ranbir’s belief that she is not a thief. Dasi meets Pragya, who manages to dodge Abhi.

Abhi refuses to believe that Dasi had met Pragya.  Riya vows to make Prachi pay for slapping her. Abhi plays the CCTV footage, but Alia saves Riya’s deed from being exposed. Pragya defends Prachi against her aunt. Pragya motivates Prachi and Shahana. Abhi and Meera comfort Riya after she has a nightmare.

Upset at the news of her video of getting slapped by Prachi going viral on the campus, Riya tries to run over Prachi with her car. Meera looks for Pragya’s picture in Abhi’s room. Rhea confesses that the hit was meant to be Prachi not Pragya.

Instead of allowing the police to take action, Pragya protects Rhea and Rhea becomes fond of her.

Rhea confides in Pragya and wishes she was her mother.

Pragya keeps thinking about her daughter and Abhi. Abhi and Vikram visit Sarita Ben to give her the catering order. At a signal, Abhi and Pragya’s cars cross each other. On learning about Abhi’s arrival from Sarita Ben, Pragya rushes back home. But, she fails to meet him as he leaves for an urgent meeting.