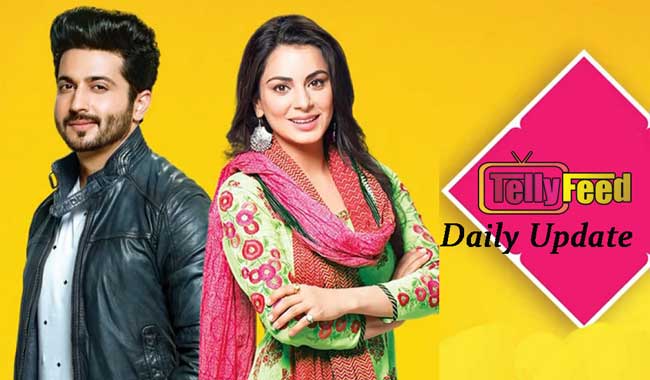 This is Fate Wednesday Update 26 August 2020

Kartika asks Maira to come downstairs as it is very cold, she explains that she will not leave as she cannot witness Preeta with Karan and wants to remain up stairs, she explains why do they not get what they have wises for their lives, saying that she loves him from her childhood but there is only one other person who knows this beside herself and it is her mother whom she told this when there was a family who wanted to marry their son to her, she refuses to believe in god saying that she knows it hurts a lot when someone heart gets broken. She pleads with Maria to come downstairs as then they might get suspicions, Maira makes Kartika swear that she will not tell anyone.

Prithvi takes Sherlin outside the house, he asks how she came to know that he married her for revenge as Karan said this to only him, she mentions that her mother came to the Luthra house and said that he married her for revenge, she says that they have to plan on how to stop Preeta from coming to the Luthra Houser yet he must forget Preeta and think ahead. She leaves after that he thinks that he cannot forget her but feels that now Preeta will know what it is like to have a friend as she will need him more than ever.
Preeta is standing and not sitting even after Bi jee asks her to sit, Shrishti makes her drink water, Sarla comes back and when Bi jee asks her the reason, she explains that they know why she would go there, she says that they both wanted Preeta to marry Karan so she got married but what happened.
She turns to Preeta saying that Preeta also loved him but agreed to marry Prithvi as she believed that her mother would choose someone who is best for her, Karan however ruined everything and married her by deceiving them all.
Sarla exclaims that she was her responsibility and she should not have believed at anything that Karan said as she would have to work with responsibility, Preeta pleads with her to not blame herself, Sarla explains that she had believed him as he promised her that he will keep Preeta happy she explains that if he met her then she would have beaten him saying that she is really wise.

Sarla says that she will cruse each and everything after what he has done to her, she request her to not say anything bad for him, Sarla asks her why is she so happy and doesn’t let her say anything to the person who wronged her.
Sarla says that she will cruse as he is the one behind deceiving her daughter so she would never want him to be happy, they all are crying.
Sarla asks Bi jee to go and sleep and without listening to anything they say, Sarla vows in front of Shrishti that they will not leave anyone from the Luthras, she orders her to call Kappu, Sarla thinks that she will teach him the biggest lesson of his life tomorrow.
Rakhi asks him why he has done such a heinous thing to Preeta, Samer tries to take him away but Rakhi blames that he was with Karan, he refuses saying that he was working alone.

Karan mentions that he did this alone and no one helped him, Rakhi scolds him saying that he has made a very big mistake even then he is standing in front of her saying that he had planned. Dadi mentions that they used to treat her like their daughter but now everything has ended, Rakhi asks why he did this to Preeta and what was the reason he left her on the road even when it has gotten very late Karina defends Karan saying that they are asking why he did this but she is defending Preeta, She exclaims that she will ask the question.
Karan in anger replies that he married her not because he wanted to bring her to their house but because he wanted to take revenge from her, she is the reason his family is broken, his father is lying unconscious and cannot talk with anyone, so he gave her the same punishment which she gave to them all and he does not feel ashamed for any of his actions, he leaves after which everyone is left shocked.
Preeta is sitting while resting her head on the side of her bed, Shrishti comes asking her to change her clothes, Preeta mentions that she is thinking but cannot find any answer, Shrishti asks what he was thinking, she explains that she is thinking why he punished her family and if he feels that she was the reason behind everything that happened to their family and he should have taken revenge from her rather than her entire family, she mentions that he blamed her for Rishab’s marriage but she did all that she could to stop it, she was his friend but he was his brother yet he was not able to stop it, she starts to cry, Sarla is seeing her, Shrishti pleads that she stop to which Sarla mentions that she should let her cry, Sarla mentions that she pleaded with her that she should not befriend the Luthra but she did, Preeta apologizes. Sarla mentions that she can cry all she wants this night but the next day she wants her to be strong and face everything that is going on in their lives with a smile as she believes that they can face any challenge with a clear and happy mind.
As soon as Sarla leaves Preeta begins to cry, Sarla is also not able to control her emotions, and she begins to weep at what has happened with her daughter.

Maria is in her room and is really worried, Kartika comes asking if she is okay, Maira explains that she is not okay and is wondering why he is punishing himself, he should forget everything that has happened in his past and move on, she also mentions that what he has done with Preeta is totally wrong and cannot be justified. Kartika mentions that they cannot forget what has happened in their past so easily, Maira is not convinced replying that this cannot justify what is wrong, Kartika advises that she should talk with Karan if she feels what he is doing is wrong, Maria wonders that if he has no feelings for Preeta then he has no right to destroy her life so she will talk with him.
Karan is in his room drinking and thinking of the memorable moments which he spent with Preeta,, Preeta also thinks of how he left her on the sidewalk, he in frustration throws the glass drinking straight from the bottle, she is meanwhile sitting in her room crying while wondering why he has done such a heinous act with her as she loved him. He thinks of how she cried whenever he saved her from any problem, she feels that she felt Karan’s presence when he was disguised as the groom. They both still cry over their blackened lives.
Preeta exclaims that she never thought she would have to witness such an event in her life and it would come to a day which would never end.
In the morning, Preeta is sleeping in her wedding dress, Shrishti enters and gets emotional seeing her, she sits with her which wakes Preeta, he gets worried, Shrishti pleads with her to change the clothes, Preeta asks what is wrong with them, she then sees that she is still wearing the wedding dress and actually forgot everything, she mentions that what Karan said about hating her was actually true and was from the depth of his heart, she leans on Shrishti’s shoulder and starts to cry.
Sherlin enters her room where Rishab is sleeping, she wonders that he should get up because she has to inform him some breaking news, she opens the blinds hoping that might wake up bt he does not then she purposefully throws the case after which he gets up, she apologizes that he should sleep, Rishab sits up, she says that she has to inform something to him but she will not, he asks her to tell him, he tries to leave, she says that Karan has married Preeta, he is left shocked, she thinks that he should turn as she wants to look the reaction on his face.

Rishab is left astonished hearing that Karan has married Preeta, she says that he must not worry as he has not brought her home with him, she explains the entire story after which Rishab leaves in anger, she starts tyo smile, he goes to his room and seeing that he is lying on the floor, he wakes him up asking why he has done this, Karan says that he ash told everyone and he must go and talk with them, Rishab says that he could take him to the police, Karan taunts him saying that he can take him, Rishab says that he should not have done this, Karan talks with him in frustration saying that he should not defend Preeta because what he did is not ethical, Karan and him are both having argument, he says that Rishab has feelings for her, Rishab emotions that he doesn’t feel anything for her and if he did it with any other girl then he would say the same thing,
Rishab says that he has committed a crime for which he can be taken to court, Karan exclaims that if wants him to do justice then he also wants justice, Rishab asks what justice he wants he explains that he wants his father to wake up and hug his brother, Rishab gets emotional seeing this, Karan says that they have broken as a family and it is because of Preeta, Rishab sits with him saying that he cannot stand by side after what he has done but will never forgive him, Karan asks if he thinks that he is wrong, Rishab pleads that he should ask himself.
Preeta is crying after leaning on Shrishti’s shoulder, Sarla comes saying that she told her to cry as much as she wants in the night but she wishes to see a smiling Preeta the next morning, she also asks her to take off the jora, Shrishti says that brides db not take it out till after a year, she explains that it is when they are considered as a bride, she takes off the bangles assuring Preeta that things will be fine, she kisses her so that she can remain calm, she then orders Preeta to change her clothes.
Preeta sits in front of the dressing table, she starts to take off her jeweler, remembering how she thought that her special day will be the start of a new life but instead it has been the start of a punishment for the crime which she never committed, she then sees the Mangal Suture and remembers that Karan promised to be with her side till the end, she seeing the mang cries but there is no one to console her.

Read Next: This is Fate Thursday Update 27 August 2020