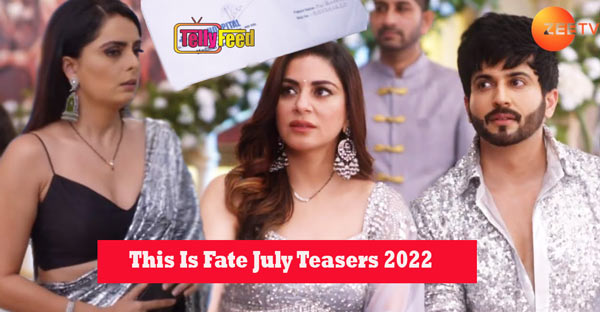 This Is Fate July Teasers 2022

ZeeWorld This Is Fate July 2022 Teasers

Sherlyn and Kareena feel jealous of Preeta when she organises a birthday party for Dadi. Later, Preeta shows signs of pregnancy, so Rakhi and Dadi tell Karan that he is going to be a father.

Srishti decides to expose her, but Kritika calms her down. After Dadi’s birthday, Karan and Preeta have a sweet banter on parenthood. Sonakshi, Karan’s friend, invites the Luthras to her wedding. The Luthras prepare to visit Lonavala.

Meanwhile, Sherlyn cuts off ties with Prithvi over a phone call. Janki loses her temper when she learns that Sherlyn had tried to harm Preeta’s unborn twins. Preeta learns from a doctor that she is not pregnant.

A doctor tells Preeta that she is not pregnant as she can never bear a child. Preeta fails to tell everyone the truth due to their excitement for the Lonavala trip. Sherlyn tells Prithvi to stay away. The Luthras arrive at Sonakshi’s house, and she introduces them to her father, Yashvardhan.

A heartbroken Preeta tells Sarla that she is not pregnant. Preeta hides the truth about her pregnancy from Karan. Soon, Srishti visits Sonakshi and Rajat at Lonavala. Rakhi talks to Achila, Rajat’s mother, about Preeta’s qualities.

Srishti overhears Achila asking Shrikant not to stop the marriage. Suddenly, someone renders Sherlyn unconscious and takes her to a room. Rajat informs everyone about it when he fails to stop him. Prithvi’s unexpected arrival shocks Karan and Preeta.

Srishti questions Rajat about a secret from his past, which worries Rajat and his family. Shrikant shows his true colours when Srishti tries to question him. His revelation about Prithvi and Srishti shocks Kritika.

During a game, Sonakshi asks Yashvardhan a question that worries him.

Later, everyone prepares for Sonakshi’s wedding. Prithvi decides to punish Kritika. Srishti almost blurts out her feelings for Sameer.

Yashvardhan and Preeta defend a heartbroken Sonakshi, but Shrikant says that he has evidence to prove his claims. Shrikant reveals that Sonakshi is married and has a daughter. The Luthras get shocked on learning the name of the girl’s father.

Sonakshi fails to answer the family questions and slits her wrist. Prithvi suggests visiting a hospital to prove that Karan is not the father of Sonakshi’s child. Karan asks Sonakshi to speak the truth, but she keeps mum. A few people visit the hospital for a report.

Sonakshi reveals that Karan is the father of her child. She explains how all of it occurred and why she had to keep everyone unaware. The Luthras get upset with Karan after learning about his past with Sonakshi. They all curse her while returning home.

Preeta gets indifferent towards Karan, who struggles to talk to her about it. Sarla breaks down upon hearing the news. Preeta tells Karan how his past with Sonakshi has been bothering her.

The next day, Sarla visits the Luthra House to take Preeta home. Sherlyn decides to disclose that Preeta is not pregnant. Kritika learns about Prithvi’s booking at a cafe and presumes that it is for her.

Karan and Preeta go to a hospital. Sherlyn eavesdrops on Preeta while she tells Srishti about her fertility issues. Sherlyn gets Preeta’s reports from the hospital and tells the family that she is not pregnant.

Preeta tells Karan to talk to everyone about it. Preeta and Karan struggle to explain why they didn’t disclose that Preeta was not pregnant. Dadi supports Kareena when she asks Preeta to go home. Kritika talks to Prithvi about moving to his house after Sherlyn taunts her.

Sherlyn lies about Kritika to Kareena and Dadi. Sonakshi’s unexpected arrival shocks the Luthras. Later, Preeta’s words stun everyone. Kareena suggests another way for Preeta to become a mother. Preeta notices a child entering the Luthra house during her prayer.

Karan and Preeta feel great to learn about the little girl, Pihu. Sarla and Srishti attend the Janmashtami celebration at the Luthra House and meet Pihu. Pihu makes Srishti and Sameer portray Radha and Krishna during a dance performance on Janmashtami.

Pihu gets sleepy after the Luthras perform the puja. Later, Sherlyn devises a plan against them. Sonakshi’s arrival adds to everyone’s worry. Sonakshi reveals that Pihu is her and Karan’s daughter.

This angers Preeta, but Sherlyn and Prithvi enjoy seeing the family in crisis. Neetu, the orphanage staff, visits the Luthra House to talk about Pihu’s admission. Preeta fears losing Pihu, but Rakhi argues with Sonakshi for her. Later, Sonakshi recalls the day when Yashvardhan had tricked her.

Karan runs into Abhay and Major, who help him to arrange blood for Sonakshi. Preeta brings her home to look after her. Sherlyn tries to instigate Sonakshi, who warns Sherlyn that she will defend Preeta against her.

This Is Fate August Teasers 2022