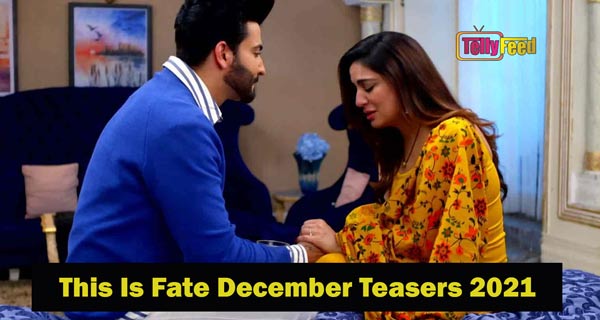 This Is Fate December Teasers 2021

Zeeworld This Is Fate December 2021 Teasers

Mahira leaves after Prithvi helps her, but his car breaks down. Srishti and Sameer wait for the blackmailer at a factory. Prithvi sees them after he fails to catch the blackmailer. Meanwhile, Mahira pays Shubham and warns him not to blackmail her again.

Mahira tells Prithvi that Shubham has been blackmailing her. Prithvi makes a confession before Karan. Ruchika tells Srishti, Karan, and Sameer that Megha has murdered Akshay. She agrees to testify in Preeta’s favour.

Later, Mahira and Prithvi have an argument. Everyone gathers for the court hearing. During the court hearing, Ruchika pretends to be unwell. Preeta’s lawyer presents evidence to prove her innocence.

Siddharth asks Karan to bring Ruchika to the court for Preeta’s sake. The judge is about to announce his verdict when Karan intervenes and proclaims that he has murdered Akshay. Preeta is released, and Karan is taken to the police station.

Pammi questions Rakhi for not fighting for Karan. Prithvi tells Sherlyn that Megha has been blackmailing him. Later, Kritika questions Sherlyn on seeing her in Prithvi’s room. Mahira begins to suspect Sherlyn.

Preeta visits Karan in jail, which upsets Prithvi. Rakhi requests her family to pretend to be happy so that Mahesh’s condition improves. Suresh notices Pammi’s behaviour and gets worried. Prithvi threatens to expose Megha.

Prithvi is shocked to learn that it was Sherlyn’s number and begins to suspect her. Rakhi makes Pammi realise that she had misunderstood Preeta. Prithvi saves Sherlyn from getting exposed in front of Kritika, Sameer, Srishti and Preeta.

Preeta suspects Sherlyn after discussing a trail of footprints with Sameer and Srishti. Sherlyn deliberately leaves her footprints outside Mahira’s room, making Preeta suspect Mahira. Kritika reveals to Preeta that she still has Akshay’s phone. Preeta sleeps on the floor for Karan.

Prithvi visits Karan in the jail and video calls Rishabh to make fun of them both. Pammi tells Rakhi that Srishti has fallen for Sameer, who loves Mahira. Ruchika agrees to help Megha in exchange for a share in the money expected from Sherlyn. Sherlyn plans to teach Megha a lesson.

Srishti and Sameer turn Mahira against Sherlyn and she soon confronts Sherlyn. Preeta interrogates Sherlyn about Akshay’s murder. Preeta, Srishti, and Sameer learn that someone knows a secret behind Sherlyn’s pregnancy. Prithvi strangles Megha but Ruchika attacks him.

Sarla stops Preeta from meeting Megha and decides to visit Karan. Sherlyn prepares to visit Dr Deepali, who has planned to meet Kritika. Sarla fails to meet Karan in jail.

Kritika visits her friend Dr Deepali, who is expecting Sherlyn as well. Srishti and Sameer bring an unconscious Karan home. They later make a revelation that shocks Rakhi and Preeta.

Srishti suggests Mahesh to lie to the police. Karan’s family lies to the police about him and asks them to find him. Rishabh learns about it and asks him to go back to jail. Kritika breaks down on listening to Prithvi at Dr. Deepali’s house.

Kritika sees Prithvi at Dr Deepali’s house and asks him if he is Sherlyn’s husband. Preeta explains why she thinks Sherlyn is Akshay’s killer. Karan threatens to get Sherlyn arrested. Prithvi pretends to be upset with Kritika and later informs the police that Karan is at the Luthra House.

To have Karan arrested, Prithvi calls the police. Karan surrenders to the police and cooks up a story to save Srishti and Sameer. Preeta threatens Prithvi, which scares Sherlyn.

Sherlyn decides to steal Rakhi’s jewellery when Prithvi refuses to get himself arrested for her. Megha gets scared on learning Sherlyn’s plan against her. Coincidentally, Preeta and Srishti arrive there for some evidence against Sherlyn.

Preeta makes a revelation to Rakhi that shocks Sherlyn and Prithvi. At the court hearing, Sherlyn hints Megha about her secret. Sameer tells Preeta why a hotel staff refused to testify in Karan’s favour. Preeta, in the witness box, accuses Sherlyn of Akshay’s murder.

Later, Preeta puts forth a request in the court. Sherlyn pleads with Mahira and Prithvi for help. Kritika overhears Sherlyn and asks Prithvi a question. Sherlyn later presents evidence to prove her innocence and accuses Megha of Akshay’s murder.

Kareena reprimands Preeta for her accusations and praises Sherlyn for saving Karan. Sherlyn refuses to forgive Mahira and Prithvi for not helping her. Later, Kareena decides to get Prithvi and Kritika married in three days. Rakhi plans to organise Sherlyn’s baby shower before that.

Dr Roshni tells Preeta about Prithvi and Sherlyn’s past. She gives Preeta evidence to prove that Sherlyn is pregnant with Prithvi’s child. At home, Rakhi prepares for Sherlyn’s baby shower.

Preeta questions Prithvi’s intentions. Preeta tells Prithvi that Dr Roshni has revealed his secret and she is going to tell everyone soon. A frightened Prithvi runs to caution Sherlyn.

Meanwhile, Prithvi tells Preeta that Sherlyn was faking a panic attack. The next day, Sherlyn decides to get rid of Preeta. Prithvi blurts out something that lands him in trouble. Preeta interrogates Prithvi while Sherlyn is being operated upon.

Later, the Luthras mourn the loss of Sherlyn’s unborn child. However, she loses her cool when Prithvi calls it good riddance. Preeta tells Karan that Dadi and Kareena want her to have a baby.  Mahira tries to expose Prithvi.

However, Rishabh questions Mahira when Prithvi accuses her of trying to harm Sherlyn. Mahira vows to avenge her humiliation. The Luthras plan Kritika and Prithvi’s wedding. Sherlyn fears that Prithvi might fall in love with Kritika.

Rishabh and Rakhi blame themselves for Sherlyn’s loss but Mahesh and Preeta console them. Kareena sees Sherlyn and Sanjana arguing with Prithvi’s mother. Srishti pretends to be ill and Sameer rushes her to a hospital.

This Is Fate January Teasers 2022