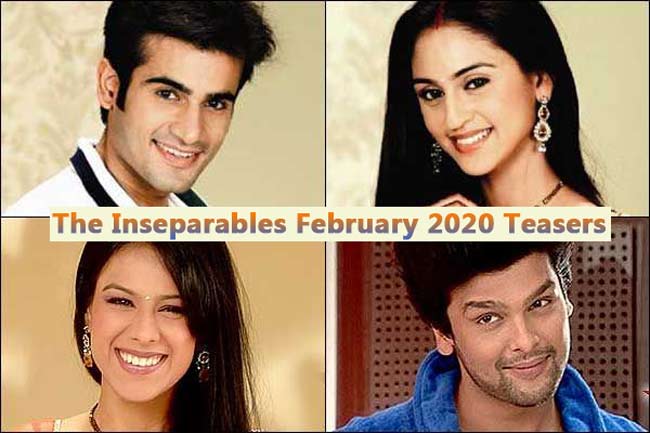 Maanvi takes Jeevika to the market and argues with a shopkeeper to make her reveal her identity,Will Jeevika’s identity be revealed? Read The Inseparables February Teasers 2020.

Jeevika applies balm on Maanvi’s hand. While Viraat faces difficulties with his employer, Viren calls Jeevika and asks her to send a file to his office. Meanwhile, Swamini sees Jeevika in a maid’s costume and questions her identity.

Jeevika cherishes the 100 rupee note that Maanvi had given her. Meanwhile, Beeji disapproves as Daboo and Sweety eat in their room, instead of eating with the family. Later, Jeevika dresses as Dhanu, the maid. How will the family react?

Maanvi tries to see Dhanu’s face, but Jeevika stops her from removing the veil. Viren learns that Jeevika is posing as Dhanu. He summons her to his room and pretends to flirt with her to provoke her into revealing the truth. Meanwhile, Sweety asks Daboo to talk to his parents about the money he won in the lottery.

Jeevika confronts Viren for flirting with Dhanu. Viren teases her by pretending to be attracted to Dhanu. Maanvi takes Jeevika to the market and argues with a shopkeeper to make her reveal her identity. Will Jeevika’s identity be revealed?

Viren pretends to flirt with Dhanu. He calls her as Jeevika when she is about to hit him. Meanwhile, Maanvi helps a boy choose a bouquet for his girlfriend. The shopkeeper challenges her to sell bouquets for two hours. On the other hand, Viraat’s employer arrives at his house with the police.

Maanvi insists on staying with Viraat and supporting him. The next day, she meets Jeevika and tells her about her job at the flower shop. Dadaji’s client, Baskar Sangvi, hires Viraat to sing at his party and Maanvi for flower decoration in his house. Will they agree?

The Vadhera family attends Mr. Sangvi’s party. Maanvi supervises the flower decoration at the party venue. Keshav, the manager, asks her to wait for the payment. Viraat soon arrives at the party with the other musicians. Meanwhile, Viren slaps Keshav for misbehaving with Maanvi.

Viraat asks Viren not to interfere in his marital life. Maanvi comforts Viraat and inspires him to achieve his goal. A shopkeeper then provokes Viraat and Viren against each other. Later, Mr. Sanghvi appoints Viraat as a singer in his restaurant. Will the family ever re-unite?

A goon warns Viren to leave Mr. Bansal’s case. While Beeji sees Sweety and her mother at the market, Maanvi hires some goons to re-unite Viraat and Viren. Meanwhile, Vanshika comes to take Viraat home to celebrate Holi. Will he accept her offer?

Viren, Jeevika, Viraat and Maanvi celebrate Holi together. On learning that the Vadhera family is rich, Sweety becomes excited to visit them. Later, the Vadhera family welcomes the Chaudhary family and greets them on the occasion of Holi.

An intoxicated Viraat applies colour on Viren. The Vadhera family dances and celebrates Holi. Maanvi tries to contact the goons over the phone, but in vain. Viraat overhears their conversation and confronts Maanvi. How will Maanvi defend herself?

Mr.Sanghvi asks Viraat to sign the contract papers of his new album. He gives him an advance of Rs. 1 lakh. Viraat is delighted as he wins the challenge. Meanwhile, the police arrest the goons who snatch Viraat’s money. Later, Viraat apologises to Viren and patches up with him.

Vanshika asks Viraat and Maanvi to return to the house with their luggage. Viraat and Maanvi persuade each other to start packing. Meanwhile, Sweety receives the gifts from Vanshika when Beeji rejects them. Viraat thanks Maanvi for supporting him. But he is sad on recalling his past.

Vanshika plans a family trip to Kuldevi temple. While Maanvi asks Viraat to carry her, Beeji scolds Sweety for ordering a custom made dressing table. Later, Viren hits a woman with his car. The woman then prepares to jump off a cliff to commit suicide. Can Viren save her?

Viren learns that the woman, who tried to commit suicide, is the wife of his old friend, Sambhav. Jeevika then asks him to meet Sambhav and informs him about Riya’s suicide attempt. Will Viren learn more about Riya?

Sambhav shares his grief with Viren. Meanwhile, Beeji is upset when Sweety hires a maid. But Daboo criticises Beeji for hurting Sweety’s feelings. Meanwhile, Maanvi sees Viren with Riya at the restaurant and becomes suspicious.

Riya meets Viren late night outside his house and apologises to him for her past behaviour. Maanvi sees them together and gets suspicious and shares her concern with Viraat. Meanwhile, Beeji gets angry seeing Daboo and Sweety wear expensive clothes.

Viren manages to stop Sambhav from admitting Riya in a mental hospital. He offers to help and take Riya out. He decides against telling Jeevika about it. Viraat sees them together and misunderstands. What will happen when Jeevika finds out?

Riya invites Viren for lunch, which he accepts. The two get stuck in the hotel storeroom. Beeji gets angry with Sweety for giving her dress to Lakshmi. Meanwhile, Maanvi and Viraat suggest Jeevika to have lunch with Viren in the office.

Viraat and Maanvi become suspicious on finding a lipstick in Viren’s car. Later, Maanvi catches the two in a flower shop, but when she asks Viren about it he lies to them. They plan to find out about Riya’s true intentions, and invite Sambhav and Riya home for lunch.

Viren gives Riya sleeping pills and carries her to the bedroom. Viraat and Maanvi believe that Riya and Sambhav are manipulating Viren. They try to warm Jeevika who does not listen to them. Meanwhile, Riya accuses Viren of taking advantage of her.

Viren pursues Riya in his car. Viraat, Maanvi and Jeevika find Viren’s car and follow him. Sambhav comes home and does not find Riya. He later goes to Viren’s house with the police to arrest him. What happens to Riya?

The Chaudhary family hears about Viren’s arrest on the news. The Vadhera family goes to the police station and request the inspector to release him. But he refuses as Viren confesses to his crime, leaving everyone shocked.

Dadaji insists that no one should help Viren, if he is found guilty. Jeevika refuses to forgive Maanvi for suspecting Viren. Sweety suggests that they all go to Chandigarh to support Viren but Beeji is against it.

Jeevika convinces Sambhav to attend the trial. Viren informs the judge that the person in the photo presented by the prosecutor is not Riya. But Sambhav confirms that the woman is indeed Riya. This angers Viren. Can Jeevika bring out the truth?

Jeevika vows to prove Viren’s innocence and requests him to retract his confession. She approaches Sambhav for help. Amid all this, Sweety calls for a press conference.

Despite Jeevika and Sambhav advising against it, Viren gives a signed confession to the police. Sambhav forgets his house key at the station. Jeevika goes to his house to return it but is surprised when she sees a man asking for Sheetal.

The entire Vadhera family goes to meet Viren and requests him to withdraw his confession. He is shocked seeing Riya’s obituary in the newspaper. Meanwhile, Maanvi and Viraat becomes suspicious when Sambhav does not attend the trial.

Jeevika confronts Maanvi regarding her testimony, which is broadcast on television. This causes further disharmony in the Vadhera house. Jeevika refuses to forgive Maanvi. Will the sisters come together to save Viren?

Jeevika confronts Maanvi regarding her testimony, which is broadcasted on television. This causes further disharmony in the Vadhera house. Jeevika refuses to forgive Maanvi. Will the sisters come together to save Viren?

The court calls Viraat, Jeevika and Maanvi to the witness stand. Jeevika tells the court what she witnessed, but Maanvi’s statement implies that Viren pushed Riya off the cliff. Meanwhile, Sambhav submits a CCTV footage which shows what happened on that night of Riya’s death.

Sambhav accuses Viren of molesting Riya and later killing her to hide the truth. No one believes Viren’s version. The Vadhera family is distressed seeing the footage. But Jeevika refuses to believe it and decides to investige.

Viren informs Viraat and Maanvi about Jeevika’s plans. Meanwhile, Jeevika looks for clues inside Sambhav’s house and her suspicion is validated when she finds something in the bedroom. Will Viraat and Maanvi believe Viren’s innocence?

Maanvi and Viraat join Jeevika’s effort in spying on Sambhav. They catch him paying a man and follow him to find more clues. They find a photo of a woman in his house and believe Viren can help identify her.

Viraat apologises to Viren for not believing him. They plan to find out the relationship between Sambhav and the real Riya. Viraat and Maanvi go to Mumbai to find out about the woman who posed as Riya, and Jeevika finds the stranger again and follows him.

The mystery starts to unravel when Jeevika finds out about the woman who was introduced to Viren as Riya. Viraat and Maanvi uncover more information about that woman. Jeevika follows Sheetal’s maid to a deserted area and is shocked by what she sees.

Jeevika gets caught while snooping around and is held hostage by the thugs. Family members get worried with her disappearance. Jeevika strikes a deal with Sheetal’s brother and asks him to let her go.

Jeevika hides the deal from Inder and apologises to family members for making everyone anxious. Maanvi and Viraat go to Riya’s house to find it locked. Meanwhile, Teja confesses to the police. Will Viren be released?

Sheetal discredits Teja’s confession and says Jeevika forced him into giving a false statement. Sheetal tells the police about Teja kidnapping her the previous night but is unable to prove it. Meanwhile, Viraat and Maanvi find a crucial clue.