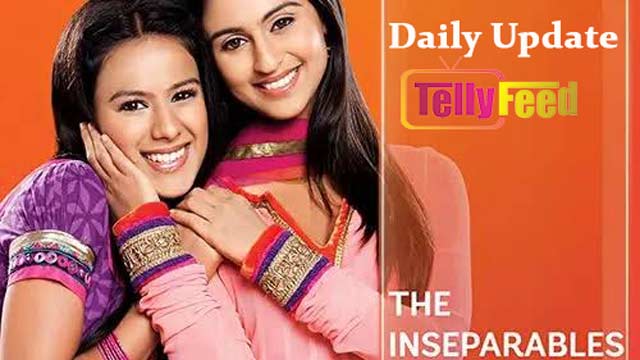 Strong arguments take place at the police station. Viren accuses sheetal of indulging in a plan with sambhav. Sheetal says she doesn’t know anything and her brother is a selfish guy. And he’ll do anything for his benefit. She tells the inspector that all this is a lie. And when she force teja he admits that jeevika forced him into giving this statement. He says jeevika offered to solve all his problem If he does that.

Sheetal tells the inspector that jeevika is behind this conspiracy. All are shocked. Jeevika admits to the police officer that she indeed offer him money. But that was for saying the truth. Inspector gets angry on hearing that. He accuses vadheras of lying and making up stuffs. Sheetal says she doesn’t even know these people. She asks inspector not to involve her in this and she leaves from there.

Sambhav is waiting outside She gets inside sambhav’s car and they leave from there. Jeevika sees her going with sambhav. She rushes back to viren and tell him what she saw. They understand it’s all planned. Teja is still there and he complains that they made him tell lies and didn’t give his payment. Inspector asks him to keep quiet. Chachù and jeevika requests to police officer to go and check at mill where jeevika met teja yesterday. Teja asks why should they go there. When chachù insists inspector agrees.

Virman are walking through the road in mumbai. Manvi says this is a great lead and they should inform jeevika soon. But when they call her up, call doesn’t get connected. Virat says they’ll miss their flight. And they rush.

Jeevika chachù and inspector reaches the place. But they can’t find any traces of a kidnap at that place. Jeevika wonders how is it possible. Just then she sees teja’s men coming. They first try to run from there. But then stops. When questioned they says they come often to play cards there. And got scared seeing them. They says they won’t repeat it and ask for forgiveness. When jeevika asks why are they lying, they says they are meeting her for the first time. Jeevika then see a watchman there. He says he always stays there except when he goes out to buy vegetables. He says he was there yesterday also. When she asks about teja, he says he doesn’t know such a person. Inspector says that jeevika is making up stuffs to save her husband. And leaves angrily.

Chachù and jeevika reaches back. Jeevika tells vadhera’s all that happened. They understand there ‘s a big conspiracy. Vanshika asks why’s sambhav doing this. Jeevika says today morning she left thinking today everything will be alright. But now i feel there is no hope. Beeji asks her not to lose hope. She replies she has hope. And goes to meet viren So that she can ask him what all he knows about sheetal and sambhav. Maybe from that she can hain some proof.

At police station viren asks police inspector about what happened at the mill. He tells convulsing the watch and says his wife is making up all this to save him. Viren wonders why is sambhav doing this to him.

Manvi and virat tells jeevika all what happened. That riya whom sambhav married was not happy with him. She wanted to leave him and come back. She even wrote that to her parents. Also riya’s parents where quite rich. Jeevika says but she doesn’t know what connection does this have with viren. Why did sambhav introduce sheetal as riya to viren. How’ll we prove all this. Manvi says there’s a plan. Remember how we used to irritate teachers In our childhood. Jeevika thinks for a while and says yes. Virat asks what. Manvi and jeevika asks him to wait and see.

Virman sends two people to sambhav’s and sheetal’s home. Guy tells sheetal that sambhav wants to meet her and tells her the place. And another guy tells sambhav that sheetal wants to meet him. Sambhav asks why didn’t she call. Guy says its all because of jeevika she must be tapping your phone. Don’t consider her lightly. Sambhav says ok.

Virman gets call that the men did their job.

Virman and jeevika waits at the place they called sambhav and sheetal. They wonders whether they ‘ll come. Are they alert about our plan. But by then sambhav and sheetal comes in their cars. Trio hides behind a bush. Sheetal tells sambhav that it’s good that they chose a place like this. Otherwise jeevika is not letting them meet peacefully. Sambhav asks about teja. And sheetal says she handled him for the time being. Sambhav says Good otherwise now they’ll be rotting in jail. Sheetal asks what about us. When are we marrying. Sambhav says we can’t marry in this situation. Is this why you called me now. Sheetal says he had sent someone to her and asked to come here. He says she had sent someone. They understand it’s jeevika’s plan. They look for jeevika. But the trio hide. Sambhav can’t find her. He tells sheetal that she might reach soon. So let’s leave from here. It’s not safe here.

Jeevika understands that sheetal and sambhav are having an affair. So to marry her sambhav killed riya and had put the blame on viren. Now i understood your plan. Now i’ll save viren from this.

At home, swamini bua is happy that truth is out now. She says it’s the victory of jeevika’s trust. After that video, they all doubted on viren. But only jeevika trusted him fully. Vanshika feels bad that they didn’t support viren. Viren might have felt bad that we didn’t support him. Beeji says not just jeevika but we all will be with him.

Virman and jeevika reaches jail. They tell viren about their new findings. Viren understands sambhav’s plan. Virat says they have some proof to prove this. But manvi says it’s not enough. Jeevika tells she got a good proof. She tells about teja and what all happened during their absence. Virat says he has a plan. But viren says plan is complicated. Virat replies it depends on jeevika. Viren says it’s risky. But jeevika says she’ll do anything for him. Viren asks her to be careful. Manvi assures him that she’ll be with jeevika like a shadow always. Manvi says when sisters do a job together they always succeed. Virat asks them to leave soon. Viren calls jeevika when they are leaving. He holds her hand. They look at each other. They have a moment together.

Virat’s men reaches teja’s place. They start breaking things and goes to beat teja. They say sambhav had send them. Teja says yesterday by mistake i went there. But now i’m under control. I wont come under jeevika’s offers anymore. They say sambhav had sent sheetal on time and saved the issue. Otherwise you ld have spoiled our boss’s game. Now sambhav will not give you anY money. You ‘ve lakhs of debt. And you are gonna rot. They ask him not to tell his sister about it. They see they’ll keep a watch on him always. They leave.

They tell virat that his job is done. Virat informs Jeevika and manvi about it. Teja comes out and virat starts following him. Virat tells manvi that teja won’t meet sheetal at her home as he knows sambhav’s men are watching him. Teja is waiting near a basket ball and sheetal comes there. Virat gets out and goes near them to listen to their conversation. Teja tells sheetal about sambhav’s men scaring him. But sheetal says it’s not possible. Sambhav loves me. He says it’s all sambhav’s plan. He’s doing it for his reasons. After this he’ll leave you.

Jeevika calls up sambhav and tells him that she wants to meet him. He says he’s busy. But she says she’ll take only a few minutes. When she insists he agrees. Jeevika and manvi are happy that their plan is working.