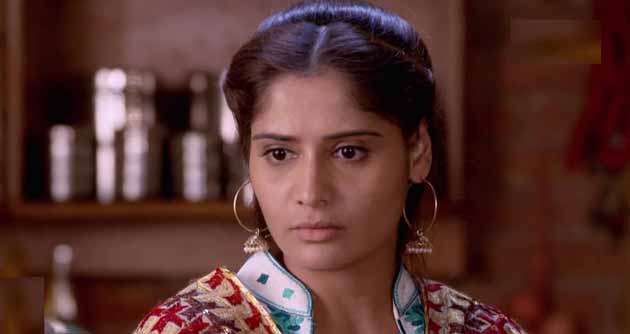 Mannu and Raj doing the aarti. Pandit asks Raj to fill Mannu’s maang, to complete the puja. Chandar asks what’s the need. Raj says I won’t let this puja stay incomplete. Tum ho gham ko chupaye…..plays…..Raj fills her maang. Pandit blesses them. Mannu feeds the food to Raj by pandit’s support. Chandar gets angry. Raj also feeds Mannu. They pray. Mannu goes to pandit and thanks him for coming on time and helping her. Raj looks on and stops her. He says it means you called pandit here, you wanted to feed me first, why. She recalls his words and says for friendship. She goes. He says its because of love, this time I will not let you go away.

Raj goes and tells Chandar that he has won the challenge, Preet will always be of him. He asks her to use the divorce
papers to burn and get heat in winter. Chandar stops him and threatens him about Babli. Raj asks what did you do with Babli. Mannu talks to Sukh and asks why did Jagan not leave Babli till now, don’t worry.

Raj comes to Mannu. She says Babli… Raj says she is with Chandar, he said if I sign in divorce papers, he will leave Babli. She says then sign it. He says I will not repeat my mistakes, I will free Babli from him. Rohan comes and asks what about Simran, Mohini is added these wrong medicines since many days.

Raj asks what’s the secret, why is Mohini doing this, I will not let Chandar win, I promise I will save Simran and Babli.

Raj calls Jagan and says I m calling from Chandar’s place. He gets to know about Babli. Raj thinks what’s this place. Mannu says I can say, we will go together, I can’t risk your life. He asks her to sit in the car. Raj and Mannu come there. Raj gives her a gun. Raj beats the goons. Mannu meets Babli. Babli tells Mannu about Mohini and Chandar’s fight about a secret. Mannu asks what secret can they have, what can Mohini ruin. Raj says its a big game, everything is linked. She says we have to find out, maybe that can solve all our problems. She says Chandar will use Babli against us, sign the divorce papers. Raj asks what are you saying.

Mannu says we have to leave Babli here, you have to sign. Raj says but Babli… Babli says I m ready to stay here, I m brave sister of Preet, she told me many stories of Mannu and Raj. Chandar comes there. Mannu and Raj hide. Chandar sees Babli and pities her. He says I have to marry Preet, show this anger to your dad who left you here. Mannu gets angry. Raj stops her. Chandar asks the men to take Babli to Bajwas house. Chandar gets Babli home and calls out Preet. Raj asks him to leave Babli. Chandar asks him not to be angry. Raj asks him to leave Babli. Chandar asks him to sign on divorce papers. Raj refuses. Mannu thinks what’s Raj acting, I have to take Raj’s sign to save my sisters from Chandar.

Raj refusing to sign on papers. Chandar calls Preet. Mannu asks Raj to sign. Raj refuses. Chandar says fine, I will end the game. He points gun at Babli’s head. Raj asks Chandar to leave her. Mannu asks Raj to sign. Raj signs the papers and cries. He asks Chandar to take the papers. Chandar sends Babli to Mannu. Chandar says I promised you, you will sign the divorce papers, I have won. Mohini thinks I can’t let Chandar fail my plan, he has to marry Simran. Chandar goes. She goes after him.

Raj and Mannu smile. Raj says I will tell truth to Amrit and Rohan. Mannu says I will drop Babli home. Raj recalls their relation is of heart and will never end. Raavi tells Jagan that she has made his fav food, get Babli back, Preet has agreed for marrying Chandar. Jagan gets angry.

Mannu gets Babli home. She calls police and says arrest Jagan for kidnapping Babli. Jagan scolds her. He asks where is the proof. Babli says I m the proof, you have kidnapped me, I m saying it. They get shocked. Mannu asks Jagan to have dinner in jail for some days. Jagan gets arrested.

Babli hugs Raavi. Amba asks how is Simran. Mannu says she is free from Chandar, he feels I m marry him, Raj also signed on divorce papers. Amba hugs Mannu and cries. Rohan says this will be your plan, but you know the sign value, you got legally separated. Raj says when did we unite that we will get separated, its fine, we were never together by hearts, I have to make a love bridge that always joins us, none can break us apart, I love her a lot. Amrit cries and says I m with you. Raj says I will bring out Chandar and Mohini’s truth, then I will confess love to Preet and marry her, don’t tell her my feelings.

Raj goes to Mannu and gives a diary. Chandar comes there and why are you here, she is not your wife now. Mannu says he is saying right, go from here, I have to spend time with Chandar. Chandar asks him to shut door. Raj says Preet will always be mine. Chandar asks Mannu to check the gift, its suhaag chunri. Mannu says you have got this, but….you forgot your promise. She asks him to sign the papers, else what will she show to panchayat.

He says its a small thing and signs on papers. She thinks Simran will be free from him now and cries happily. He pulls her close. She pushes him away and asks him to stop till marriage. He says then marriage will be tomorrow, I can’t wait more. He makes her wear the chunri. He says we will party tonight, my friends are also coming, I heard you dance well.

Inspector comes to Chandar and Mohini and tells about some unknown call. He ask them to come for interrogation. They both doubt on each other. Raj says we are playing this game. Mannu says we have to keep an eye on him. Inspector comes to them and they smile. Raj praises his friend’s acting. Mannu says this should end, then I will leave with Simran. Raj thinks I know I have hurt Preet, very soon I will confess my love, then we will always be together, this is my promise. She cries and sees him.