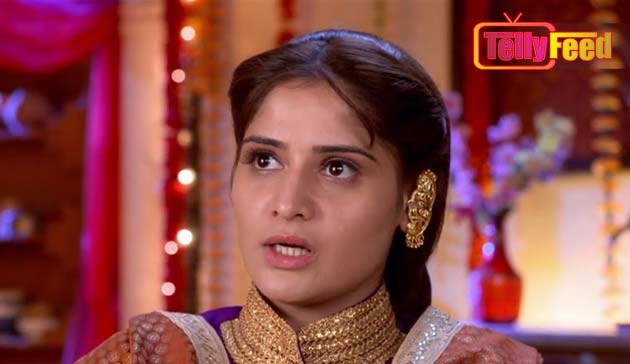 Mannu panicking and saying I will not give Simran to Chandar. Raj asks her to calm down. Mannu says I will kill him and go jail. Raj stops her and says we won’t let marriage happen. She says I have thought well, I will kill him. Raj gives her a knife and asks her to kill Chandar. She stops. He asks did you realize you are a girl. She asks do you think I m well. He says no, I want to say I like fearless Preet, who knows fighting and winning, we will not lose, we will fight and win, clothes don’t matter, you are always Mannu, Mannu can’t lose, if you got scared after becoming girl. She says I m not scared of anyone, shall I slap you. He smiles.

Sakshi and Rohan come there. Raj says we have to stop Simran’s marriage with Chandar, I want your support. They all join hands.

They hear Simran. Chandar and Simran play hide and seek. He sees her and touches. Mannu comes and takes Simran. She asks Chandar to stay away from Simran. Chandar asks her to calm down. He says Simran will become my wife and you will become my Saali. Raj and Rohan look on. Chandar says we will play more games, when we marry after two days. Simran smiles. Mannu stops Simran.

Mannu calls Rohan. Rohan comes and says I will play with you. Simran goes. Mannu scolds Chandar. He flirts with Mannu. She gets angry and holds his collar. She says I will end your game in two days. He asks her not to spoil his game, he will marry Simran and celebrate suhaagraat with her, when he gets done with her, then he will see her. Mannu gets angry. Raj and Sakshi hide and look on. Chandar goes.

Mannu goes to Raj. Raj says its not right time, stop. Mannu says I will not leave him, I will beat him with a slipper. Raj says fine go, I m with you. Amba comes to Jagan. Jagan thinks they all are fooling him, he has to find out. Amba says just you can stop this marriage. He says its your deeds’ result, you and your daughters solve this problem. She goes. Sukhi says we have to do something, just Simran’s blood can save you. Jagan says its fine, I have called other doctor, I can get blood by anyone, I won’t die so soon. Sukhi gets shocked.

Mannu says leave me, I will show Chandar his status. Harjeet and Mohini come to hear. Raj asks Mannu to calm down. Sakshi and Nihaal hold Mannu. Mannu scolds Mohini too. Harjeet says I will throw you out of this house. Mannu says Chandar is very mean, I would have not left him, I m not scared of panchayat. Raj tells Harjeet that Mannu has gone mad like Simran, Chandar came here and he is insulted, shame on Bajwas.

Chandar says Raj is filling Harjeet’s ears, its Raj and Mannu’s plan. Mohini says Harjeet doesn’t listen to Raj. Harjeet asks Mohini to do stay arrangements for Chandar in guest house. Chandar says Raj is blood, you are an illegitimate second wife, Raj and Preet don’t talk, its not like that, Raj and Preet are one, they think I will leave from here, let them think so. He asks about her daughter and thinks to end Raj and Preet’s game, everyone will know my powers.

Raj says we have to be careful Rohan, Chandar is a creep. Sukhi talks to Jagan as doctor. Jagan comes to hospital and catches him red handed. Sukhi gets shocked. Jagan slaps him. Sakshi and Mannu make Chandar hear them that Mannu is going for bath. Chandar smiles and looks
on. Chandar thinks to go and see Mannu.

Chandar comes there and sees Mannu’s dress. He goes to washrom and looks for Mannu. Raj searches for his phone. Chandar gets shocked seeing Rohan. Mannu and Sakshi hide and look on.

Rohan asks Chandar to take bath as well. He asks Chandar to sing and bath, so that people know someone is inside. He goes. Chandar gets angry and thinks to make joke of Mannu and Simran. He goes. Mannu says don’t know Raj got his number or not.

Jagan comes home and beats Sukhi. He scolds Amba. Babli asks why are you scolding Amba. Jagan scolds her. Raavi says forgive her, how can you beat her. Babli argues. Jagan says I forgot you all have Mannu, you all cheated me, see what I do now, till Simran gets married, none will come out of the room. He locks Babli and Sukhi in room.

Chandar looks for his phone. He gets the phone at other place and says someone came in my room. Raj gets number and gives to Mannu. Mannu thanks him. Sakshi tells how they fooled Chandar. Raj gets worried for Mannu. Sakshi says you care for Preet a lot, it doesn’t look you guys don’t have love in between, Rohan was in bathroom, not Preet. Mannu calls on someone and says your daughter has life risk from Chandar, trust me, I m sending you an address, meet us fast. She tells Raj that they have to keep that girl safe, this girl will become a witness. Sakshi asks who will take care of Simran if you go, I will go with Raj. Rohan says don’t worry for Simran, I will take care of her. Raj and Mannu leave.