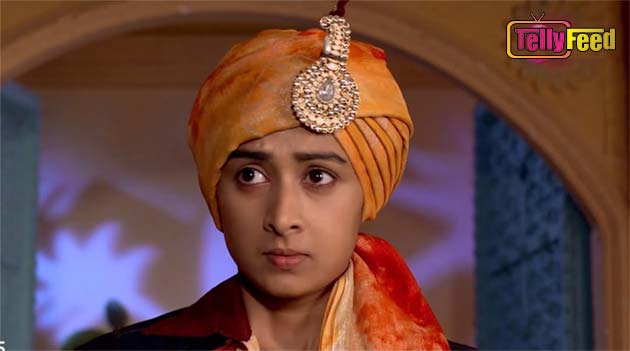 Rohan asks do you care for her, you shouldn’t care for all this unless you love her. Raj denies to understand it. Rohan says your heart knows this answer is right, its tough, I know, I also found it tough to accept that I love Simran, you love Preet, its better if you accept this soon, else none can stay happy. He goes. Raj says why does Rohan think so, I don’t love her, its just a compromise, I can’t love my enemy, who killed Raman.

Mohini goes to kill Simran. Chandar stops her. Mohini says I will be caught if she tells everyone the truth. He asks did she go mad. She says I will kill her and see you also, this happened because of two. She attacks him. He throws some powder on her. She gets dizzy. He smiles.

Raj sees Mannu. He thinks of Rohan’s words. Mannu walk to him. Sakshi comes and hugs him. She says your silence was worrying me, thanks for saving me, I have to talk a lot. She takes Raj. Raj sees Mannu and goes. Mannu cries. Chandar asks is she jealous seeing Raj with Sakshi. She asks him to move.

He holds her hand. He asks her to let her tears flow out, remember I saved your life, Raj has run away leaving you. Mannu goes. Chandar smiles.

Chandar going to Simran and eyeing her badly. Rohan comes and shouts Chandar, what are you doing here, get lost, will you go after getting beaten up. Chandar asks him to have almonds in morning. He makes fun of Rohan and goes. Simran wakes up. Rohan asks her to have medicines. She refuses. Chandar asks her to have medicines, she will get doll. She takes medicines and laughs. Rohan shuts the door on Chandar’s face. Chandar says you did my work.

Rohan covers up Simran. He sees her hurt and goes to check. Mannu comes and shouts. She makes Rohan away and scolds him. She says I can’t believe you can do away, you were taking advantage of her, I felt you won’t let anything happen wrong with her. He says you are thinking wrong. She shouts on him. Raj and Sakshi come. Mannu
asks Raj to manage Rohan.

Rohan says Raj I was not doing anything, she has misunderstanding. Mannu asks how can you think of using her innocence. Raj asks her to mind her language, he is my brother, he has always handled Simran. Mannu says I reached on time and saw the truth of Bajwas son, I can’t trust Bajwas. Raj raises hand and stops. Mannu says truth is bitter, we did mistake to trust you Bajwas.

Chandar asks Mohini to see what’s happening, this powder will save us from everyone, its mixed in Simran’s medicine, she will lose her memory. Mohini smiles. She asks how will you add this. He says I have already added this, if anyone knows, blame will come on Rohan. Raj asks Rohan to come. They leave. Mannu cries and thinks Rohan forgive me for this cheap plan, it was imp to succeed my plan.

Chandar says Preet played a game with me, I will tell her what I m, she will regret a lot. He gets a call and goes. Mohini smiles. Raj says what did Mannu do, I was going to save her. Mannu stays with Simran and says I have to do this to save Simran’s life, I have to ruin Mohini and Chandar’s plan.

Chandar goes out of the house. He goes upstairs and meets Jagan. Jagan says we always meet somewhere, Amba and her daughters have fooled me a lot. Chandar says even Babli is smart, she played a game with me. Jagan says they all trouble. Chandar says my marriage is delayed for 15 days, if this happens in 4 days, if Amba tells this to panchayat, they won’t refuse. Jagan says your work will be done, just keep your plans ready. They hug. Chandar thinks none can stop this marriage from happening in 4 days now.

Mannu comes to room. Raj asks how did you think so about Rohan. She sees some shadow and says I have heard enough, no more clarifications. She goes and wishes she could tell Raj. Chandar stops her and flirts. She pushes him away and scolds. She thinks he likes to see girls crying, now see how a girl’s tears bring a storm, I will ruin your world, I will trap you in my drama. She goes.

Chandar thinks is she trapping me by her drama, I will clear things tomorrow morning. Its morning, Chandar sees Rohan. Rohan says I didn’t do anything with Simran. Chandar says I will do whatever I have to, get up. Drunken Rohan goes. Mohini asks why did you ask for rat poison. Chandar says I will add poison in Raj’s milk, you tell this to Preet, if she loves him, she will stop him, I have to see, if she hates him, she won’t stop him, then I will play my game.

Everyone finding Babli. They hear her voice. Jagan comes and shows Babli’s video. Babli shouts for help. They get shocked seeing video. He says I kidnapped her, don’t worry. They look at him. Raj sees Mannu. Sakshi boils milk and takes for Raj. Mohini smiles and holds the poison bottle. She signs Chandar.

Jagan says don’t teach me, there is nothing to have shame. Amba says you have hidden Babli. Jagan asks how was Babli looking in bridal dress. Sukhi says you are doing wrong. Jagan scolds him. Amba asks what do you want. He says Amba understands, she came to point, Amba will go to panchayat and get Simran and Chandar’s marriage mahurat in 3 days. Amba says I will not let this happen, I will die. He says I won’t let you die, if Chandar doesn’t marry Simran, he will marry Babli. They get shocked.

Sakshi gets breakfast for Raj. Mannu looks on and goes. Chandar comes there. Mohini makes Mannu hear about rat poison fallen in milk, which Sakshi took for Raj. Mannu gets shocked. She goes to see. Sakshi says Raj sorry, I will get pickles. She thanks Raj and holds his hand. Mannu says he left me to die, why shall I save him. Mohini stops Raj and says this milk has poison. Sakshi says its not possible, I got this rat poison bottle there. Mohini says ask Preet, she was also there. Sakshi asks Mannu did she know this. Mannu says yes. Sakshi scolds her. Raj thinks what happened to Preet, she didn’t stop me knowing the milk has poison. Mannu goes to room and cries. Rohan asks why are you crying, Raj is fine. He recalls Mannu telling her plan to do acting to show Chandar and Mohini that their unity broke.

He says your plan was good to know Chandar. She nods. He recalls hearing Chandar’s plan to just keep empty bottle. Rohan says we will include Raj in our plan, don’t worry, I remember well, I asked you who are you and you said I can regard you sister, you are hiding sorrow from me, why are you filling poison in Raj’s heart. She says so that he stays happy when I go. He asks where are you going. She says Raj and I have a contract, Raj will help me in getting Simran’s memory back, then I will leave from this house, maybe our relation is made on hatred and will break.

Sakshi asks Raj to break this relation, Preet did limit too, if anything happened to you. Raj thinks why is Preet behaving this way, she didn’t tell me about poison. Rohan says no, you can end the distance if you want. Mannu cries and says nothing can get fine now, thanks for support, you have always saved Simran, promise me you will never tell this to Raj. He goes.