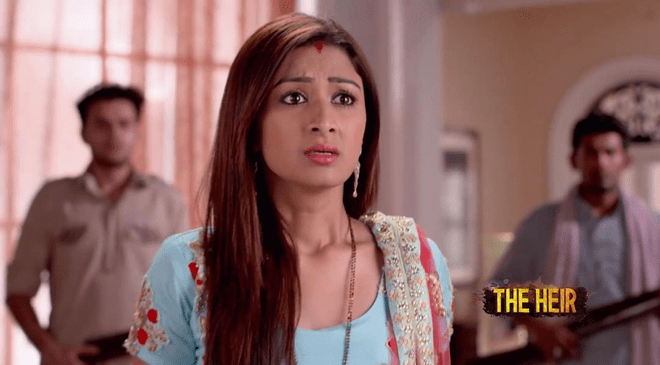 Jagan says you should be ashamed to get them like this. The men get against Mannu as Raj kidnapped them. Raj says Chandar didn’t let her come to panchayat, she was threatened and kept at home, how could she come there. The man says we can’t change panchayat rules for her, we got insulted, woman should better think of family than panchayat.

Mannu stops them. She says you all are right, did you try to know why this happened, because you didn’t give us a chance to manage duties, if a woman can manage house, family, children…. she can manage country too, can you manage a family, if a woman can deliver a child by bearing pain, she can understand the pain of a country too, can a man bear such pain, I want a society of equality, if we make a girl strong, society will become strong on its own, now decision is in sarpanch’s hands.

Jagan says we heard a lot from Mannu. Raj says we heard a lot from you also, everyone knows your black deeds, it will be better if you let sarpanch decide. Sarpanch says I have seen Preet since childhood, she has seen a lot in her life, she has always faced problems with courage, she never tried to get power in hands, she always tried to work for society, she want equality, so I want her to get this chance. Amba and Jagan get shocked. Mannu signs the form. She takes sarpanch’s blessings. He asks her to work hard for the village. Raj thanks sarpanch. Panchayat leaves.

Mannu and all the women dance. Mannu says mummy, I went against your wish, not against you, I want you to be proud of me, bless me. Amba gets back. She says one regrets for mistake. She goes. Chandar comes. He stares at Raj and Mannu. Raj hugs Mannu. She cries. Amba and Jagan see Chandar. Jagan signs Chandar to come. Chandar goes to Amba and Jagan. He says my plan spoiled because of you, you couldn’t manage one girl, Preet signed, she will become sarpanch, what will you do then.

Amba says we stopped her at home, what could you do, you couldn’t stop Raj. Chandar says better keep quiet, she would have locked in bathroom if you didn’t free her, I have seen Salim and Anarkali’s romance, were you seeing the drama, Raj will end your relation with Mannu, think how will you save her from Raj and who can help you.

Chandar asking Amba to let him stay in her house if she wants Raj and Mannu away. Amba refuses. Jagan tells him that Amba will never agree for this. Chandar says I have to come in this house, Amba has to break down. Rohan asks Simran to have sweets. She throws the sweets. He holds her hand. She scolds him. He says love is needed to hold wife’s hand. She says just Raman will be my love and husband, I will not like to drink even water at the time of death.

He forcibly feeds her sweets. She slaps him. He gets angry and asks what bad did I do with you, you have to tell me, what’s your problem. She asks him to leave her hand. Raj comes and asks Rohan to leave her. Rohan says I want to know what’s her problem. Raj pushes him. Simran runs. Raj says sorry and gives hand. Rohan gets

angry and pushes Raj.
He asks why did you come between us. Raj says you are doing wrong, Simran won’t agree this way. Rohan scolds him. Mannu comes and says Raj is right, you need to have patience. Rohan says I love her, what did Raj do for me. He goes. Chandar looks on and smiles. Raj says I understand his pain, he will be fine if he stays alone for some time.

Rohan recalls Simran and cries. Chandar comes and taunts. He says Raj forgot you in Preet’s love, you have misunderstanding, that Raj and Preet will unite you, this won’t happen. Rohan starts leaving. Chandar fills his ears. He says Raj and Mannu would be romancing, they have no time for you, they don’t care, they would be thinking how to win in elections. Gunjan and Babli come to Raj and Mannu. Raj says Preet did planning for sarpanch elections. Mannu says men won’t give me votes, just women may give votes, women should get right to vote, I m sure I will win.

Gunjan says but women didn’t get right to vote. Mannu says this change can occur if sarpanch wants. Gunjan says even if he agrees, can other panchayat agrees. Raj says we have strange rules here, just men give votes here, a woman is not trusted that she can give vote. Mannu says it would be good if Amba and Simran were with us. Gunjan says we can’t lose like this, you will win. Raj says yes, I can understand what she is going through, if mum is along, victory happiness gets double, we will convince them. Gunjan says we have to get Simran and Rohan together. Mannu nods. Rohan holds Chandar’s collar. Chandar says show this anger to Raj, he got his Preet, he made you a fool.

Rohan leaves him. Chandar says you can’t believe Raj played a game with you, I will give you proof, call Raj and ask him did Amba give him offer, if he gets away from Preet, she will unite you and Simran, did he tell this to you, what would you do being in his place, you would have thought about him. Rohan gives his phone. Chandar calls Raj.

Rohan asks Raj about Amba’s promise. Raj says yes but…. Chandar ends call. Raj says I knew she will separate us and not unite you and Simran. Raj leaves from the room. Chandar asks did you get peace now, you also think for yourself, Amba and Simran listen to me well, join hands with me, I promise I will make Simran believe that you love her. Rohan takes his phone and leaves. Chandar drinks.

Its morning, Mannu comes to Simran. She says Rohan always supported you. Simran says Rohan tried to take Raman’s place. Mannu says you behaved wrong with him, did mummy teach this to us, you should apologize to him at least to respect Amba’s upbringing. Jagan looks on and calls Chandar. Chandar laughs. He says now Simran will apologize to Rohan, I will use Rohan’s love and make Preet lose in elections.

Rohan thinking of Chandar’s words. Simran comes to him and apologizes. She goes. Chandar asks are you happy now, I have done all this, join hands with me, Amba will manage everything, don’t worry. Rohan asks what do I have to do. Chandar says Raj is busy with Preet, he won’t be able to understand you, just go after Simran and tell her what I tell you.

Mannu and Gunjan come downstairs. Gunjan asks Mannu to take care. Mannu asks her to touch Amba’s feet. Gunjan taunts Amba. She hugs Mannu and leaves. Amba looks on. Mannu goes. Simran comes and says we were afraid for this, Raj is cheating Preet, he wants to become sarpanch. Amba asks who told you. Simran says Rohan told me, Harjeet said Bajwa will rule in this pind. Chandar comes and does drama. Simran says Rohan

won’t lie to me. Chandar says enemies started playing their game, are you ready to face them, tell me, just permit me to stay here, I will break their legs.

Mannu and Raj come to panchayat office. Raj asks her to explain sarpanch, women will get voting rights. Mannu says I have to convince him. He says I m sure if you smile, he will agree, your smile is very lovely. She smiles. She goes. Raj calls Rohan. He asks are you fine. Rohan asks why. Raj says trust me, I did that for your good. Rohan says fine, anything else. Raj says who told you about the deal. Rohan says just like that, I tried to talk to Simran, she told me. Raj says I trust your love, we will convince Simran. Rohan ends call and recalls Chandar’s words.

Sarpanch says women don’t do voting here. Mannu says no woman stood for sarpanch post before, why is this not possible, I want the women to get their rights, you can help me. He says I will think on this matter, have patience. She says sure, I made women’s list. Peon stops panchayat member from going inside and says Sarpanch is talking to Preet. The panchayat member calls the other man, and tells about Preet talking to sarpanch in closed room. Mannu leaves. The man confronts sarpanch. Sarpanch scolds him and says she is like my daughter, let everyone come, then we will talk. Mannu and Raj come home. They see Chandar shifting.

Mannu gets angry on Chandar and asks him to leave. Amba stops Mannu and asks her to talk to her, she has got Chandar here. Mannu asks what is he doing here. Amba says its my house, you divided my house for Raj, by what right can you call this our house. Mannu cries. She says you got blind, you can’t see difference between son in law and enemy, you forgot how much we worked hard to make this devil away, I will not let him stay here. Raj stops her. Mannu says I will kill him. Raj takes her upstairs.