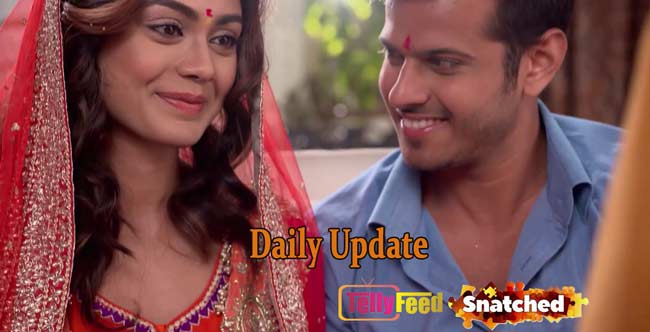 Ajay says got get ready. Sanjana is getting ready in her room. Ajju clambers in in. Ajay is out on his bike. sanjana says leave me. Ajju grasps and ropes her. He blindfolds her. He says you were touching him? Touch him now. Call him now. Its just me and you now. We will love like we used to. He shoves her on the bed. Sanjana tries to run. shreya says there is some noise. Like someone is falling. Ajju tries to touch her but sanjana is running from him. Ajju says no one is coming to save you. I still love you. I am ready to forget everything.

Shreya says i guess it from sanjana’s room. Ajju shoves sanjana on bed. He takes off his jacket. Mishri comes and hits ajju on head. She releases Sanjana.
they see ajju in all blood. Sanjana hugs mishri. Ajay comes in. He is dazed to see ajju. Shreya comes in and says what happened? why was there so much noise? did someone fall? Ajay says yes all okay. Mishri fell and dropped everything. Shreya says you people are concealing something? Ajay says no.

Ajay checks ajju’s heartbeat. He says ajju is dead. They are all shocked. Mishri starts crying. she says i hit him. She says i killed him? sanjana says please clam down. you didn’t do anything. She hugs her. Ajay picks ajju up and they take the deadbody out from back door. They hide the body in plants.

Ajay sanjana and mishri hide ajju’s body. Bhushan and everyone knocks at the door. After some time mishri opens. Bhushan says what were you three doing? Why you took so long. sanjana says the door was jammed.
Shreya says don’t lie sanjana. She is lying so she could save me. I slipped with pooja stuff and it fell down. They were scared that you will scold at me. Dadi says its okay. Lets go now.
They all do the pooja. Shreya says check table’s leg first. It maybe weak. Amar checks and says yes it is weak. Bhushan says how did you know? She says i know these catters. They once sent the same weak tables at my mom’s place. Kilrok says bring those bags and put it under table.

Sanjana says don’t worry God sent you to save me. Mishir says i killed him. Sanjana says everything will be fine don’t worry. she hugs her.
Everyone is busy with arti.
Ajay sanjana and mishri put ajjy in a bag and take him to store room. They come out.
Ajay says lets go out or everyone will doubt. We will meet again tonight and decide what to do. Mishri says i am really scared. Ajay says i am here with you don’t worry.
They join the pooja again.
Shreya comes to store room and says you thought you could fool me? You know nothing about my secret. she recalls jumping from the cliff. She has an actor there there.
She had bought the doctor too. Shreya says i will show you your worth sanjana. Bhushan hates me because of you. You will have to pay for this. now the real game has started.

sanjana says you know God mishri did this to save me. please save us. dadi says to shreya what happened? God has given you everything. Sanjana says nothing just praying it feels so good.
Elaichi says everything went so well. Shreya hits a pot with her stick. They al ask are you okay>? She says yes. Kirlok says how the vase came her.e

Mishir says in temple yes i killed ajju but trying to save Sanjana. Sanjana says please help us God you know it was not our mistake. Please help us God. Shreya wonders at night what are these three upto. I should go and check. She stands up and tries to unbolt the door. Bhushan wakes up and asks where are you going? She says i was suffocating in the room, so I wanted to go to temple. Bhushan unbolts the door for her. She says you go sleep i will go alone. Bhushan sleeps. Shreya says in our differences will wither away just let my plan work for once.

Shreya locks them in the garage. Later shreya says she heard some voice from the garage. Amar bhushan kirlok and vinati come there to check.
Kirlok says the key must be in your room. Bhushan says let me go and check. Shreya comes and says i was worried so i came here. Sanjana saari get stuck in the screw. Ajay helps her and they clamber out.
Amar says no one is here. Shreya says in heart where have they gone. Kirlok says when i came here last night the car was open. He opens the back to check but shreya says they have come.
Shreya says i will come in a while dadi. Ajay sanjana and mishri jump out.
Elaichi asks sanjana ajay and mishri where did you three go? Mishri says were talking at night so we went out to talk. Kirlok says don’t lie. Tell me what is it? Dadi says dont be a cop. They are a new couple. let them go out. vinati says mishri you were with them too.