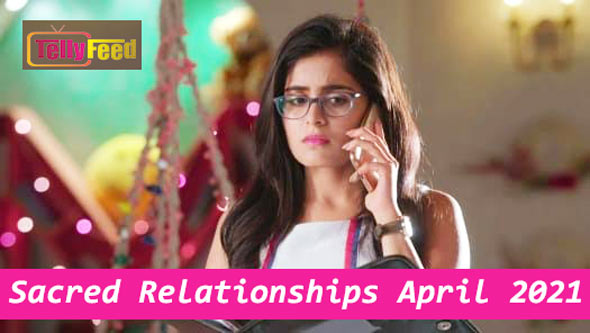 Abir and Mishti spend some pleasant time together. Later, he tries to tell her the truth about Kunal after witnessing a shocking scene in the latter’s room. Read Sacred Relationship April 2021 Teasers:

Abir promises to expose Meenakshi if Kunal does not reach the mandap on time. Later, Parul unravels a dark secret from the past.

Meenakshi blackmails Kunal into getting married. Later, Abir berates him for his cowardice while the marriage procession arrives at the Maheshwari Mansion.

As the Jaymala ritual commences, Mishti prepares to board a flight. Elsewhere, Kunal is furious while Abir rushes to the airport on horseback.

Mishti and Abir confess their love while Kunal threatens Meenakshi of dire consequences. Later, an inauspicious event halts the wedding.

Abir brings Mishti to the wedding, leaving Kunal infuriated. Later, she is startled when Kunal whispers something shocking into her ears before Kuhu’s Vidaai.

Vishambhar makes an unexpected announcement regarding Mishti while Rajshri asks her for a favour. Later, Kuhu feels shattered when Kunal does the unthinkable during their first night.

While Mishti gets into a silly banter with Abir, Kuhu blames her for all her miseries.Later, the family prepares for the paghphera ritual.

Mishti and Abir get romantic while Kunal orders Kuhu to tell the truth about their marriage to her family. Later, Mishti gets worried on seeing a dejected Kuhu.

Kuhu leaves Mishti teary-eyed for interfering in her life while Varsha confronts Kuhu about her marriage. Later, Mishti cancels her date with Abir.

Mishti is taken aback by Abir’s romantic surprise while Kuhu threatens to spread rumours about Kunal. Later, Abir has a unique challenge for Mishti.

Abir wants Mishti to propose to him in front of the family. Later, she gets suspicious of Kunal and Kuhu’s relationship.

Abir and Mishti compete in a dance off against Kunal and Kuhu. Later, Kuhu gets jealous of them while Meenakshi threatens Mishti.

Mishti proposes to Abir during the matki tod competition. Later, Kunal plans for a divorce when Kuhu’s jealousy paves the way for a deadly mishap.

Abir struggles to contact Mishti while Kunal and Kuhu get into an argument. Later, Abir and Mishti share a romantic moment.

Abir and Mishti spend some pleasant time together. Later, he tries to tell her the truth about Kunal after witnessing a shocking scene in the latter’s room.

Kunal decides to do the unthinkable after talking to his lawyer. Later, an unaware Abir hatches a brilliant plan to get Kuhu and Kunal to go on their honeymoon.

Kunal decides to do the unthinkable after talking to his lawyer. Later, an unaware Abir hatches a brilliant plan to get Kuhu and Kunal to go on their honeymoon.

A disguised Abir and Mishti get romantic while Meenakshi warns a stranger to stay away from him. Later, the Raajvansh’s celebrate Ganesh Chaturthi.

Mishti is baffled to spot Meenakshi in Mumbai while Kuhu confronts Kunal about his odd behaviour. Later, Abir and Mishti share a romantic moment in his room.

Mishti plans a romantic surprise for Abir on the occasion of Ganesh Puja. Abir’s stunt lands him in danger while Kunal berates Mishti.

Abir is in a dilemma after Kunal asks him to do the unthinkable. Later, Mishti tries to help Abir while Meenakshi experiences a dreadful feeling.

Abir and Mishti risk their lives to save a stranger from drowning. Elsewhere, Kunal saves Meenakshi from an accident and gets into an argument with Kuhu.

Abir prepares Kunal’s favourite food with the hope to reconcile with him. Later, Kuhu overhears Abir’s conversation with Mishti and alerts Kunal.

The Maheshwaris get enraged after seeing Mishti and Abir locked in an embrace. Later, Varsha asks her to do the unthinkable.

Kaushal and Yashpal inform Meenakshi about Mehul’s arrival while Abir reconciles with Kunal. Later, Abir tries to convince Vishambhar of his relationship.

Abir gets upset after receiving a strange call. Elsewhere, Mehul is hell-bent on meeting Abir and Kunal while Meenakshi warns him of the dire consequences.

Parul befriends Meenakshi while Abir is shocked to hear the latter’s conversation with Yashpal. Elsewhere, Kuhu gets suspicious of Kunal’s activities.

Abir demands the truth from Meenakshi while Mishti saves Mehul from Laxman’s goons. Later, Abir decides to search for his father.

Mishti struggles to arrange a way for Abir to visit Mumbai while she stumbles upon a shocking truth about Mehul. Later, Meenakshi takes a solemn vow.

Abir learns that someone is spying on him while Mishti tries to reach him to reveal the truth. Later, the family is stunned when a dejected Abir decides to leave the house.

While Abir decides to leave the house, Mishti brings in an unlikely guest to surprise him. Who could that be?

The Maheshwaris are worried about Mishti’s safety while Mehul narrates the past to Abir. Later, the family plans a surprise birthday bash for Abir.

Mehul makes a shocking confession to Abir while Kuhu is taken aback by Kunal’s apology. Later, a confused Mishti is hesitant to meet Abir at his birthday party.

Abir and Mishti have an intimate conversation. While an angry group of villagers beats up Mehul, the family is left speechless by his confession.

Kunal makes a promise to a dejected Meenakshi. While Mehul overhears Kuhu’s conversation with Jasmeet, Abir talks to him about the past.

Mehul takes Abir to the Maheshwari household with a plan in mind. Later, Meenakshi and Yashpal are left speechless when Abir delivers some stunning news.

Abir feels helpless when his family forsakes him. Later, Kunal takes an unexpected decision after Kuhu confronts him about his bond with Abir.

Abir decks Mishti up for the Dandiya night. Later, the Raajvanshs gear up for the event, unaware of the danger approaching Meenakshi.

Kunal shatters Kuhu by handing her the divorce papers. Later, Mishti slaps him in front of everyone and reveals his truth to a stunned Abir.

Abir realises his folly after finding Mishti’s love letters. Later, he shares an emotional moment with Kuhu while the latter leaves the Raajvansh house.

Abir considers Mehul’s advice and shares his emotional dilemma with Mishti. Meanwhile, the truth behind Meenakshi’s stolen necklace is revealed.

Mishti spots Mehul with a necklace during the Dussera celebrations. Later, Abir gets shocked when Meenakshi makes a proposition about his marriage.

Mehul notices Meenakshi’s stroke of genius and hatches a plan involving Kunal. Later, Kunal stuns everyone with his firm move against Mishti.

While Mishti has a brilliant idea, Mehul finds a way to enter the Mishbir household. Later, Yashpal gives an elated Mishti a special gift.

Mishti sneaks into Mehul’s abandoned house. While Abir offers to help a tensed Kuhu, Kunal is shocked to spot her with a guy at a restaurant.

Kuhu awaits Kunal as the Raajvanshs arrive at the Maheshwari’s for Karva Chauth. Later, Mishti falls unconscious while performing the ritual.

Abir is infuriated on learning about Mishti’s inquiry while she misleads him. Elsewhere, Kunal gives a big surprise to his family which irks Kuhu.

While Parul confronts Mehul about his intentions, Abir and Mishti get romantic during a bus ride. Later, Kunal assures Meenakshi of fulfilling her wishes.

Mishti consoles Abir while Meenakshi pleads her to save him from Mehul. Later, Kuhu questions Mishti in front of Abir and family.

Abir is sad about hurting his family while Mehul gives him a present. Meanwhile, Kuhu lies to Rajshri on Mishti’s behalf as the latter tries to sneak out.