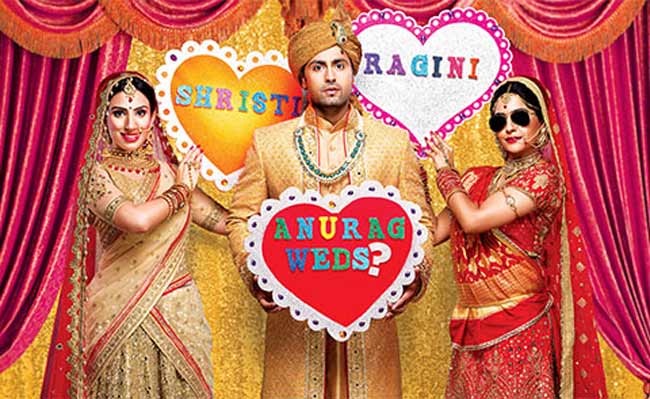 Vidhvan fumes in anger when his aid informs him that Vidhvan is taking Anurag’s baraat to some other place. He says he tried to be good and is facing all this, orders pandit to start marriage preparations and Parag to gather all their goons to kidnap baraat. Ragini says she will accompany him. He asks to get ready for marriage and greet baraat.

Guests start flowing at marriage venue and Purshotam greets them. His guests congratulate him that he got damad like Anurag so easily. Shristi gets ready as bride. He mother comes and says baraat must be coming soon. She says let them bear her nakhras and laughs. Mother asks if she is happy with this marriage. Shristi says yes.

Vidhvan heads baraat towards marriage venue in bus and cars when Vikral with his men stops vehicles. Vidvhan asks what is happening. Brij says Vikral has come with his goons. Vidhvan gets out of car and asks what is happening. Vikral says baraat will go to his house. Vidhvan asks why so, it will go to where it has to. Vikral asks if he is selling his son to many other places. Vidhvan shouts what does he means. Vikral calls Brij. Vidhvan reminisces ordering Brij to return money and slaps him. Vikral says his drama will not work here and baraat will follow his vehicle. Vidhvan asks what if it does not. Vikral points gun on him. Anurag reacts. Vikral orders his goons to shoot Vishu. Vidhvan pleads not to. Vikral with his goons kidnaps Anuraag and baraat and spares Vishu and Vidhvan. At home, Daadi tells her marriage story and then Vidhvan and Brij’s. Vidhvan returns home with Vishu and informs what happened.

Ragini gets ready for marriage. Her amma says why she is forcing Anurag to marry her when he does not want to. She says she just knows that she loves Anurag and needs him. Purshotam calls Vidhvan and asks when is baraat coming. Vidhvan informs baraat will not come. Purshotam shatters. Sumer comes and asks what happened. Purshotam informs baraat is not coming. Sumer promises he will bring baraat here and leaves. Vidhvan Singh kidnaps Anurag with baraat and reaches home. He orders Brij to stop repenting and get Anurag ready for marriage. Purshotam shatters when he hears baraat is not coming. Sumer hears everything and leaves promising he will bring Anurag’s baraat here. Shristi sees that and shatters. Daadi yells that their family name is spoilt, it is better she would have died. Surekha warns her to shut her mouth for god’s sake.

Anurag does not agree. Vidhvan scolds Revati that because of her greed. Vikral alleged that he sold his son for 20 lakhs and is selling at some other place. Sumer comes holding gun and shouts to come out. Vidhvan comes out and Sumer says he ruined Purshotam’s dignity. Vidhvan tells whole incident. Sumer says because of their mistake, his family’s dignity is lost. Daadi says baarat will go to his house for sure and sends Vishu forward, indicating he will marry Shristi.

Shristi goes to her room and shatters. Her mother consoles her. Vidhvan reaches with his family. Purshotam says Vidhvan has agreed to get his second son married to Shristi. Shristi sees insane Vishu and says she cannot see his father’s dignity being ruined, but cannot follow wrong ritual, so she will not marry. Purshotam says he will respect her decision.

Anurag gets out of car. Parag says it is abshagun. Anurag says he looks eductate,d but why he is letting his sister’s life ruined. He goes and informs Ragini. Ragini fume and says she will shoot Anurag. Vikral enters and says shooting is very easy, but difficult to think whom to shoot. She cannot shoot Anurag now, but someone. His wife says they are doing wrong. He shuts her mouth.

Revati asks Divya to call Vidhvan. She tries repeatedly and says his number is not connecting. She calls Brij and Anurag and even their numbers don’t connect. Daadi says whatever is sown should be reaped, she should be patient. Revati fumes.

Brij tries to convince Anurag to marry Raginig, but Anurag gets adamant. Vikral comes holding gun and takes Brij in saying he wants to settle the issues. He shows Ragini and says he did not see his daughter crying in 22 years, now she is crying because of him. He came with alliance and gave money, if they did not this alliance, they should have rejected his proposal. Brij says he made a mistake and to forgive him. Vikral says he punishes people and does not forgives. He points gun on Brij’s forehead and is about to shoot when Anurag comes and lifts his hand up and he fires in air. Anurag agrees for marriage.