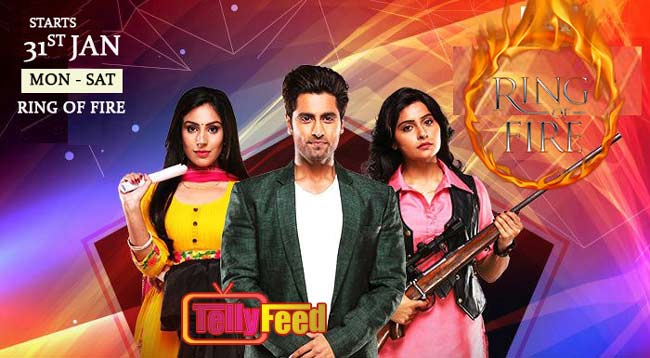 Anurag thinks he should apologize Ragini for misunderstanding her. Ragini sees Shekhar hiding and pulls him away. He pushes Ragini and runs. Anurag holds him and beats shouting how dare he is to touch Ragini. Police surround Shekhar. Anurag asks to take him in front of everyone and show his cruel face. Vishu apologizes Shristi and says he is not smart like Shekhar, so he doubted her unnecessarily.

Shristi says she wants an innocent partner like him and hugs him. Revati fumes, but Dulari stops him. Police brings Shekhar. Shekhar stouts at Vishu to leave Shristi. Purshotam slaps Shekhar and confronts that he considered him student and gave knowledge, but he betrayed him and eyed on his daughter. Parag asks him not to spoil his hands and let law do its job. He thanks Ragini for calling himhere. Shristi also apologizes Ragini and says situation made her feel doubt Ragini.

Ragini confronts Anurag and asks he realized truth now and says one who holds pen is not good and one who holds gun is not always wrong, he will blame always her family. She will fulfill her promise of leaving him once she proves herself innocent and walks. Anurag walks behind her. Shekhar pulls inspector’s gun and shoots at Ragini. Anurag comes in between to protect Ragini and bears bullet. Ragini and whole family rush towards Anurag. Police catch Shekhar and take him away.

Anurag is taken to hospital by whole family. Doctors operate on him. Ragini prays god that misterji saved her and risked his life, she should die instead of misterji. Shristi asks not to say that. Ragini says her misterji is so innocent, he cannot harm anyone, why has to suffer. She goes to hospital prayer area and prays matarani for Anurag. Operation finishes and doc comes out. Ragini asks if misterji is fine. Doc says patient is out of danger, but bullet touched his brain nerve and he may lose vision or some other organ. Vikral and his wife come. Ragini runs and hugs them and cries. Vikral consoles her. Ragini’s mother asks Revati who shot damadji/Anurag. Revathi says because of whom, this accident happened is important, pointing at Shristi. Ragini tries to enter ICU, but Revathi stops her.