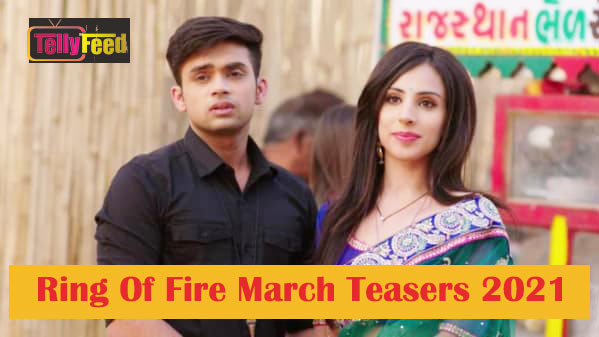 Vishu falls down from a high wall. Ragini tells Vidvaan that Vishu is no longer alive. Soon after, everyone cries and mourns his death. Below are Ring of Fire March 2021 Teasers:

Anurag tells everyone that Shrishti attempted to kill Ragini, which leaves them stunned. Ragini speaks to a psychiatrist regarding Shrishti’s predicament. Later, Shrishti learns from Ragini that someone is trying to hypnotise Shrishti. Consequently, Ragini assumes that a woman of their family is responsible for this. Later, Revati fears that the pundit’s prediction might come true.

Ragini tells Shrishti that a woman is trying to control Shrishti via hypnosis. The same woman wants Shrishti to kill Vishnu. Ragini enters and tells everyone that Shrishti is innocent and that the real culprit is Rajjo.

Ragini and Shrishti find Vishnu in the wall and manage to save him in time.  Ragini says that Rajeshwari is behind all the bad things that have been happening in the house. Anurag writes short poems for Ragini and asks her to meet him in the room. He gifts her a bouquet of roses and they end up spending a romantic evening together. Meanwhile, Vishu apologises to Shrishti and asks her to give him a second chance.

Ragini eavesdrops on Revati and Vidvaan’s conversation and learns that Revati expects Anurag to return to London. Vishnu brings food for Ragini and Anurag but they say they will eat only when Revathi forgives them.

The next day, Anurag threatens to jump off the balcony and kill himself if Revathi doesn’t forgive him.  Revathi tells Anurag and Vishu to stay away from Shrishti and Ragini for seven days as she has kept a puja for them. A livid Brijvan leaves the room when Rohini offers him a gift. Later, Ragini and Shrishti try to reason with Rohini and Brijvan and help them sort their issues out.

The entire family watches the couples romance while drunk.

Ragini And Shristi’s presents Surprise Gifts For Anurag And Vishu. However, Ragin/Shristi And Revathi’s Gifts Get Exchanged.

Anurag and Ragini prepare for their apology speech to Revati. Revathi makes New Plans To Separate Ragini And Anurag.

The pooja begins. Thereafter, the pandit arrives and informs Ragini that if she goes to the temple before sunset and offers water to Lord Shiva, she will be forgiven.

Its Valentine, and Anurag arrives and surprises Ragini.

Dadi collapses and Anurag yells at Ragini, which upsets her. Rohini accuses Revati of using Dadi to separate Anurag and Ragini. Later, Rohini tells the two couples that she is sending them to Udaipur for a honeymoon. When a goon tries to attack Srishti’s father in his office, Vishu beats him up. Further, Dulaari is told by Revati that Ragini is not good enough for Anurag and that she wants to throw Ragini out of his life.

Suraj takes the cheque from Pankaj and pushes him in front of a moving bus. Soon after, the family checks into a hotel, Revati enters Anurag and Ragini’s room when Anurag tries to flirt with Ragini. At the pool of the hotel, Ragini is told by Anurag that everyone has to wear a swimming costume but she refuses to wear one. Meanwhile, Vishu takes Shrishti shopping and sings a song with her.

Brij throws insurance agent Suraj out of his house. When Anurag meets an old female friend at the hotel, Ragini feels jealous. Vishu surprises Srishti by decorating the entire room with candles. Furthermore, he also gives her a red nightdress to wear. They then go to sleep together. Elsewhere, Anurag takes Ragini to the pool and sing a romantic song.

The next day, Anurag’s mother tells Ragini that Anurag has gone to meet his friends from London. Later, Ragini meets Anurag’s friends. Anurag wonders whether Sangini is Ragini or not. After that, Vishu and Shrishti along with Anurag and Ragini  to watch a puppet show. Following that, Shrishti advises Ragini to dress up as Sangini to make Anurag jealous.

A strange man named Surya plants a poisonous scorpion, which climbs up on Shrishti’s shoulder. Later, while everyone plays a game of hide-and-seek, Surya spots Shrishti hiding and decides to kill her. Will he be successful? During a video call, Divya notices a familiar face in the background and tries to see clearly. But before she can see properly the call drops due to a shaky network.

Revati tries to fill Ragini’s ears against Anurag and tells her to continue testing Anurag through Sangini. Moreover, insurance agent Suraj tries to kill Srishti by attacking her with a knife, in a crowd. Sangini asks Anurag to accompany her for a boat ride. Later, Vishu and Srishti’s boat begins to fill up with water and they shout for help.

Ragini purposely questions Anurag about his day to test his loyalty and gets disappointed when he beats around the bush. Thereafter, everyone is tensed regarding Vishu and Shrishti’s whereabouts. Vishu and Shrishti spend the night in the shed and try to contact the family member the next morning but, they fail to do so. Meanwhile, Anurag’s mother is hell-bent on ruining her son’s honeymoon with Ragini.

Dulaari mixes a drug in Anurag’s drink. After he drinks it Anurag gets inebriated. Vishu gives Srishti an infinity ring. Later, Suraj follows Srishti and attacks her with a vase. Suraj drives off with Srishti in the boot of a car. Anurag wakes up in his hotel room. He realises that Sangini is Ragini. Ragini accuses him of being in love with Sangini. Furthermore, Vishu tries to reach Srishti.

Anurag tries to convince Ragini but she walks away from him. Elsewhere, Srishti stabs Suraj with a trident multiple times while Vishu falls down from a high wall. The police sends divers to find Vishu’s body in the water. Later, they find Suraj’s dead body. Ragini tells Vidvaan that Vishu is no longer alive. Soon after, everyone cries and mourns his death.

Anurag thanks Ragini for taking care of his brother. Ragini also requests Srishti to accept the reality of Vishu’s death. Unwillingly, Ragini has dinner with Anurag but refuses to sleep in the same room. The police officer tells Srishti that Suraj was hired by Bhola to kill her.

Ragini leaves with Vikral Singh who later comes to know all about Sangini. Anurag complains to Srishti that Ragini shouldn’t have left him under the given circumstances. Srishti then explains to Anurag why Ragini left him. Anurag goes to meet Ragini and creates a scene outside her house.

Later, Shrishti cries uncontrollably and keeps mourning Vishu’s death. Vikral assures Ragini that he will look for a better husband for her. But Ragini lets him know that she won’t re-marry. The neighbourhood women criticise Srishti for not wearing a white saree.

Anurag professes his love for Ragini in front of Vikral. Ragini goes on to declare that she will get married again, this time to someone who respects her more. Outside the temple, a hoodlum named Baiju misbehaves with the street vendors and throws colours on Shrishti. She gets very angry and threatens to call the police, after which he leaves.

Revati calls Anurag and requests him to come back. But he tells her that he will return only after he convinces Ragini to come with him. Ragini asks Vikral Singh to arrange for her meeting with a prospective groom, making Anurag worried. Meanwhile, Shrishti is shocked to see cops having a search warrant in her name.

Vikral hands Anurag the divorce papers but Anurag refuses to sign them. Soon after, Baiju informs Srishti that he got the drugs planted in her room. Baiju attacks Srishti in the lock-up.

Further, Anurag bribes some kids. When Ragini’s suitor comes, they attack him with balls covered with wet mud.

Baiju challenges Srishti with dire consequences. Vidvaan brings his entire family to live in another house. Afterwards, Abhimanyu and Anurag are invited for a game of Carrom by Ragini. Some men come to meet Srishti. They all address her as ‘Rosie’.

Abhimanyu eats a sweet dish made by Ragini and praises her culinary skills. This makes Anurag feel sad and jealous. Shrishti slaps Baiju, and drag him outside. She informs his mother of his deed and shows her the advertisement he published.

Abhimanyu teaches Ragini how to shoot and Anurag sees them. Thereafter, he spills chutney on Abhimanyu and breaks a glass due to jealousy. Later, Srishti sees Baiju with an old man and lectures him for harassing the old man. However, the old man tells Srishti that Baiju was helping him.

Shrishti takes Dadiji to the nearby temple where she accidentally falls on the puja thali. This infuriates everyone and the priest decides to shave her hair off for the sin that she has committed. Ragini creates havoc at her house after drinking juice spiked with alcohol which was meant for Abhimanyu. However, Baiju arrives at the right time and saves her from the angry mob.

Ragini asks Anurag why he mixed alcohol in her drink. Dadi invites Baiju home but when he arrives, Divya asks him to leave. Ragini regrets her behaviour with Abhimanyu and decide to apologise to him. Divya is suspicious of Baiju’s true intentions and questions his presence at the time when Revati was in a life-threatening situation.

Further, Ragini is visited by Abhimanyu, who tries to make her understand that he truly loves her. Anurag is worried because he has a flashback of Abhimanyu complimenting Ragini and is afraid of losing her. Baiju locates the place where Shrishti is kept captive by her father’s enemies and reaches there. He fights the ruffians and saves Shrishti. But when he wakes her up, she pushes him away assuming that it was him who kidnapped her.

Abhimanyu blatantly asks Anurag why he decided to stay back at Ragini’s house despite the differences in their relationship. Anurag is more hurt after Ragini’s father asks Ragini and Abhimanyu to spend more time alone in order to get to know each other.

Even after Baiju wins the fight competition, Shrishti refuses to make him his bodyguard and instead chooses Shankar for that position. Later, Anurag  decides to tweak Abhimanyu plans regarding his dinner with Ragini.