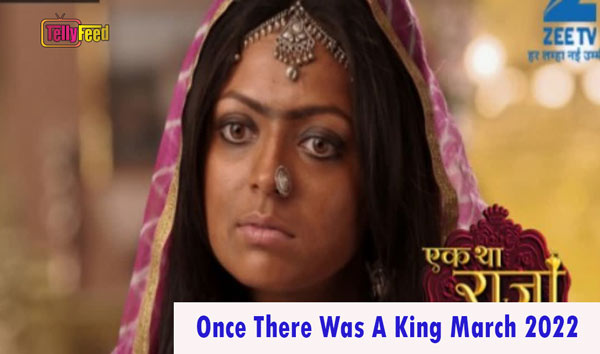 Once There Was A King March Teasers 2022

Gayatri talks about the child she is carrying and questions God about the child’s protection. Read Zeeworld Once There Was A King  March 2022 Teasers:

Zeeworld Once There Was A King  March 2022 Teasers

Lakshyaraj meets a fatal accident where he is stabbed by a trident in the chest. Badi Rani Maa finds an earring and concludes that Gayatri is alive and in the palace.

Next day, Badi Rani Maa decides to conduct the ‘shraadh’ for Gayatri and Savitri is surprised to see this. Kuwarji informs Savitri that he will ensure Swarna’s safety but Lakhan overhears this conversation and feels a ting of lies in Kuwarji’s words.

Badi Rani Maa senses danger and fires a bullet in anger. Savitri, who is actually Gayatri in disguise, realizes that she has made a big mistake as Indravadhan will not get closer to her enemy.

Indravadhan leaves Ragheshwari alone for a moment and she takes the opportunity to gulp down some wine.

Rageshwari places a sword on Badi Raani Maa’s neck. Lakhan asks Gayatri to take care of Swarnlekha but Gayatri refuses to grant the permission. Later, Gayatri is in the market when her mother comes across her.

Raj Mata urges Gayatri to think about the same and figure out who else was present at the cliff that day as she believes that the same person can reveal the true story about what happened there. Later, while Gayatri is coming down the stairs, she slips and hurts her leg.

Gayatri tells Rageshwari that it is because of her that Indravadhan has lost the love of his life. Badi Rani Maa keeps trying to put negative thoughts into Indravadhan’s mind against Gayatri. Indravadhan then informs Badi Rani Maa that he has decided to give Gayatri another chance to prove herself right.

Lakhan tells Indravadhan to celebrate the child that Swarnlekha would be bringing to the house. Lakhan confronts Indravadhan and requests him to send Swarnlekha along with him. Badi Raani Maa brings in the much awaited Kaal.

Badi Raani Maa orders Kaal to kill Gayatri and seeing Kaal attack Gayatri, Swarnlekha intervenes him and gets pierced with a flying knife. Kaal starts killing the castle guards and Indravadhan gets engaged in a one-on-one battle with Kaal. Raj Mata shows up in the scene and saves Lakhaan.

Gayatri also says that she would not be leaving Ameerkot at any cost and would strive to get justice for her husband’s death. Swarnlekha gives birth to a girl, while Gayatri’s child is also born. However, Gayatri’s daughter’s eyes are close when she’s born and she’s lying still. What will happen next?

Badi Raani Maa asks Kaal to visit Haamerkot and convince people to vote for him in the elections. Later, a sports a event is held by Kaal in which Raani too participates. Raani and her competitor climb a tall wall and walk across it. Accidentally, Raani stumbles and falls down.

Raani comes across Swarnalekha and she is instantly fond of the girl. Badi Raani Maa asks Kaal to sign on some papers and accidentally Kaal drops the pen on the floor. Badi Raani Maa tells that whichever woman completes cloth stitching challenge would receive a grand prize from Kaal.

Kaal says that one should kill others in order to rise up. Swarnlekha along with her daughter reaches a location as described on a note where she is confronted by a stranger, who tells her that he is her future husband. Rageshwari distributes food to all and finally Raj Mata is the only one left.

Badi Rani Maa later fills Raja’s ears against his father as she attends to his injuries. When Rani says that her full name is Rani Gayatri, Badi Rani Maa’s doubt becomes stronger. Rani takes Jeevan’s food right from under his nose and tells him that till the time he reveals the truth to Kaal, he would not get any food. However, Badi Rani Ma catches her and questions her as to what is she trying to do.

Rani figures out the meaning and knows that the answer to the riddle is her dog, Kali Prasad. Badi Rani Ma then gives Rani a punishment to clean the entire hallway in the Palace without any help.

Rageshwari expresses her disappointment towards Kaal for giving more importance to Swarnalekha. While playing the lifesize game of snake and ladders, Rani comes to the last stop and Badi Rani Ma asks her a tough riddle and also tells her that if she gives a wrong answer to that, she would be hit with a stick a hundred times.

Raja excitedly informs Rani about how he had spilled food on Jeevan’s clothes and had him scolded by Kaal. Raj Mata is shocked to see Kaal and Badi Rani Maa among the chief guests and leaves from the ceremony.

Raja meets Rani and gives her all his savings. Laakhan ends up shocked when he stands face to face with Swarnalekha and the two of them are instantly lost in each other. Meanwhile, Raja expresses his disappointment towards Badi Rani Maa for her behaviour against Rani.

Raja refuses to believe that Rani has befriended Jeevan but is furious when he sees the two of them playing around with each other. Meanwhile, Lakhan is trying to sneak into the palace to meet his daughter, Bindu.

Lakhan says that he can no longer wait to meet his daughter and wants to go with Swarnalekha to meet her, but she refuses and asks him to wait for one more day. Raani puts on the frock she was gifted and claims that nobody would recognize her at the Raj Mahal in her new attire.

Raja scolds Raani and says that he does not wish to talk to her. Raj Mata decides to follow a secret path to enter the Raj Mahal. On the other hand, Kaal scolds Raja and Jeevan for not concentrating on their education.

Later, the guards tells Badi Raani Maa that Lakhan might have lied in order to escape her. Months pass and Raja’s hatred for his father begins to grow. He makes up his mind to do exactly the opposite of what his father wants from him.

Raani thinks that she is breaking the promise she made with Raj Mata by going to Ameerkot, but also feels that she has no other option other than this. The receptionist tells Devika that a private room has been allotted for the topper named Raani Gayatri.

Rajveer also announces that Gayatri is the topper, who has just joined this university. Gayatri visits her class where a political science teacher questions Gayatri about India’s independence. Gayatri says that though the country has attained its freedom but people still need to get free.

Raj gets upset seeing Gayatri laying such accusations on him and he decides to leave her in the jungle. Later, Raj reaches home and once again gets into an argument with his father. A Teacher walks up to Gayatri and tells her that she is on a scholarship and does not need to pay any money for the trip. Rajveer taunts Gayatri.

At the same time, Jeevan shows up in the scene and supports Gayatri. Hearing the terms and conditions, Gayatri decides to quit the competition. Rani feels bad when she sees Raj singing and dancing with the girls of the college. Raja turns angry at Gayatri.

Later, Bindu insults Gayatri calling her poor and a maid before everybody in the class. Just when an embarrassed Gayatri decides to leave the class, Raja comes to her rescue. Raja is standing with a board that has ‘Sorry’ written on it. He asks Gayatri to forgive him and adds on that he would stay here unitl she replies.

Gayatri runs out of Raj Mata’s ward as she sees Rajveer taking care of Raj Mata. Rajveer tells Gayatri that he was unaware that she was raised without her father. While checking the bags, the invigilator finds a number of chits in Gayatri’s bag.

Lavi accepts her mistake and tells Rajveer that it was she, who put chits in Gayatri’s bag. Rajveer asks one of his maids to close the window. The maid tells Rajveer that a girl is standing outside his house. Upon checking out as to who it is, Rajveer learns that it is Gayatri.

Badi Raani Maa finds Gayatri but fails to recognize her. Rajveer gets angry and calls Jeevan an illegitimate child. Jeevan too fumes up and picks up a fight with Rajveer. Seeing this, Badi Raani Maa feels happy.

Once There Was A King April Teasers 2022