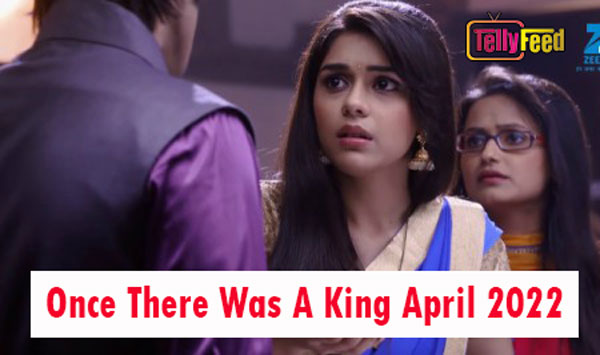 Once There Was A King April Teasers 2022

Gayatri tells Jeevan that she committed a mistake by falling in love with Raja. Read Zeeworld Once There Was A King April 2022 Teasers.

Zeeworld Once There Was A King April 2022 Teasers

Jeevan welcomes Gayatri to his house. A flashback reveals Gayatri meeting Kaal and discussing about Raj. Kaal tells Gayatri that it would be her responsibility to help Raj pass in the coming examination.

Raja gets angry on Gayatri and locks himself up in his room. Gayatri scolds Raja for not attending the viva and being childish. Just when Gayatri is looking for Raja, Jeevan shows up in the scene and wishes Gayatri on her birthday.

Gayatri reaches home and cries before Raj Mata. She tells Raj Mata that she was cheated in love. Raja tries touching Gayatri and the latter pushes Raja away from her.

Gayatri shows the incomplete tattoo that Raja engraved on her hand. Gayatri tells Jeevan that she committed a mistake by falling in love with Raja. Raja, who was passing by, hears this conversation between Gayatri and Jeevan. Raja devises a plan and meets his mother.

Raja’s mother is shocked to see the photographs and scolds him. Jeevan asks Gayatri to think about his decision.

Raja slips and falls and Gayatri stops and comes back to help him. Again, Raja gets furious and misbehaves with Gayatri.

Gayatri begins running for her life. Raja, who is falling asleep, sees Gayatri going along with Jeevan.

Raja’s mother tells him that though he is breathing, he lives only for Gayatri. Raja tells Gayatri that he is loving her.

Raja and Gayatri stay stuck in the library and she pleads with him for another chance but Raja refuses. When Gayatri reaches home, she finds Raja and Jeevan there.

Jeevan asks Raja to leave Ameerkot otherwise Gayatri would never be happy. Raj Mata is anxious thinking as to where Gayatri is. Meanwhile, Jeevan is crying holding the photograph of his mother and says that he has lost again.

Kaal grows angry and is about to slap Raja when he spots Raj Mata. Kaal gets angry and draws his rifle to shoot Raj Mata. At the same time, Kaal’s wife and Badi Raani Maa stop him from doing so.

Raja’s mother forgives Jeevan and seeing this, Raja is shocked. Raja and Gayatri’s marriage preparations have started and Raja’s mother asks the people to put Mahendi on Gayatri’s hand.

Gayatri and Raja find Raj Mata arguing with Kokila and asking her to give the necklace that she was wearing. Raja gifts a ring to Lavi. Raja decides not to marry Gayatri. Hearing this, Badi Raani Maa requests Raja to marry Gayatri and tells that doing so would return Gayatri’s property to her.

Gayatri surprises Raja. Lavi tells Badi Raani Maa that all their plans went vain as Raja and Gayatri have now married to each other. Jeevan confronts Raja and their talks lead to an argument. Badi Raani Maa tells Raja’s mother that a particular ritual needs to be conducted that day itself.

Badi Raani Maa has her plans in her sleeves and hopes to use it against Gayatri. Later, everyone realizes that Gayatri was drunk and it was Lavi, who served alcohol to Gayatri. Raja apologizes to Lavi and kisses her. Gayatri grows angry and slaps Raja.

Rani later leaves for her college and Raja feels bad that Rani is getting separated from him. Raja’s mother says that Gayatri should either forgive or punish Raja for his deeds.

Hearing Raja’s name, Gayatri gets angry. Meanwhile, Raja enters his classroom and has a conversation with Meeru before Gayatri and makes her feel jealous.

Just when Raja and Gayatri are about to hug, Lavi shows up in the scene and slaps Gayatri.

Raja tells Jeevan that Gayatri is his wife and if she wants to tell him something, she would find a way for it. Raja is shocked to see his father assaulting his mother.

Raj Mata is in the market when Kaal spots her and asks his men to kidnap her.

People begin questioning Kaal about his actions. Kaal promises his wife that he would start being a good husband from now on. Kaal also apologizes to Raja and tells him that he was just a king to him but now he wants to be a father. Kaal also tells Gayatri that he and his family have high hopes from her and would want her to participate in the elections.

Raj Mata, who is standing near Gayatri and Raja, overhears their conversation and recalls her past when Kaal murdered her family. Raja tells Gayatri that it is one of Kaal’s games where he is forcing Gayatri to stand in the elections.

Gayatri wakes up and finds Raja missing and becomes worried for him.

Raja’s mother also tells him to stay calm and allow Gayatri to make her own decision. Gayatri tries to leave the scene but Raj Mata stops her and tells her that Raja did not kill her parents.

Badi Raani Maa tells Gayatri that no Gayatri has crossed her path and she would not allow her to cross her path too. Lavi informs Gayatri that Raja slept with her and they have actually spent the night as a husband and wife.

Kaal insults Raja and claims that he would get all his missions accomplished even though he is in the prison. Raani Ambika gives her speech before the people claiming that times have changed where men and women have the same values in this age. Gayatri also speaks up and asks the people not to vote for her because she is Indravadhan and Raani Gayatri’s daughter.

Raja tells Lavi that she has no right to ask anything from Gayatri. Gayatri is left helpless as Raja has fallen unconscious and she cannot find help for him. Shortly, Gayatri spots a Baba and asks his help. The Baba asks Gayatri to take Raja to the mosque as soon as possible.

Raja hurries up to Lavi’s rescue and Gayatri too shows up in the scene. Gayatri is surprised to see her and Raja’s photographs on the wall. Raja then starts singing for Gayatri and impresses her. Raja tells Gayatri that he has planned a surprise for her on this Diwali and would want her to meet him the next day.

Read Next: Once There Was A King May 2022 Teasers