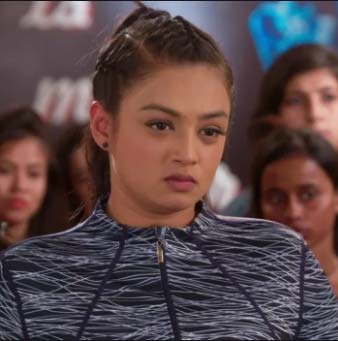 Arish says to suvetlana who is this baba? She says he is here for my treatment. Arish gives him money and says go from here. Suvetlana says he is helping me. He says mom this is wrong. He asks baba to leave.

Suvetlana sends her men to chandni chowk.
Sharma says stand up. Shaurya says I will stand on my own. Swati gives sharma lemonade. SAjita says drink it. He says no I don’t wanna drink it. Mahek holds him and they force him to drink it.

Shaurya says I dont want to drink it, coach made him drink it. Sajita asks Mahek to control herself. Mahek says this guy have made my life hell since childhood, he has been creating problems for me because he cant see women movin ahead, now he is acting like a lover, he even sent goons for me today. Shaurya says I didnt send those goons.

I irritated you because you were ignoring me, I kidnapped you because you arrested my father but I can never hurt you. Mahek says stop this drama. Shaurya says you have to listen to me today.
Svetlana says to baba that my hope is dying, first this kidney failure and now enemies coming from last birth, I should go back. Baba says nothing will happen frm that, you have provoked the past, now you cant run from it, you have done a big problem by bringing them closer, now beware of the danger on you, he leaves from there. Svetlana looks on.

Shaurya cups Mahek’s face, Mahek says leave me. Shaurya says you have to listen to me, I see you everywhere, I feel like I know you, I want to come closer to you thats why I show my irritation, Mahek says you have gone mad. Shaurya says yes I am mad for you, Mahek says I will kill you. Shaurya says fine kill me but dont make me go away from you because I love you, all are stunned. Svetlana’s goons have put recorder in Mahek’s house. Svetlana hears Shaurya’s confession and gets tensed. Shaurya says to Mahek that you feel the same for me right? he puts her hand on his heart and says you love me too.

Mahek looks at him with hurt in her eyes, she says what are you saying? Shaurya pulls her closer and is about to kiss her but coach pushes him away and says ill-mannered, he slaps him and asks him to go away. Shaurya says you both are Gods for Mahek, Mahek takes her decision with you both in respect, she lives for your happines, I should have asked you both first. He says to Sajita that I love your Mahek a lot and I want to marry her, I can live without her but I dont want to, he sits in Sajita’s feet and says please give me Mahek. Sajita says what are you saying? you are drunk. Shaurya says I got to guts in drunk state only, I got scared for Mahek today and thought to not hide the truth anymore, if anything happened to Mahek today then I wouldnt be able to live without her, I love her a lot, please understand, she is my life, please I cant live without her, give Mahak to me please, she knows that she loves me but she wont admit, I have seen love in her eyes for me, I love you Mahek, I really do..

he falls down and goes to sleep. Mahek says he is lying. Coach says he is not in state to leave, dont think about him, go to sleep, let him be.At night, Mahek is lying in bed and recalls Shaurya saying that he loves her. She sits up. Swati wakes up and says what if he is saying truth? Mahek says I dont want to talk about it, she goes to sleep.

Sajita is awake in her bed, she gets up and thinks that I didnt trust Shaurya a bit but today I saw truth in his eyes, I saw Mahek calm down for a man for first time, what if Mahek have started liking that guy?

Shaurya is sleeping in porch. Mahek sees his getting cold from her window. She brings sheet for him and tucks him, Shaurya holds her hand in sleep and murmurs I love you Mahek, trully, please dont leave me. Mahek looks at him and cant look away. Sajita comes there and sees this.

In morning, Shaurya wakes up and look at his watch. He sees water on table. He falls from couch and looks around, he thinks that this is a big mess. He gets tensed and thinks what happened last night? he recalls coming to Mahek’s house, making a chaos, Mahek threatening him and Shaurya confessing his love. He thinks that I made a fool of myself infront of my enemy, I cant even drink water, she might have mixed poison in it. Sajita comes there and gives him tea. Shaurya takes it. She asks him to sit down. Shaurya does and smiles at her.

She asks him to drink the tea. He nods and drinks it. He says tea is good, she says I know, this is ginger and tulsi tea, its good for you. She asks if he remembers what happened last night? Shaurya gets tensed. Sajita asks what was the meaning behind what you did last night? Shaurya looks away. Sajita says I am asking something. Shaurya says I.. Coach comes there and says dont ask him anything, he and his father wants to play with our emotions. Shaurya thinks to control himself. Sajita says I want to ask him something. Sajita asks Shaurya if what he said last night is true? does he really love Mahek? and Mahek loves you too? Shaurya looks on.

Arish says to Suvetlana kidney donor is arranged. she hugs him and says I am lucky. He says I am lucky mom. Sweeti calls Arish. Yuvraj says to arish you and your mom have to come to our function. Suvetlana says I will go.

him if you don’t care for him? Why you care for him? Mahek says for humanity. I dont’ like him at all. Sajita says I saw in your eyes what I saw in his. Swati says ask your house.
Yuvraj asks Rashmi where is shaurya? She says here he is. Yuvraj says I have arranged a party for you. Mahek recalls her moments with shaurya. Mahek says this all is stupid for me.
Shaurya sits down. He recalls Mahek. Rashmi says to shaurya where did you go? He says party. She says lying? He says no. Ma please get me tea.
Rashmi says t shauyra I am looking for a girl for you. Shaurya says I dont’ wanna get married. Rashmi says see these pictures. He says I dont’ wanna see them. Rashmi says you like mahek? You love her right? He says there is no such thing. Rashmi says she also loves you. Who knows what happened with your daddy. Shaurya says she wont agree. He tells her everything.

Swati says to sajita you think this is right ma? Sajita says yes distract mahek. I will go to shauyra’s house and talk to him.
Mahek and Swati come out to eat chaat. Mahek says I am eating this after so long. Coach sir dont’ let me eat anything tasty. Swati says that’s why I brought you here.. mahek says remember when we came here first? She recalls how shaurya hit sajita.
Swati says lets go and eat paratha.
Shaurya knocks on Mahek’s door with rashmi. No one opens. Shaura calls Swati. Mahek takes it. she asys what do you want? He says i am outside your house. Mahek says what re you doin outside my house? Swati says mom went to shaurya’s house. Mahek says what did you say?

Yuvraj welcomes Suvetlana. Yuvraj says where has that Shaurya gone. Yuvraj sees Sajita. He says why are you here? She says I want to talk to Shaurya. Yuvraj says don’t waste time. My son wont meet you. sajita says for kids we have to forget all this.