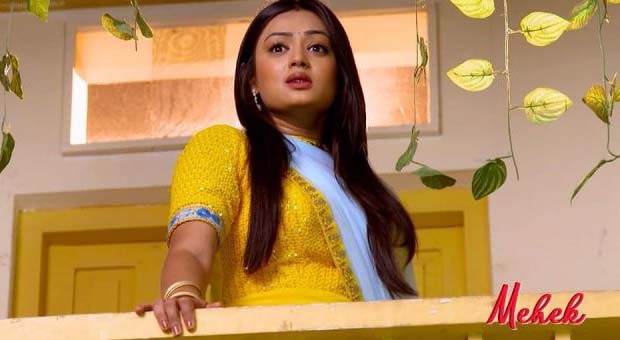 Next morning, Suvetlana says nothing is working. Watchman comes to her and says Shaurya has called you in. She comes in and says thank you. Shaurya says you all this she has changed. She is even blind now? Please sit here. She sits down. Shaurya says come in. He says he is an eye specialist. He will check her and we will know how blind is she. Doctor checks her. Shaurya says if your eyes are fine you will go to jail forever. They test her eyes. She says I want my grandkids to be in my lap. Shaurya says get your tests done first. Doctor says she is blind. Everyone is dazed. Suvetlan says God has punished me enough already. I will go from here and I will die soon. Vicky please do my funeral at least. Mahek says please vikcy don’t do all this. Suvetlana is leaving. Vicky hugs her.

Shaurya says enough. You guys get fooled everytime. Mahek says lets give her once chance. People change for each other. He says peopel like her can never change. SHe says for one week if we don’t see a change in her we can ask her to leave. He says exactly after a week we will kick her out.
Nehal gives the babies to Suvetlana. She says I can’t even seee them. The kids cry. Shaurya comes in. He says kids are wise. They cried coming near her. Shaurya’s guards come in. He says they will stay here till she is. You brought her in so I got these guards in.

Nehal says to Mahek this is all so embarrassing for Vicky. Mahek says Shaurya doesn’t listen.
Dolly saysv what are these guards for? Karuna says we have to be careful.
Suvetlana comes to her room and says on call I will ruin this family. I am in here again. the game will start now.

Shaurya is agitated. He comes out adn says to the guard is there any movement? He says no she didn’t come out of her room.

on the floor. suvetlana steps on it. Vicky says can you be done with all this?
Mahek says Anjali’s body is being released. Karuna stands up in tears. Suvetlana says I am sorry. She says maybe that was her fate. Everyone goes ot her funeral. Karuna is really upset.
Suvetlana comes out of the room. Shaurya says in heart that car cleaning guy looked weird.
Suvetlana mixes something in tea of body guards. all of them faint. Vicky comes downstairs. He says Nehal.. Suvetlana comes with NEhal. She has gun on her head. She says I am not blind. Vicky says mom what is this. Shaurya says brakes are fail. He is scared.

Suvetlana says keep the kids here. Nehal says please don’t harm my kids. Suvetlana says decide who will die first? You all will die together. Shaurya tries to put brakes but he can’t stop the car. Everyojne is scared. The car hits a wall.
Suvetlana says to Vicky you are a loser. I hve to kill you. She puts gun on him and Nehal. She puts in on the kids. Nehal says I beg you don’t harm my kids. They are your blood too. Karuna says you all have to go up.
Harsh comes home. He sees the guards fainted everywhere. He sees whats going on in the house. Suvetlana’s men come and take him in too.

She says these are so pretty lets send them up. Nehal says please don’t do anything. Suvetlana says you all have ruined my life. Vicky tries to snatch the gun from her. Suvetlana shoots nehal. She screams and falls down. shaurya’s head is bleeding. Mahek’s head bleeds too. She says I am fine. Shaury says we have to rush back home. He calls home but no one picks. shaurya says this wasn’t an accident. Suvetlana did all this. I asked you not to do all this Mahek but you never listen.

The bullet hits Nehal’s hand. She screams. Suvetlana says if you love her let her die don’t try to save her. shaurya tries to get the rickshaw. Dolly says I hope Nehal and kids are safe.

Nehal request to swetlana…Harish threaten her saying kids haven’t harmed you and you have rivalry with me and Shaurya so let go this kids ..Vicky and Nehal..they are your family… Vicky also request and swetlana tells Vicky that he is remembering now that she is his mother…he has supported Shaurya and send her to jail..and pushes him… Shaurya gets a lift and they all sit in the car …Vicky stand back and tells he has supported Shaurya and he will always support him because he was right…and Bhabhi has gone against his wish and brought you inside but you aren’t worth of trusting…and you can’t be my mother.. Vicky shouts at her… swetlana picks his baby and tells your dad blood is boiling and now she has to kill someone…she

holds gun on baby head and everyone ask not to shoot… suddenly someone throws smoke bombs and whole Sharma family comes inside and attack them… swetlana runs out of house..she threatens a car driver on the road and sits a drive away.. Shaurya reaches along with family.. he tried to follow her but Karuna stops him..mahek says she will follow her..she takes a bike of a girl and follow her … inside KM Shaurya beats swetlana goons..mahek hits swetlana and bringw her back to KM ..police comes and arrest them…Mahek slaps swetlana before she leaves saying this is the last time you have hurted our family…
Kanta hugs mahek.. they all go inside…Vicky says sorry to Shaurya and ask to forgive him…Nehal also tells sorry saying she would have lost her kids …mahek says it was her mistake to bring swetlana back… Shaurya ask them to stop saying sorry as mistake happens with everyone..and says he needs a prize as he was right about swetlana..he ask chachi to make tea for them…later Karuna ask kanta when did she came back…kanta says she was worried about them and came back and tried calling Everyone but phone was not reachable…than they came here and once they reached here they understood the scene …and Ravi had some Diwali crackers in his car and they used that and some how managed to save them..

Swetlana has already bribed the inspector and he sets her free on the way … later she meets her men and plan to attack khannas … Shaurya plans to go out with family..but maasi tells they will go to Mandir first…

Mehek gets ready shaurya came from behind silently and hugged her. She asks why you always do something new.. He says I’m feeling not good. She says did you get any fever she tries to find thermometer.. He watches her.. Okay you don’t go anywhere we will cancel the program. She s
Again says I will do one thing I will call kantha chachi she is expert in handling fevers. He says now why to disturb chachi we will handle.. She asks now fever uthar gayi Kya.. He says whT to do if you are not coming to me I only have to come a
To you.. new baby is coming so have to take care big baby also .. He pulls her on him.. She tries to go away but he pulls again..