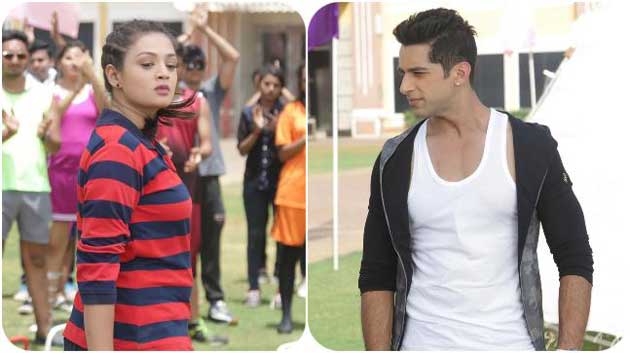 Shaurya says mahek please listen. It starts raining. Shaurya dances with her on agar tum kaho. Suvetlana sees them. She tries to shoot them.

Its raining heavily, Shaurya pulls Mahek inside a tunnel. He says riots are happening around. Shaurya gets hurt by tunnel, she says I will search something for your wound. Shaurya smiles at her and says relax, medicine wont work. Shaurya tries to pull her closer. She tries to wipe his wound but he keeps leaning in, she says anyone can see, Shaurya says let me take remedy for my wound, he leans into her and is about to kiss her but

some horn honks. Mahek pulls away and says we should go. Shaurya hugs her and kisses her cheek, he says this medicine is enough for now. They leave from there.
Aarosh have headache and says that girl is mental case, I ave hangover and now this. He hears doorbell.

Servant opens door to see Sweeti there. Sweeti says I have been calling you, please take me with you, I want to marry you, I wont back in this house. He asks her to calm down. Sweeti says I want to live with you, I dont care if my father disown me. Aarosh thinks that if she cut ties with her father then that would be problem for me. Sweeti says lets go to mandir and marry.

Shaurya and Mahek stop a truck driver to take lift but driver says that I cant go ahead, its all river there, rain brought flood, you both should stay the night in hut. He leaves. Shaurya pulls Mahek closer and says this is a good idea, we will spend night together. Mahek says I am worried about reaching home and you are thinking about cheap romance.

Sweeti and Aarosh are in car, Sweeti says we have to take this step, we will marry in mandir, Aarosh says you should be like a bride, I will bring bride dress for you, she says its not needed, he says I will come, he stops car and leaves.

Mahek is trying to call her mother. Shaurya says dont worry, they must have figured that we are together and safe. Mahek says I want to go home. Shaurya says even God wants to spend the night thats why we are not going back. Mahek says to tell you the truth.. she goes near him and screams. She runs away, he runs behind her and grabs her. He says surrender to me, Mahek laughs, janam janam plays as they share eyelock. Shaurya leans in, Maek closes her eyes anticipating kiss but they see truck coming. Mahek stops it. Driver comes out and says we are going to Delhi, you want to go? Mahek says okay we will go with you.

Shaurya thinks why he is eager to take us? Shaurya says there is mud on the way then why you want to go? Driver says I will earn money. Shaurya says to Mahek that we should stay here. Driver says dont worry, its my daily work, we go from muddy areas. Shaurya says I dont feel right, Mahek says you stay here, I am going. Shaurya says fine I am coming. They both sit in back of truck. Driver messages Svetlana that he found them both, I am bringing them to you. Svetlana smirks.

Driver says to Shaurya and Mahek that dont worry, I will send you to your location. Shaurya keeps pulling Mahek closer. Mahek asks driver from where he lives? he says I am from Rajistan and now live in Delhi. Shaurya asks driver to put a song on, driver says okay. He starts dichkayon. Shaurya dances with Mahek. Mahek pushes him away playfully. Shaurya falls down, he asks driver to drive carefully. Suddenly car stops, Drvier says give me time, car stopped. He calls Svetlana and says they are with me, I can kill them, Svetlana says no I am coming.

Suvetlana’s thug calls her and says they are gone somewhere. She says idiot look for them.
Mahek says why are we running? He tells her what the thug said on call. He says we have to hide. They must be looking for us.
Suvetlana says I lost them again. Mahek and shaurya run in the jungle. SHe says why they wanna kill us? He says I don’t know. Mahek falls down. Shaurya picks her. Thugs come. They both hide.A thug fires in the air. Shaurya says lets run. Shaurya’s leg gets injured. Mahek picks him and helps him walk. They hide under the rock. Thugs walk past them. Mahek says what will we do?
Shaurya’s leg hugs. Mahek says stay here. She ties a cloth on his wound.

Yuvraj goes out to look for sweeti. Arush and sweeti are in temple. Yuvraj’s guard texts Arush I am bribing him there.
Suvetlana asks her thugs to look for shaurya and mahek. Sajita is worried for Mahek. There is heavy rain outside.

Mahek says to Shaurya we have to go to hospital. Can’t stay here. He tries to stand but he can’t Mahek says please get up we have to go. He says you go and get out of here. Get some help by morning. Mahek says I am not leaving you alone. She says give me your knife. Mahek says I know how to get the bullet out. She takes his bullet out from the knife. Shaurya screams. Thugs hear. They find them.

Pandit says get up for pheray. Yuvraj comes and sys if you step ahead I will kill you.
Mahek asys what if they heard? He says dont run. We have to hide here.

Yuvraj says to sweeti so wanna marry him? I can burn you both. Sweeit says please leave us alone. I wanna marry him. He says this wont happen in my life. He pulls sweeti. Arish says please let us marry. Yuvraj takes out his gun and says who wants to die first? Sweeti says don’t harm him, I will do what you ask me. Yuvraj says sit in the car. He takes her. Arus says uncle took his girl. He smirks.

Mahek and SHaurya are in jungle. They fight thugs. Police comes. Mahek sees the woman with hidden face trying to shoot them.