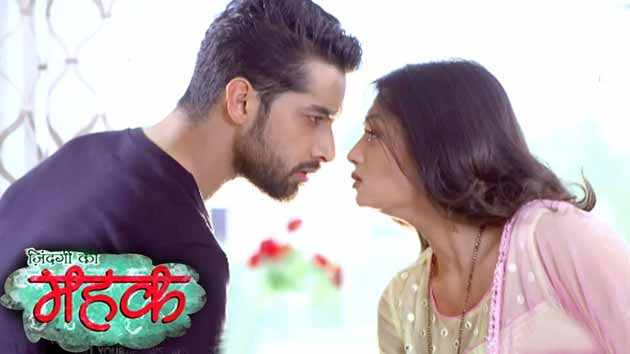 Mahek beats goon but Aarish injects her from behind, Mahek gets unconscious. His goons start taking her from there, one rickshaw driver sees it.

Swati says to coach that Mahek has been missing and I am sure, Shaurya is behind it. Coach says I wont let him do anything, I will go. Swati asks him to rest, she says I will find Mahek at any cost.

Goons lock Mahek in a room, they offer her food but she doesnt take it. They leave. Mahek says I didnt know Shaurya would do this but if this is Shaurya’s goons then why Shaurya is not coming here? Shaurya was following me but who are these people? Mahek screams.
Aarish is outside Mahek’s room. Svetlana comes there. Aarish says I told you I wont do any mistake, Svetlana says I get angry on you so you perform well. She brings

some doctors. Doctors go to Mahek.
Shaurya is asking about Mahek to people. Rickshaw driver sees Mahek’s photo in his mobile. Shaurya asks if he saw her? he says no. Shaurya grabs him and asks him to tell. Driver tells him how he saw the girl being kidnapped. He leaves. Dadi calls Shaurya and says you have to save your dad, Shaurya says I am worried about Mahek, I want to free father but not by hurting Mahek. Dadi says send me her photo. He nods and ends call. He says why I am thinking about her? she can die all she wants. He sees her pony in his car, he says why my heart is melting? I have to find her. Dadi gets Mahek’s photo.

Sajita asks nurse how is coach? Nurse says he is better but dont give him tension. Sajita says where to find Mahek? Swati says I am going to find her.
Dadi comes to coach’s room and says I heard that you are ill so I thought to give a visit. Coach tries to sit up but Dadi says sign on these papers and Mahek will be freed and if you dont sign it then you know what will happen. Coach says you kidnapped her? how can you. Dadi says if you lose time then Mahek wont be saved. She shows him Mahek’s photo of being tied in a cage. Coach signs on papers, Dadi thinks my work is done, I dont care where Mahek is.

Svetlana’s doctors tie Mahek to an operation table. Mahek tries to scream but they inject her, she faints.
Shaurya is finding Mahek. He sees her chain on road.
Svetlana says to Aarish that take her kidney and kill her, Aarish says nobody would be able to save her, I will kill her, nobody will be able to find Mahek. Svetlana is shocked and says what name? he says Mahek. Svetlana comes in operation room and is shocked to see her, she says this is Mahek? she thinks its not possible, Mahek died infront of me. Svetlana gets jittery and faints. Aarish says to doctors that we have to do operation fast.

Doctor checks Svetlana. Doctor asks to show her medicines.
Shaurya comes to the house where Mahek is kidnapped. He comes to her room and sees her lying on table. Aarish is passing by there so Shaurya hides and doesnt see his face. Aarish leaves from there. Shaurya comes to Mahek’s room, he tries to wake her.

Shaurya takes Mahek from there and hides her. Mahek is unconscious and holds his hand. Shaurya recalls their happy moments together, he hugs her and caresses her face. Jo mere dil ko plays. Shaurya lifts her and takes her from there.

Doctor checks Svetlana. Svetlana wakes up. Aarish asks if she is fine? She leaves from there. She comes to Mahek’s room and says where is she? she asks Aarish to find her. Aarish says we will find her.

Shaurya runs with Mahek in his car. Dadi calls him. He comes out and says dadi some thugs took Mahek. Some drives the car and runs. Shhaurya says dadi she took the car again.
Suvetlana says arish find about that girl. He says what happened mom? She is with sweeti’s brother in a college. His name is shaurya. She is from a small village. I know her whole family. He says mom please dont take stress. i know her whole family. She says i am going from here. I don’t need to see that girl again.

mahek comes out of the car. She steps in the house. Sajita sees her. She is dazed. Mahek is dizzy. They take her in. inspector says we have to take her statement. Sajita says she is not well. i will call you when she is well.
Yuvraj comes home. Rashmi does his arti. Shaurya comes.

Yuvraj says I knew you wont let anything happen. Dadi says sit. He says sweeti don’t worry we will get you engaged to arish soon. You think i don’t care for you. But i do. Rashmi make everything of her choice. He kisses her forehead.

Mahek wakes up. she says thank God you are fine sir. Coach says everything is fine. Mahek says call police. I wanna tell them shaurya kidnapped me and took them there. Coach says we should take our FIR back. Coach says you wont have been back if I didn’t sign papers for yuvraj’s release. They can stoop lower. I don’t wanna mess with them, Mahek says i can’t sit quite. Sajita says we will stay quite. Mahke says i wont be scared. Swati says she is right. Sajita says what if they attack me or swati? Will you be able to forgive yourself? Forget it and move on. They re very dangerous.
Dadi says to Shaurya dont’ worry. We scared her enough. SHe wont do anything.
Coach says we ill go back to village.

Mahek says i wont give up like this. Sajita says yes we have to do something in one week. Mahek sys everyone will know bad of a human he is.

Arish and suvetlana are on their way. Suvetlana says where are we going? He says sweeti’s place. She says I knew someone who lived on the same road.

Yuvraj says rashmi prepare for everything. We will get sweeti engaged today. Yuvraj says to dadi arish and his mom will sponsor shaurya.
Suvetlana comes to the same house. She is dazed. She steps in. Dadi says we were planning to do engagement as well. Rashmi says lets do arti till sweeti’s brother comes too.
Shaurya comes in. Arish says here is my brother in law, Shaurya. Suvetlana sees him ad she is shocked.

Suvetlana is scared. She says this can’t be shaurya. I killed him with my own eyes. Arish says mom are you okay? She asys yes. She says to yuvraj is that your son? Yuvraj says yes. She says nice to meet you. I should go home. i am not feeling well. Can we do engagement some other day?
Yuvraj says sure no worries. Sweeti says my engagement got postponed. rashmi says its okay.
Mahek comes to that place with swati. She says we have to look for proof. Swati says they will need a strong proof. Maek says we will find something.