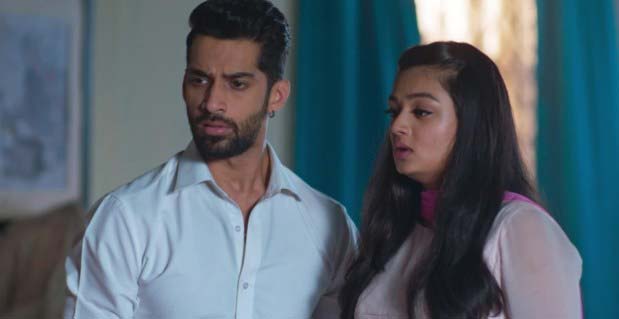 Everyone plays with Vicky’s kids. Nehal says they cry so much. Mahek says see how I make them happy. Mahek sings them lullaby and they sleep.

In jail a prisoner gives Anajli cigarette. She says eat food. I want you to recover.
The pooja starts. Nehal picks the chunri. She trips and it falls in fire. Pandit ji says this is not right. Something bad is coming.
The girl says you have to run from here and take your revenge. Pandit says the lifespan of these kids is not long. SHaurya says are you crazy. Pandit ji says with these kids a dark force has entered in this house.
Anjali says who are you? She says enemy of enemy is friend. And we are blood too. SHaurya says get out of here. You fool people like this. Mahek says stop it. Karuna says he will well known. Why did he warn us like this.
Kanta asks pandit ji what happened? He says I saw a bad future. There is a pooja. We have to go for it to Banaras. Mahek recalls what pandit ji said.

Shaurya says why are you so worried? You have to be strong. No one is in trouble.
Anjali says who are you? You know those people? The woman laughs. She says I am your aunt. They treated me unfair like they did to you but now time is up. She tells them everything. Its Suvetlana. She says they ruined my life and my son hated me too. She says their game is over. She tells her everything.
She tells Anajli her plan. She says this evening we will run away from here. You wanna take revenge right? She says yes.

Shaurya says we are leaving this house. You all don’t wanna live happy. Don’t be scared of this.

Shaurya says stop all this then.. Mahek says I felt something. Karuna says the baby must be walking. shaurya says you all eat tension. Karuna says we will do the baby shower. They all prepare for it.
Suvetlana says to her constable I know my family is mad at me. Thank you. She goes back in the jail.
Kanta says to Karuna i have to go to Banaras for pooja. Dolly says yes you should go there. Shaurya says what are you all talking about? Karuna says she was going for banaras for pooja. Mahek says will you come back? She says yes.

free. she says Kanta was lying but they are doing this for our family. Let us not interfere in their faith. shaurya says these pandits fool us. She says let them buy peace of mind. He says okay.
Doctor dresses Anjali and Suvetlana’s wound. Suvetlana gives anjali an injection. at night, constable comes in. Anjali gives them fainting pills. They both faint. Anjali and Suvetlana run from there.
Mahek’s touches glass in sleep. It cuts her finger. Shaurya wakes up and says why don’t you take care of yourself. Shaurya gets a call from hospital. He is dazed. Shaurya tells Mahek Suvetlana and ANjali were in same jail. They both ran.

Shaurya says to inspector how did she run? How could you not keep your security tight. she says they gave fainting injections to our staff. Here is how they ran. We have our people everywhere.
Anjal ran from the jail. Cop saw her and said don’t move or we will shoot. She tried to run. They shot her. Inspector says we gave her a warning but she ran. So we had to shoot her.

They bring Shaurya and Mahek to her dead body. Mahek and Shaurya are shocked and in tears. She says you will get body in three days. Mahek says how will we tell ma? he says we wont tell her today. Inspector says I am sorry for your loss.
Suvetlana is in jail. Inspector says to her you might get bailed out for helping us in catching Anjali. She says thank you.

Mahek and Shaurya tell Dolly. She says that’s so sad.

Inspector says to Suvetlana that you helped us in catching Anajli. We grant you bail. She says thank you.
Karuna and Dolly do pooja with kids. Shaurya says everyone looks so happy. He comes to see arrangements. Vicky says I am handling everything here.
Mahek gets readyy. Shaurya comes and gifts her earrings. She wears them. He kisses her.

A watch falls on Mahek’s hand. It bleeds. Shaurya says I dont’ want to bring her home. Her presence can harm us. I don’t want her inn this house. Mahek says please. He says i dont’ want to talk about it. Kanta and whole family leave.

Mahek sees Suvetlana blind sitting in front of their house. she goes to her. Mahek says you here.. She says i will stay here till you accept me. I want one chance mahek. I thought I would miss money but I only missed you all. Give me some time with Karuna. SHaurya sees Mahek with her. Suvetlana touches her feet and says please forgive me. Sutlena says mahek stop.. She leaves.

Shaurya calls inspector. She says we bailed her owning to her good behavior.
Nehal says to Vicky she is your mom. She can’t stay on road. Whatever she did was wrong.
Mahek says Shaurya please look at her. He says I don’t care about her.
Vicky says she doesn’t care about family. She never loved me.

Jeevan calls Kanta. She tells him about all the preps of pooja. He says you wouldn’t believe what happened today. Kanta says this all is not right.
At night, Mahek sneaks out with blanket. Nehal joins her and they come to Suvetlana. SHe says please take me home. Mahek and Nehal leave.