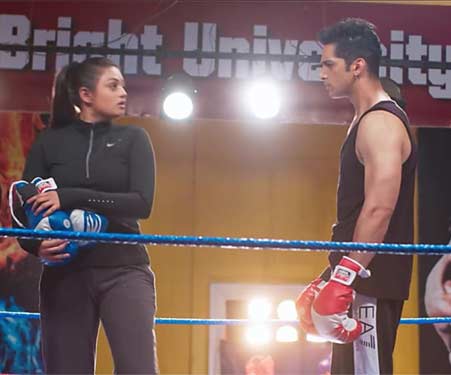 Mahek collides with Shaurya. He holds her. He comes back with Mahek home. Coach says what are you doing here? He says I came here to give this protein for Mahek. Mahek throws it.
Shaurya says I just want one chance to clear myself. Mahek says go from here. We don’t need your clarifications. They leave.
Mahek comes back home. Coach says I thought you were convinced by his drama. He is showing off his money. We don’t need his protein powder. Mahek says he can’t win from front so he wants to stab me from back. Swati says his intentions looked good. you should give him one chance.
Shaurya is in street. he hears someone saying work is done. Holika will burn. Shaurya stops him and says what holika?
Mahek says didi you are very innocent. She tells them everything. They hear people saying call police.

Dadi says to Yuvraj calm down. You have sent people. They will do the work. Rashmi calls yuvraj he says I am very angry. I will talk to you later. Dadi says she is your wife. Talk to her. Maybe it was something important. He says most important thing is this model. This rashmi was calling because sweeti wants to do a job. She should rather get married.

Shaurya hits the thug. Mahek sees flashbacks of her past. She beats the thugs. The thug throws something on shauyra’s hand. His hand burns. Shaurya beats him/ The thug burns the door. Sajita screams they are burning my house. The door burns. Sajita says please help. They put kerosene here. Mahek throws water on the door.

Yuvraj beats his thugs. He says you are so useless. The thug saays that girl and that boy hit us so much we had to run from there. This was the guy do you know him? He points at Shaurya’s picture. Yuvraj is dazed. Dadi says he is my grandson. He roams around Mahek’s house? Yuvraj breaks the frame in anger.

Swati says mahek dress his wound I will see me. Mahek says I? Swati says yes? Can you only hit not heal? lets go ma. She leaves.
Mahek dress Shaurya’s wound. She says sorry.. He says its okay. The song moh mog k dhagay please in background. He says I will manage. Mahek says you can’t. She takes it from him and cleans the wound on his neck. She says does it hurt? He says no I am fine.

Shaurya says did you send thugs to mahek’s house. Dadi says are you crazy. Shaurya says why is he silent? Yuvraj says how dare you shout in front of your dad. Shaurya says I am asking you something. He holds Mahek’s hand and says whatever you attack on mahek is attack on me. I am her shelter. If you harm her you harm me.
I wont let you go to her. Yuvraj says for this girl you will shout in front of me. Shauyra says you can kill

but I wont let you touch her. Yuvraj shoves him out of the house and says get out.

Mahek leaves with coach. Mahek comes home. Sajita says are you okay? We should do something. Mahek says he cant fool me with his father. Mahek says why is he doing this drama? Swwati says he is doing it sincerely. I don’t think his intentions are bad. Mahek tells Swati how she fooled shaurya. Swati says your intentions were wrong not his. You should apologize him. Mahek says I can’t trust him. Something bad will happen if we become friends. ]

Next morning, principal calls coach. Mahek goes to canteen and eats. He gives her diet food. Mahek says this isn’t for me. He says Shaurya sent this for you. He opened his new section in the canteen. This is free for everyone. Shaurya cooks. everyone congratulates him. Mahek says did I ask for it?> He says champ should eat it. You wont get unhealthy food. so this is all you have. Mahek steals samossa and tries to eat it. Shaurya says I will tell coach. She stops. He says you have to eat this healthy food. Maahek eats it and says its tasty.

Yuvraj comes in and breaks Shaurya’s section. Shaurya says daddy listen.. Yuvraj beats him with a hockey. Students stop Shaurya. he says I am seeing this day because of being nice to him. Yuvraj leaves. Everyone says what an idiot man is he. Shaurya was only working hard.
Mahek looks for Shaurya. He is sitting alone. Mahek comes to him and says you are injured. Lets go to medical room. Your dady shouldn’t have done this. This all happened because of my lie. He says my daddy is like that. Mahek says thats so wrong. He says he can never change. Anyways, thank you. Coach comes and says what is happening here? Mahek come to boxing ring? She leaves.
Shaurya comes home. Yuvraj is about to slap him. He hugs him. He says sorry you are hurt. I shouldn’t have hit you. Shaurya says because of you i have seen concern on Mahe’s face for me for the first time. She will fall in my trap and then I will make her lose. Sorry mahek. They both laugh.

Mahek says to Sajita i only asked shauyra how he is. His father hit him. Coach saw it and is making fuss out of nothing.
Dadi makes shaurya eat. Yuvraj says you have to eat to heal these wounds. shaurya says my wounds will heal when Mahek loses.
Coach says he is playing with you. He is fooling you. He wants to take your family from you and make you alone. He wants to be your friend so you can not focus on him. Mahek says don’t argue with him. Coach leaves. Sajita says are you crazy. Have you forgotten his favors on us? And brought us here. How can you be so rude to him. Mahek says he is like a God to me as well but I can’t listen everything. Sajita says we have this house and food because of him. He never cared for himself. If he didn’t save us your father would have married you to an old man.