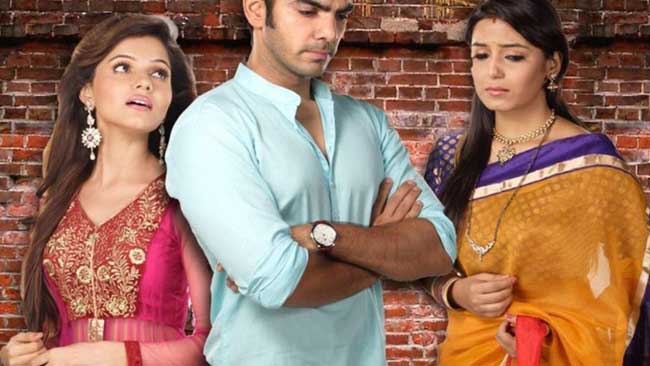 Sohan comes and starts taunting Raj, for working on himself too, just like he’s working on the fan. He says that he needs a woman in his life. raj shows his anger by breaking the fan. as raj is about to go, sohan stops him saying that he’s the father, and talking from experience, he should atleast listen to what he has to say to his son,

He asks Raj not to cry over love, as its not becoming of a man, as he can attain that in a second, and asks to take an example from him, who has more age yet two woman, one for the household, one for his pleasure, and has the best of both worlds. He asks Raj, if he is impotant. Sohan asks raj to just name the woman who he would want to ignite his manhood, and he would have her in his feet anytime. he says that he just needs the proof of Raj’s manhood. raj breaks the fan and gets very angry. Sarita hears this and is tensed.

Hearing the doorbell ring, Raj opens the door to find Divya waiting outside, and is very shocked. Sohan sees this and is surprised that choti bahu is in their house, and goes to call sundari, the younger wife or rather the mistress, as she woulod be very happy. sarita also rushes upto him. raj thinks that he knew that she would come to Raj, and his wait wont be in vain, that why she came to him, leaving her marriage. they both enter into a romantic eyelock. he caresses her cheeks, while she is teary eyed. they are interrupted, when sohan comes in barging along with his family. Sohan’s wife exclaims that she came again. The younger daughter and the fatso tell him that she had come here also. raj is surprised and asks her if she came earlier too to meet him, and asks that she has come to meet him again. Raj says that he thought what not, seeing her getting married, but actually she came for him. But before he can complete, Divya crosses him and says that he isnt here as Divya Malhotra, but to greet this family as Choti Bahu, as the bahu of this house has won the contest, and has gotten a chance to spend some time with her, and calls in her camera crew. Raj is surprised while his family is happy out of their wits. shiela comes in asking which contest is she talkinga bout, and they dont know about any such contests. Divya saya that there was one such contest. Before she can complete, Raj holds her back and asks why has she come here. Divya again ignores him, and says that Sarita had given the best slogan on marital relationship. She tells the poetry that supposedly Sarita had given her. Granny compliments sarita for this, and asks sohan’s wife to respect sarita more, as the world is now doing. Sohan butts in, saying that he is the head of the family. He, along with the family welcome Divya into the house. Divya says that she just came for the announcement of the results, and the contest starts tomorrow. She informs them that she would stay with them for the next one month, hearing which they are very happy. After divya leaves with her camera crew, raj is highly confused and surprised, that she came here for the contest. sarita wonders if raj got to know that sarita got her to come, then there would a big problem, and hopes that raj doesnt know this.

In her room, Shiela asks why is sarita doing all this, in her room. sarita is in denial. Sarita tries to make her see why is she right in calling divya to their home. Shiela reminds her that she shouldnt do the same mistake that her mother did. sarita says that when she had called, she didnt hink so much. shiela asks him to see what is raj facing, and that this story would only rekindle the past, that would destroy her future with raj, due to divya’s past with him. Sarita tries to tell her that Divya is engaged. Shiela tries to tell her that for TV personalities, changing partners is like changing clothes, and they dont give much importance to relationships. Sarita tries to tell her that not all people are alike, and some are good and some bad. She says that she doesnt want to discuss this anymore. Shiela asks her not to repeat the mistake that her mother did, and not let another sundari come in this house. Shiela leaves, but sarita is tensed.

Divya tries to explain her reason for this drama, to gaurav. Guarav says that he isnt bothered what the world would say, but about her and what would she do, when the family and particularly raj finds out that there’s no such contest, as it would come out eventually. Divya says that she isnt bothered about that. He says that the media would splash this news. she says that she would stay away from the media. She apologizes for this irrational anger, and that he is just to be angry at her. He says that he’s just concerned for her. He asks what if raj cant control his heart. divya asks him not to worry as she has more faith on him, than even herself. Realising her msitake, she faces an awkward pause with Gaurav, while they both look away from each other.

Raj remembers what happened, and Divya’s statements. Sohan happily asks raj why didnt he tell that they were in the same college. He says that he would welcome her grandly in the house, and goes to make preparations. Raj is determined that he wont sit in peace till he finds out what is divya upto and her purpose of coming in this house, as she might lie to others, but not her, as he knows that Divya has come for him only.

The daughters are gushing about Choti Bahu’s arrival in the house. shiela comes in and reminds them to finish the work that Sohan had given, or else he would be angry. After they leave, shiela asks sarita what drama this is. sarita says that she wont let Divya sleep on the old mattress, as she’s used to be comfortable and luxurious lifestyle, hence is spreading out the mattress that her father had given her, on her wedding. She says that for the first time, she is seeing a foolish woman, who is laying out the bed for her husband’s lover. Sarita reprimands her for talking like this and asks her not to forget that she’s older to her in age and relation too, and she shouldnt talk like this with her. Shiela asks her not to repeat the same mistake that her mother had committed. She asks that today she is giving divya her bed, then tomorrow when she asks her husband, would she give that away too. Sarita slaps her, at this and she is hurt. As shiela leaves.