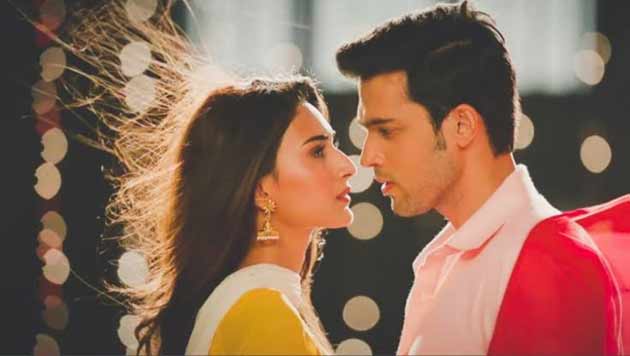 Made For Each Other Sunday Update 3 November 2019

Anurag getting conscious at his house. Mishka tells everyone that he got conscious. Veena asks him did he know about kidnappers. Mohini says see his state, this is not imp now. Anurag says no, who got me here. Shivani says I have got you here. Mohini says promise me, you won’t put life in risk. He says Prerna is in trouble, she needs me. Mohini and Nivedita stop him. Mohini says I promise Prerna will be home safely, you have to promise me, you won’t go out without telling me. He says fine. She says I will keep my promise, Prerna will be back at her house safely. She asks doctor to give sleep medicine to Anurag so that he can sleep well. Prerna asks goons to leave her. They tie her. She gets shocked hearing Navin’s laugh. Navin comes to her and opens her blindfold.

She shouts.
He says you are mine, I wanted to meet you, I didn’t want to do this, I had to do Anurag’s accident, I hope he dies this time. She slaps him and tries to run. The goons catch her. Navin says so you love Anurag. She says if anything happens to Anurag, you will know my love for him and what I can do for him. Mohini asks Moloy to get Prerna safely home.

Moloy says yes, we are going to meet ACP now, thanks for concern for Prerna, I m glad. Moloy and Rajesh leave. Veena thanks Mohini. Mohini says give me some peace, why does Anurag have to protect Prerna always, Prerna always traps Anurag, he met with accident twice because of her, she is unlucky. Veena says first accident was done by Navin, you can scold us, not Prerna. Veena cries. Anupam thinks I hope they both proposed each other.

Navin says its my mistake, I left you alone and that’s why this happen, we will marry and then I will settle your family. Prerna refuses to marry. Anurag imagines Navin. Navin says Prerna is in my captivity, you can’t do anything now. Anurag gets up and says Prerna. Doctor says I have to give you injection, you will sleep after taking this. Anurag says I have to go and save Prerna.

Doctor says you need rest, Mohini wants you to get fine. Anurag says yes, but let me go this time, please stay here. I will go by window, I will come back, I have to save Prerna. Doctor says when you meet Prerna, tell her that she is lucky to get her. Anurag says no uncle, I m lucky that she is in my life, I can’t lose her. He goes by window. Navin asks why don’t you love me, I love you so much, everyone will praise my love one day, I left everything for you, what did you do, injustice, I left Madhuri for you. Goons get pandit. Navin asks him is he fine.

Pandit says I beg you, don’t do anything to my daughter, I will do as you say. Navin says your daughter is yours, nothing will happen to her, just do the work told to you. He says sorry Prerna, I forgot to tell you, its our marriage tonight. Rajesh and Moloy tell inspector about Prerna’s kidnapping. Inspector asks if they have any doubt. Rajesh says we got this info from Anurag, Anurag followed the goons and then met with an accident. Inspector says then Anurag would be knowing it. Anurag comes there and answers. Rajesh asks why did you come here, you should have rested. Anurag says no, I have to save Prerna. He tells vehicle number. Inspector says we can find her, don’t worry, we will do our best. Rajesh says then do it fast, I want my daughter, save her.

Anurag calms Rajesh. He says I feel Navin has done this, I have seen him in ambulance, he was close to Prerna. Inspector asks who is Navin, do you have his pic. Anurag shows Navin’s pic. Inspector says fine, don’t worry. Prerna says pandit ji, don’t get me married to him. Goon ties her again. Navin says don’t stress, you will fall sick, calm down. Pandit gives him mahurat. Navin asks Prerna to get ready.

Navin thinking of Komolika’s words. Komolika thinks of Prerna and thinks how didn’t you fall for me, Prerna why did you come between Mishka and Anurag, I mean Prerna came between me and Anurag, I had to provoke Navin, I m so sorry Anurag has met with an accident, I won’t meet her, else he will feel I m interested in him. She gets a call from Navin. He says Prerna is in my clutches now, I m going to marry her tonight, she will be with me in my arms. Komolika says you will be praised if you succeed, even I can kidnap you, I told you where to find Prerna, why did you get sighted, when you do your work, your manhood will be proved.

Mishka comes. Komolika disconnects. Navin says I will marry and then call you to inform. Komolika asks is Anurag fine. Mishka says you

were involved in my life and I didn’t know, you got Prerna kidnapped, Anurag got hurt. Komolika says he will be fine soon, Prerna is hurting him, we will lose our chance, Prerna is a strong contender.
Mishka gets angry and asks who else is in the competition. Komolika says just one girl deserves Anurag, you should thank me, I don’t believe you. She leaves. Mishka cries and says I can see she has some feeling for Anurag. Mohini says I told him not to go out, even then he left. Anupam says they have come. Veena asks did they find about kidnappers. Rajesh says we will find Prerna soon. Mohini asks Anurag to go to his room. He says I m fine. Nivedita scolds him. Anupam says his state isn’t fine, don’t scold him. Anurag goes and talks to Prerna’s pic. He says I love you Prerna, I will find you. Nivedita hears him and goes.

Prerna sees a candle and gets an idea. Navin talks to pandit. Prerna burns the ropes and tries to run away. She sees the goons and thinks there would be some way. Navin asks pandit to get ready. Goon says that girl has run away. Navin asks Prerna to come out and not play hide and seek. Goons look for her. She gets a phone and calls Anurag. Anurag is speaking to inspector to know about her. He says I will call later, someone is calling me repeatedly. He answers the call. Navin asks goons to find her.

She thinks if I talk to him now, Navin will hear my voice. Anurag says Prerna, say something, can’t you say something, is there anyone there. He asks her where are you, tell me. She says Navin is back, he kidnapped me, he wants to forcibly marry me. He asks what, I will come there and not let this happen, where are you. She says its like some factory. Goons find her. She screams. Anurag says listen Prerna, nothing will happen to him. Navin takes phone and talks to him. He asks how is everyone there.

Anurag says you psycho, I knew this, just you can do this, just tell me where are you, I will not leave you. Navin jokes. He says Prerna is very soft, after touching her…. Anurag shouts no Navin, don’t do this. Mohini comes and asks what happened. Anurag says Navin is back, he kidnapped Prerna, he wants to marry her forcibly, I can’t let this happen, do something, no I will do something. She says call ACP, he will send his entire team, you can’t do anything alone. Anurag calls the ACP and informs him. Mohini goes worried. He sees Mohini gone and says when I was following Prerna, I was at the bridge, I heard the train sound. He leaves. Prerna says I don’t want to marry you. Navin slaps her.