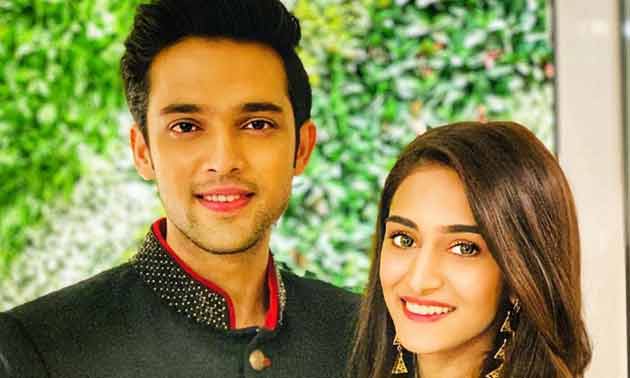 Made For Each Other Monday update 9 December 2019

Mohini saying respect is most imp for me, you have ruined my respect. Nivedita asks Prerna to call Veena here and ask her if she is still her pride. Mohini says you trap rich guys and do the same thing. Tapur scolds Prerna. Prerna says its a lie, trust me, I didn’t do all this.

Komolika says enough Prerna, you think we will agree if you cry and act innocent. Komolika says you have hidden the dirt behind your innocent face, you are exposed now, you want to take revenge on us, they couldn’t throw you out, they are simple people. Prerna says I didn’t do this, I swear, its all a lie. She recalls getting dizzy.

She says I got dizzy, someone spiked the drink. Komolika says go to your mum and tell this story, if she agrees, then you come here. She insults Prerna and says you took over Anurag’s room to celebrate wedding night with someone else. Prerna says enough, I didn’t forget my limits, I have no money, but I have respect. Komolika says I understand, you are frustrated, you showed you are the bahu of this house and then you were caught with someone else, you took revenge and this family lost respect. Prerna says I m not from those who ruin others for revenge, I didn’t do anything to ruin anyone’s life.

She says Tapur you are like Shivani for me, I won’t let anything wrong happen with you. Komolika says you didn’t lose anything, this is your work, you should have spared Tapur, don’t know if anyone will marry Tapur, you know these people got angry and decided not to let Sahil marry Tapur, its because of you, you should leave, you have hurt everyone. Prerna says I didn’t do anything, someone spiked my drink, you have done this. Vikrant is still in the room. He stumbles. Prerna says you wanted to defame me, you did this. Komolika claps and says interesting, I knew you will bring any angle in the story, stop it, no one will trust you.

Anurag says I will trust her, she is innocent, she didn’t do anything. Komolika says come on, how long will you support her, you don’t want to lose. Mohini says truth won’t change. Anurag says I m not with Prerna, I would support any girl, everyone said Prerna is wrong, no she is not, many times what we see and hear isn’t true, truth is I know Prerna, she will never do this, she won’t let wrong happen with anyone, Vikrant is also there in video clip, no one asked him. He says Sahil, I don’t know Vikrant, but I know Prerna, she won’t do wrong with anyone. Mohini asks Prerna to get out of the house if she has shame. Moloy looks on.

Mohini asks why do you always support Prerna, answer me. He says because of love she loves me and now she hates me, she has risked everything as she loved me a lot, she is angry as I broke her heart, she fights me, she loves me, its not a lie, when it comes to love, love is right, my heart says Prerna isn’t wrong. Prerna looks at him. He says I know no one accepted Prerna, what did she do, nothing, she didn’t cheat anyone, she has kept a wife’s duty.

Anurag says Prerna is pure. Moloy smiles. Anurag says Prerna obeys all the rules, she did all this being a wife, she can’t do wrong, the mistake can’t be of girl always, how can everyone say Prerna is wrong, Vikrant can also be wrong, does he have freedom to do anything, why should girls save their respect always, why do we always think that a girl is wrong, why can’t we blame a guy, I would like to ask Vikrant, he maybe wrong, where is he. He goes. Prerna thinks Anurag saved me from getting finished today. Komolika thinks he is taking Prerna’s side today. Anurag says I told you to stay away from Prerna. Vikrant asks what are you saying. Anurag beats him and says I won’t leave you. Prerna stops Anurag. She says Vikrant didn’t do anything, he is also innocent like me, Komolika has done this. She tells everything. Anurag gets shocked.

ladies talking that Anurag is doing wrong to support Prerna. Mohini cries. Komolika says its your mistake as well, you said Anurag and Prerna are just friends, not that they love each other, sorry, but you failed as a mother. Nivedita says its not like that. Mohini says she is right, I promised to make Prerna out, the house respect is most imp to me, we have to throw out Prerna from Basu house, she has crossed all the limits and stained our family respect, I can’t tolerate her in the house, Prerna Sharma won’t stay in this house. Komolika nods. She thinks that Mohini stays on her words and kicks out Prerna.

Prerna stops Anurag and asks do you trust me. He says I trust you, I always hurt you, even then I completely trust you, I can’t tolerate if anyone points finger at you, what I m going to do now is imp. He goes. Sahil’s dad says we are sorry. Sahil’s mum says we don’t want to take this alliance ahead, Prerna and Vikrant have come close.
Komolika starts her drama and says its not Tapur and Sahil’s mistake, why shall we break their hearts, Mohini said she will throw Prerna out of this house. Vikrant comes in the party. Sahil and his dad take him aside and scold him. Vikrant says I didn’t do anything. Sahil says just let it be, you have fallen in my eyes. Vikrant sees Komolika smiling and thinks you are enjoying this sight. She asks why did you do this, Vikrant you should have thought of Tapur, Sahil, and also Moloy’s helpless state. The waiter signs her to come and meet him. She goes. Anupam says you have done the right thing, Komolika’s doubt will turn into belief that you are with Prerna. Anurag says I don’t care if she understands, I can’t risk Prerna’s respect, enough, I have stayed silent till now, but not anymore, its about Prerna’s character, I know Prerna is strong but I m with her, I will prove her innocence, you will help me.

Komolika asks the waiter what does he want. He says I didn’t know your plan, when you become this house bahu, increase my payment. She asks are you blackmailing me. He threatens her. She scolds him and says I won’t waste time on you, you will get double money, go now, I will throw Prerna out. Guests want to leave. Anurag stops them. Vikrant’s mum asks how can he stop the guests. Anurag says a big crime has happened here, a girl’s character is stained for no reason, I don’t want you to go home with a wrong opinion, you have seen just a story, but not its different angles, you were shown just one angle of the story, maybe someone has deliberately done this. Waiter looks on.

Moloy thinks Komolika or anyone else can’t separate Anurag and Prerna, they have true love between them. Anurag says I went to Prerna’s room and saw live camera there, you didn’t think how did a live camera come in bedroom, just think it was done and shown according to a timing, is this a coincidence. The man says we understand, you are saying this as the engagement is breaking. Anurag says sorry, if you keep such thinking, then its better that this alliance breaks, trust is imp between two families.

The man says maybe they are lying that their drinks were spiked, we have no time to waste. Anurag says give me a chance to save a girl’s respect. The ladies agree to Anurag and say we want to find out who doesn’t want this alliance to form. Anupam says the person who wants to insult Prerna. Anurag says yes. Komolika worries that police may come. Anurag signs Prerna. They smile. Komolika takes him along. Mohini, Nivedita and Tapur have a talk. Tapur says maybe someone really wants to humiliate Anurag. Mohini goes to scold Prerna for controlling Anurag. They argue. Mohini says you will be gone when truth comes out. Komolika says its Tapur’s engagement, you made it an issue, you are giving a lecture on Prerna’s respect, you don’t care for your family respect, Vikrant and Prerna are wrong, they should get punished. He says I think you don’t want the truth to come out. She says you are selfish to not think of family. He says Tapur’s respect is linked to Prerna’s respect, I m doing this for Tapur, relation happens because of love, someone has targeted a girl Prerna this time. She asks who is Prerna, why are you supporting her. He says she is my wife in front of the world, I want to expose that culprit, Prerna is framed. He leaves.

Read Next: Made For Each Other Tuesday update 10 December 2019