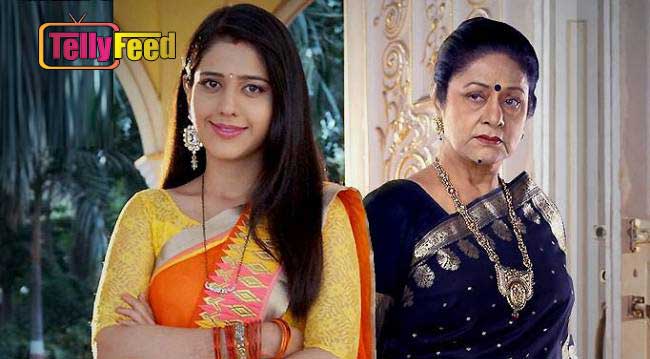 Ansh comes home and tells Bhoomi that he told clients that Pavitra is a mental patient and is undergoing psychiatric treatment. He looks at her romantically and then goes to change his clothes. Bhoomi then hears sound in hall, goes to check and sees Vasundhara there. She asks her what happened. Vasundhara asks her to go and sleep. Bhoomi says she can tell her problem. Vasundhara says Kaveri is troubling her a lot and told she is sending her one more gift, so she is waiting here to receive it before anyone receives it. Pavitra hears their conversation.

Kaveri calls Vasundhara and tells she will be sending her another gift by afternoon and to relax till then..Bhoomi asks Vasundhara what did Kaveri say. She tells her about gift.

Vasundhara with whole family comes for breakfast and are shocked to see someone sleeping in dining table. Pavitra wakes up and asks if they did not see anyone sleeping. Ugly Suman asks why is she sleeping here instead of her room. Pavitra says she did not like soft bed, so slept here on dining table. Ugly starts yelling at her. Pavitra scolds her. Vasundhara signals Bhoomi and she takes Pavitra from there. Ugly tells Latha that her favorite bahu is taking revenge from them like this.

Vasundhara tells family that she wants them to perform pooja in temple and do some charity, but she cannot come. They all agree. Bhoomi takes Pavitra and asks her to stop misbehaving with family, else they will not accept her easily. She says she does not care. Vasundhara takes Bhoomi out and tells she wants to sort out Kaveri’s problem soon.

Ansh comes to bhoomi’s room and asks her to accompany him for temple for pooja as she is his wife. She says she cannot as family members will not like it. Latha comes and says Bhoomi is right, agram will not like her accompanying them. Ansh leaves with Bhoomi.

While whole family is busy performing pooja in temple, vasundhara with bhoomi waits for Kaver’s gift. Pavitra smirks seeing their tension. Vasundhara continues waiting restlessly as the time passes beyond 3 p.m. Pavitra murmurs that real drama will start now. She taunts Vasundhara and says her time is not good. Vasudhara says she should call Kaveri now. Bhoomi calls Kaveri, but her phone is unreachable even after 1 hour.

Door bell rings. Bhoomi asks Vasundhara not to worry and opens door signaling her to calm down. They relax seeing Agrm, Ansh and Inder. Agram comes in happily and tells Vasundhara that her charity paid off and they met Kaveri did in temple. Bhoomi is shocked to hear that Kaveri is Ansh’s aunt and Agram’s sister. Kaveri enters with Latha and ugly Suman.