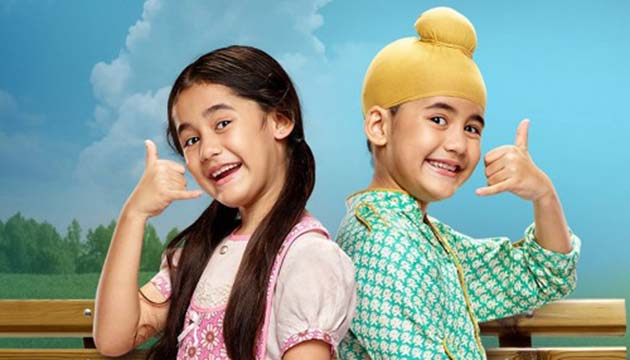 Crew gets kids in room and offer them to take a seat, Kulfi says we were sitting near a dustbin we are all dusty, she says no worries take a seat, crew starts interacting with them, Kulfi asks what do you want, he asks why are you wearing same clothes, Saraswati says it’s our uniform, he asks which school, Saraswati says nana bhai government school, kids start jumbling with answers,rocket keeps covering,

Falana asks why do you want to participate, Kulfi thinks how will I tell them truth, everyone gets scared, Saraswati says who doesn’t want to participate in such competition, Falana asks where are you parents and what is your group named, what will we address you with, Zinda says benam,falana is informed not to scare them more and let them perform first then their identity will be revealed and when police will arrests the, our TRP will hit high.

Crew informs them they can have food, kids start having food, before they could start they are informed it’s their turn to get on stage. Sikander, amyra and lovely arrive at the venue. Kulfi feels sikanders presence but doesn’t see him and gets in, Kulfi sees the stage and gets scared, anchor asks the kid performing how is he feeling after performing,and asks the judge pandit Bhave to rate the performance,Bhave scores 1 on5, Audience vote the performer, and he gets eliminated.

Sikander is interviewed and ask how he feels about amyra performing. Sikander says all the best to amyra and other kids performing, Amyra is asked she loves rap is performing a rap song, while answering amyra has difficulty in breathing, Kulfi and friends are given instruction, they get on stage scared, audience start insulting them. Sikander says Amyra practice a little and all your nervousness shall go,amyra says I can’t, sikander says your dad is with you, amyra says no there are so many people. Kulfi and friends hungry and unable to focus, rocket say I wish we knew some song on hunger, sikander motivates amyra to sing, Kulfi thinks why did I feel Baba asked me to sing, Kulfi and kids begin their performance.

Crew says great this group has story and talent too hope they get selected.

Anchor praises kids and asks Panditji to score, Panditji says my whole life I have given to music and this isn’t music, amyra gets out excited for being selected to second round,sikander and lovely very happy. Pandit says to kulfi and friends your song had no rhythm, and you sued these stupid things as instruments, this stage isn’t joke,this stage isn’t for you,and scores 2, Mia gets annoyed because of Panditji, anchor says guys don’t loose hope, we still have audience pool, but only if you score 5 on 5 from, all the best. Kulfi and friends already loose hope and feel disheartened, Bansi says instead of humiliation let’s just leave, Kulfi says we can’t loose hope let’s just stay,Audience score kulfi and friends 4.

Mia decides to keep kulfi and friends in the show, and change

the score to 5, sikander asks crew what’s the noise about, he says it’s benam group they got selected, Sikander says name is benam strange.kulfi and friends taken to waiting room,Bansi says so many instructions I want food, Mia greets them, and praise them,crew introduce Mia, mia whispers falana are their hungry reactions recorded he says yes,Mia asks kids you need something, falana did they eat anything,Mia says god how can you keep kids hungry, Kulfi says please don’t scold them,Mia says falana she is so sweet get them food quickly, Mia whispers keep recording them.

Kulfi and friend remove their masks on crew leaving and start having food,Zinda says I haven’t had such yummy food ever. Mia watching says keep this we will use it when we reveal them.Amyra says dad they loved my song so much I’m so happy, crew informs amyra will be called in knock out round.
Amyra says I will win this and then we will be family no 1.sikander says Amyra rest now and leaves.

Chittu sees noodles and asks what is This, Kulfi says it’s pasta even I didn’t know about this when I came here let me help you,Mia sees kulfi and says she is my heroine, she will g sympathy audience love such characters and then my TRP, just one thing missing and that is my villain, and we are ready to role. A girl passes by amyra saying I’m the winner here, all are freshers. Falana gives few songs to kulfi and friends and says you have to rehearse these in 15 min for next round, Kulfi says we have to try and do it, they start hearing to songs. Lovely walks to hansika and says so you cleared first round, hansika says obviously I know I’m the winner, Lovely says awesome but knock out round is tomorrow what are you doing here, she says oh god thank you aunty and leaves.

Amyra says mom what did you just do, Lovely says no one will come between you and trophy I will make sure, come here don’t panic, sikander calls Mohendar, Mohendar at police station, Sikander asks is she fine what is she doing, Mohendar says she is sleeping, police says kulfi is part of these kids who ran away, sikander asks who is calling Kulfi I can’t hear you, Mohendar says neighbours I will call you later.

Sikander sees Vaishali decide whether they will win and loose with a rose, sikander says trust and believe in yourself and you will win, and goes. Kulfi walks to them with clothes, sikander leaves, rocket says a uncle just told us to believe in ourselves to win, Kulfi says such wise words.