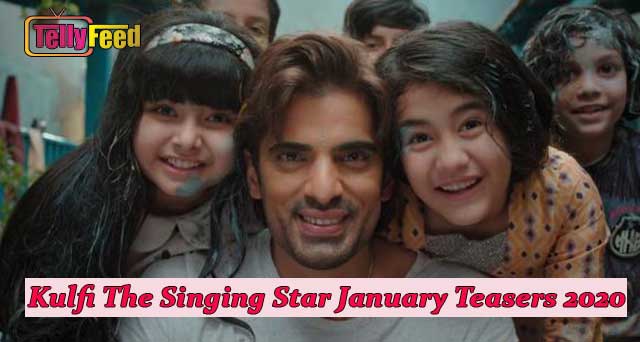 Loveleen hallucinates in prison, while a helpless Sikander agrees to do the unimaginable to save Amyra, Read Kulfi The Singing Star January Teasers 2020.

Kulfi decides to search for Matka while Loveleen faces a tough time in jail. Later, Sikander pays her a visit.
Thursday  2 January 2020

Kulfi and the other children dress up as Gods while Mahinder is concerned about Sikander. Meanwhile, Loveleen learns of a possible way to escape prison.

Kulfi and Amyra plan to make some money to buy an idol of Lord Ganesha. Later, Sikander takes them out for a treat in celebration of his new job.
Wednesday 8 January 2020

Sikander panics at the restaurant after losing all his money. Later, he creates Lord Ganesha’s idol while Loveleen has a tough time in prison.
Thursday  9 January 2020

Kulfi is shocked to spot Amyra with some unusual people while Loveleen and her friends create a bomb in jail. Later, Kulfi catches Amyra doing the unthinkable.

Amyra is petrified as Kulfi gets cornered by a gang of thugs. Elsewhere, Sikander is shattered while the police suspect Loveleen’s intentions.
Tuesday 14 January 2020

Kulfi and Amyra bake an unorthodox cake while Loveleen does the unthinkable to escape. Later, Amyra is shattered when her friends confront her with bad news.
Loading…

Loveleen is delighted to see Amyra while the boss asks Sikander to sing his favourite song. At midnight, Amyra gets terrified on spotting a thief.
Thursday  16 January 2020

Kulfi is suspicious after spotting Matka behind Lord Ganesha’s idol while Sikander makes a request to his boss. Later, Loveleen hatches an ingenious plan.

Loveleen blackmails Sikander after her cunning plan faces some unforeseen complications. As the police arrive at the society, Amyra demands the truth.
Monday  20 January 2020

Loveleen’s threat regarding Kulfi infuriates Sikander. Later, the police raid a godown to arrest her while a helpless Sikander searches for Kulfi.

In his desperate search for Kulfi, Sikander obtains a vital clue. Elsewhere, Jimmy attempts to regain his reputation with a clever plan.
Wednesday 22 January 2020

Kulfi and Amyra are thrilled when Damji gives Sikander a job offer to sing. Later, they are delighted to get a poster of a singing competition.

Jimmy berates Kulfi upon spotting her holding a poster for a singing competition. Later, Loveleen hallucinates in prison while Sikander searches for Amyra.
Friday 24 January 2020

Sikander gets a distressing call about Amyra and has a breakdown. Later, he lies to Kulfi about it while she faces a problem after enrolling in a competition.

Kulfi records her song with the help of Sandy while Sikander gets a clue regarding Amyra’s whereabouts. Later, Kulfi gets an unexpected phone call.
Tuesday 28 January 2020

Sikander grows desperate as all traces of Amyra seem to disappear mysteriously. Later, he assaults a police officer while Kulfi hides from Jimmy.
Wednesday 29 January 2020

Sikander makes a breakthrough in his investigation and attacks a suspicious man late at night. Meanwhile, Kulfi gets a vital clue.

Kulfi and her friends encounter a dangerous gangster in a godown when they desperately search for clues. Later, Sikander makes a blunder while cooking food.
Friday 31 January 2020

Sikander is kidnapped and given an ultimatum while Kulfi receives a vital clue. Later, Jimmy reveals an integral part of his evil plan.