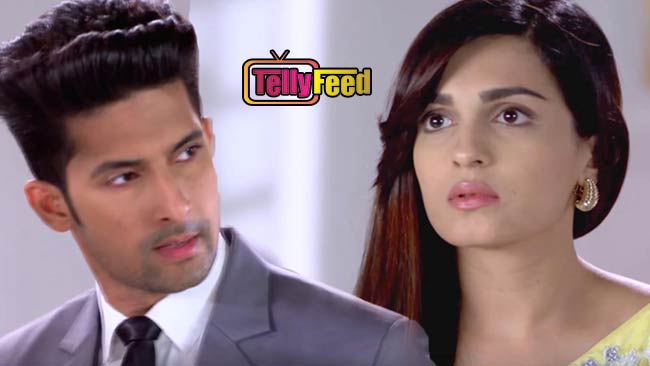 He says Payal will not come and check being rich. Satya thinks this outing will be costly for him. Mahi brings Payal there. Payal hears everything. Mahi says he is a cheater and double cross everyone. Payal says I was betrayed by you, and says you was weak and I will not trust you. Mahi asks Satya not to enter her home again. Satya tries to reason with them. Mahi looks on angrily and goes. Satya is tensed.

In the house, Mahi looks for Koel and calls on her number, but it is off. She thinks it seems Koel went. She thinks Satya told about the bungalow, and thinks to call him. Then thinks what to do? She thinks I have to do this for Koel, and calls him. Satya sees Mahi’s number and recalls Mahi humiliating him. He picks the call and says I am tensed. She says Koel went somewhere to the unsafe place. Satya says I can’t trust you, you can call me there and murder me. Mahi asks him not to joke and says it is about my sister’s safety. He cuts the call. Satya gets ready. Kajal asks him to send that address. Satya says no, and says she can land in problem. Kajal asks him to decide if he likes her. Satya says no

Koel asks Mahi to get out and says he is my hero, and can come to my room. Mahi and Satya go. Koel comes running after Satya and apologizes for burning the dress. She says you have saved me, and I know you don’t hate me. She says you are cute…and goes on talking….She says I will go and get ready. Satya sees Mahi coming downstairs and continues to look at her. Dekha aapko song plays………Mahi comes and says hi to Dhawal. Dhawal says you are looking absolutely stunning. Mahi thanks him. Dhawal says I have a surprise for you, and shows a chain and pendant.

Mahi refuses to accept costly gift and apologizes. Dhawal says it will be beautiful when you wear it darling…..Satya says wah…Dhawal says I will make you wear it. Mahi says it is okay and tries to stop him, but in vain. Dhawal stucks Mahi’s hairs in chain. Mahi scream in pain. Satya says main khiladi tu anadi and asks Dhawal to let him free her hairs. He opens the hook and frees her hairs. Meherbaani song plays……….She feels sensuous with his touch….Naina smiles looking at them. Dhawal feels awkward….

Satya signs Mahi that it is done. Dhawal apologizes to her and tells that he has kept party at his farmhouse. Koel says we will also come and asks Satya to come. Satya asks Naina if she is fine…Naina smiles and blesses him. Mahi looks at them. They leave. Payal asks Naina why she is smiling? Naina says she is seeing God’s miracle. Payal says he is not Siddharth’s son else I would have not let him enter home. Naina says he is not Sid or his son, but he is his lookalike, who will take care of us, like Siddharth had done. She pins her hope on Satya.

Al the party. Satya couldn’t bear Dhawal touching Mahi. Dhawal introduces Mahi to his friends. Mahi feels uncomfortable. Dhawal asks what happened and touches her intentionally. Satya gets worried for Mahi and thinks to do something. Koel tells Satya that she is feeling great back with him and says she will bring drink. Satya says I will bring and goes to sit on the chair beside Mahi and Dhawal. He makes him falls down. Dhawal gets angry..

Satya asking Dhawal to go to washroom and dry his pant else people will misunderstands him. Dhawal goes to washroom. Satya tells Mahi that she is looking nice in his dress and color. Mahi says you have done this intentionally naa. Satya says it was his pant. I can’t wet his pant. Mahi says dirty…She asks him to stay away from her. Satya asks her to decide who is better, he or that mad man. Mahi says he is not mad and says my mum has chosen him. She asks him not to call him maa ka laal. Satya says every child is maa ka laal and tells your mum is not durga maa. Payal argues with him and gets angry. Koel comes back and asks them to stop fighting. Mahi and Koel have food. They say it is spicy….Satya gives water to Mahi and gets concerned. Koel gets jealous seeing his concern
for him.

Someone collides with a waiter and his tray falls. Man scolds waiter. Mahi helps him pick the tray and asks him not to feel bad as there are many people in the world with different mindset. Satya gets touched by her gesture. Koel says her social service started again.

Dhawal’s friend tells him that his girl friend is good and asks him to give a tablet to her to make her rocking. Dhawal spikes her drink and goes to her. He asks her to take it. Mahi refuses, but Dhawal makes her eat it. Satya tells Mahi that Dhawal is mad, and asks why you are not dancing with him then. Mahi says he is not mad and asks why you are following me. She finishes the juice and says you are mad. She goes to Dhawal and asks can I dance with you. Dhawak says sure..? Satya asks someone why Mahi is behaving this way? Man says how do I know? Mahi dances madly under the influence of drug. Satya wonders what happened to her……Her dress zip opens up….Satya takes her to side and zips her dress. Dhawal says what the hell?

Mahi asks Satya not to touch her….Aye dil bata……song plays while they have an eye lock….Satya asks who gave you drink. Mahi asks him not to touch her. Satya asks her to shut up and asks her to sit down till he brings water for her. Mahi sits on chair. Satya goes to bring water. Mahi gets up and laughs….Satya hears Dhawal’s friends watching Mahi dancing in the video and say nasty comments. Satya asks them to give that video to him else he will beat them. He breaks their phone and asks them to respect women else he will be back to beat them. He goes back taking water for Mahi and sees her gone. He wonders where is she and goes out. He sees Mahi resting outside. Dhawal comes and asks him to go. Satya says okay I will go. He asks Mahi where is Koel? Mahi says she went and got angry with me. She asks why did she get angry?

Satya is driving car while Mahi is sitting with him. He thinks what is happening in his heart. Mahi asks what is happening? She says although we hate each other, but destiny brings us closer….He tells her that whenever you need me, I will come. He brings her home. He lifts her and takes her inside the house. He makes her sleep. Khamoshiyan song plays……………He turn and sees Naina there.

Satya telling Naina that whenever he tried to go far from Mahi, but destiny brings them closer. He says I am born and brought up in chawl and doesn’t understand anything. He says I don’t know what is going on inside my heart. Naina says you will understand everything and asks him to hear his heart, and then he will get all answers. Koel blames Mahi for snatching Satya and calls her boyfriend snatcher. Mahi says there is nothing between us. Koel gets angry and leaves. Naina comes to Mahi. Mahi tells her that there is nothing between Satya and her, but Koel is misunderstanding them. Naina asks her to relax and says you are misunderstanding Satya, he always protected you. Mahi recalls Satya saving her many times and says she shall apologize to him. Naina thinks Satya is lookalike
like Sid and is also like him. She thinks he will expose Payal’s true face.

Payal asks Satya to get signs of chawl people. Satya says okay. Koel comes and asks Satya to come. Satya says I can’t go, but she forces him. She gets closer to him and falls on him. Mahi comes and sees them closer. Satya tries to push Koel, but in vain. Koel shouts at Mahi for coming to her room. Mahi goes. Satya comes to Mahi and gives explanation to her that Koel was getting close to him, but he is not interested in her. Mahi gets angry and asks why is he giving explanation, and says she don’t believe him. Satya says I don’t want you to misunderstand me. Mahi asks why do you save me always and then shows your favor. She asks what is our relation and asks him to tell. Satya holds her closer and they have an eye lock..