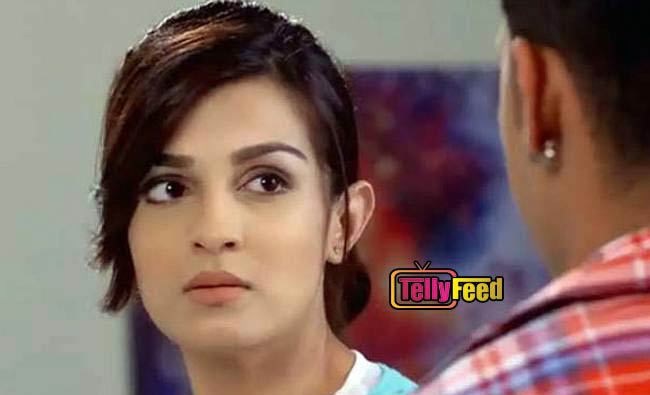 Satya staring Koel and thinks she is staring you. He thinks I don’t have 25 Rs in my pocket and bill can come upto 25000 Rs. He sees Mahi standing and says table is for 2 and we are sitting. Mahi takes a chair and sits with them, saying what is the point of sitting separately. She says you might know this restaurant menu card and asks him to order something. Satya looks at the menu card and sees price of the dishes. He thinks what to do? He thinks if I order something then my 6 months salary will be gone, and if more than that then all year salary. Mahi says I will order and calls waiter. She asks waiter to take order from his regular customer. Satya says waiter is new and asks her to order the food. Mahi orders many dishes. Koel asks if you will eat these many dishes…..Mahi
says yes, I am hungry. She asks do you have any problem. Satya says no, he has money and curses her.

A waiter sees Satya and calls his name. Satya sees him and thinks he is Sanjeev. Sanjeev tells other waiter that he is Satya. Mahi tells Satya that he is calling you. Satya says I am owner. Mahi asks Sanjeev if he is calling Satya. Sanjeev comes. Koel says how downmarket? He asks why he is smiling as if he is your friend. Satya gets up and hugs Sanjeev. .

Payal comes to Basti. Sunil talks to her and says this is our home. Payal says this offer is advantageous to you. Sunil says no. Payal argues. Kajal hears her. Waiter brings fish dish. Mahi thinks he can’t eat this. Satya says ladies first. Mahi force feeds food in his mouth. Satya tells Koel that he will make Mahi eat fish best part. Mahi says no, and says nice. She drinks juice. Koel says your taste is good Satya…..She asks about his zodiac sign. Satya says Virgo. Koel says I will check your sign’s compatibility. She says you are compatible with scorpio. Satya and Koel do hi five. Mahi is surprised. Koel asks when is your birthday. Satya says my birthday is on Janmasthami. Koel says we have to do something.

Satya’s phone rings. Koel says waiters’ can’t keep their phone on silent mode. Mahi says it is his phone. Satya says this is not my phone, and makes an excuse…that it is driver’s phone as my phone went in pool. He takes the call. Mahi says he will not pay the bill and run away. Koel says didn’t you see his car. Mahi says he don’t have money and goes to check on him. He attends Kajal’s call asking him to come home fast. Satya says I will come. Mahi tries to hear him and collides with him just as he turns. She collides with waiter and asks Satya can’t he see and walk. Mahi says I went to washroom. Waiter asks who will pay the loss. Mahi asks him to add loss in bill and says he will pay bill….Satya comes back to Koel and says his dad got a heart attack so he need to leave after paying bill. Koel says I will pay and asks him to go. Satya insists to pay, Koel asks him to go. Mahi says let him pay naa. Satya says okay and goes.

Payal’s employee tells her that he will talk to Sunil’s brother Satya, says may be he can help us. Payal asks him to fix meeting with Satya and says this deal can’t go from our hands. Gangu Tai is coming towards the chawl. Satya saves her as she is about to hit with Payal’s car. He gets angry and says he will beat them. Gangu Tai asks him to come. Payal couldn’t see them and says they came on his way. Kajal tells Satya that tomorrow is his birthday. Satya says I am busy in the morning. Kajal says may be he got rich girl in his life. Gangu Tai says what is the need of rich girl. Satya says he will do something big.

Koel gives perfume to Satya as a birthday gift. Koel asks did you like it? Satya says even Devi and devta must apply it. She says you are looking handsome. Satya says even you are looking beautiful and gets closer. Mahi comes inbetween them and wishes him happy birthday. Satya says don’t know from where the sun have risen today as she is wishing me birthday. Mahi acts to get stomach pain and tells that she can’t join them today. She then tells Koel that her stylish called and says today is your appointment. Koel says I can’t go. Mahi says there is no appointment till month ends. Koel is shocked and says I will go. She goes. Satya comes out of dance class. Mahi thinks I will expose you Satya. Satya sits in auto and goes to his basti. Mahi follows him in her car. Satya gets down the auto and then again sits in. Mahi says I will not leave you Satya. Satya asks auto driver to stop when his basti comes. Mahi thinks what to do as he steps down the auto.

Mahi coming to Satya’s locality searching him, and enquires with the boys if they know Sats…They say no. A boy recognizes her as she has helped her and tells about Satya’s address. Mahi comes to his house, just then Gangu Tai throws trash on her. She apologizes to her. Mahi says you didn’t do any mistake as I haven’t see when you was throwing it. She asks if you know Satya? Gangu Tai says he is my son and says his photo is hanged on the wall. Satya tells something to a vegetable seller and hides his face. Mahi steps inside the house and is about to see his pic, but just then vegetable seller shouts and rings her car horn. Mahi hears her car horn and rushes there. Vegetable seller tells Mahi that he have a loss because of her. Satya tells dialogues while he repeats it.
Mahi says I will pay for the loss. Deepu comes and asks if poor have no respect. He tries to hit on the car. Satya thinks Mahi got into real trouble and thinks to protect her. She thinks where did I get trap because of loafer. Satya asks seller to get Deepu busy, and goes to Mahi with his face covered, he holds her hand and takes her to car .Kuch Toh Hai Raapta song plays………..Mahi looks at him….He turns to go, removes his scarf and starts walking humming the same tune. Mahi picks his scarf and thinks who was he. I couldn’t see his face….She sits in her car and leaves.

Mahi comes home. Koel is laughing and says your dressing sense is shabby. Mahi says I went following Satya and asks her to trust her. She says he went to some dirty basti, and says if he is rich then why did he go to dirty basti. Koel says you are chipku, makes us embarrassed and saying that there is wrong with him. Mahi asks her to come and see.

Payal scolds her employee for unable to fix meeting with Satya. Employee promises that he will bring him tomorrow. Payal says no, and says she will go and talk to Satya. She says basti people should know who is Payal. Mahi insists Koel to come and see. Koel thinks may be Mahi is right and comes with her. They come to the Basti….Koel says its dirty and you are saying Satya stays here. A boy gifts googles and tshirt for Satya. He says we have saved money for 3 months. Satya gets emotional and says you are my best friends. Although we don’t have money, but have big heart.

Satya tells that his sister will bring cake. Kajal brings cake. Satya cuts cake while the children wish him happy birthday. Kajal applies cake on his face. Koel tells that her dress is ruined as steps in muddy water. Mahi says you need to know the truth and asks her to come. A boy shows Satya that they came. Satya sees them and tells boys that they have to show Satyagiri to them. Satya comes to them and asks what you are doing in such dirty place. Satya says dirty place. What shall I tell with my own mouth and asks them to see. They see boys playing. Koel says I didn’t understand. Satya says they are chawl’s kids. I celebrate my birthdays with these kids. He says I have everything, and I help them get education and a good living. Boy comes and hugs Satya, says you have made my life. Mahi says just then he showed me his house. Koel says you have doubted on this honest man, and gets angry on her.

Satya asking Mahi and Koel, why they came here. Koel scolds Mahi for doubting on Satya. She apologizes to him and asks him to let her make it up for the mistake. She invites him for long drive in her car. Satya says I will be busy. Koel requests him. Satya agrees and says my mum told not to break anyone’s heart on my birthday. I will come. Mahi looks on. Koel says perfect, I will call you in the evening. Payal comes there with her employees. Koel asks Mahi to come and goes. Satya asks Mahi why you are after me? Why you are behind me. Mahi says my foot and hits on his foot. Satya is in pain. He wears his googles and goes home. Gangu Tai asks Satya to spend his birthday with him. Satya says I will stay all my life with you, and says he is going to get his birthday gift to her.
Gangu Tai gets happy. Payal knocks on their door. Gangu tai asks what do you want and gets shocked seeing Payal’s face. She thinks she is Neil’s sister in law. She thinks if she recognizes me then, and if she sees Satya then everything will be ruined. Payal couldn’t identity her and says she wants to talk to Satya. Gangu Tai asks why? Payal says I have to talk to him about basti redevelopment. Satya calls Gangu Tai from washroom and says water is not coming. Payal asks if he is your son…she thinks voice is familiar. Gangu Tai thinks if she sees Satya, his face is like Sid. Satya comes out with soap froth on his face and asks her to switch on motor. Gangu tai tells that Sunil will talk to her. Payal says I want to buy your land and not you. Gangu Tai says we are not greedy and closes door on her face.