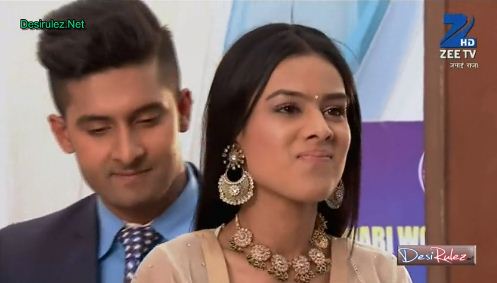 Sid and Roshni come home. Resham says he is Sid. Roshni asks her not to be shocked and says Sid have acted to expose Yash. Kesar is shocked. He says Yash came here and said that he have met with an accident. He says DD took him to hospital. Roshni feels like fainting and cries. She asks him to save her mum. Sid asks her not to be tensed. Sam comes there and is happy seeing Sid fine. Resham tells her that Sid is fine and did this to trap Yash. Resham recollects and tells Sid that she had seen CCTV footage of their home in Yash’s phone. She says DD is kidnapped by Yash. Everyone is shocked

DD is seen in a jail like place and shouts if anyone there. Yash comes there and says I am here sasumom. He acts like mad. DD asks what happened to you? Why you are behaving this way. Yash asks her why did you ruin my life, and gave much priority to Sid than me. Sam cries and asks them to shut up. She says although we do fight much, but that doesn’t mean that I will believe you. She says Roshni is doing this to break my marriage, and tells Sid that Yash always supports them.

Roshni asks Sam to stop it and says you don’t know anything. She tells that Yash’s game have started from God and says Yash is behind those cheap games. She says Yash have kept small cameras in our house. She shows one of the camera kept in the vase. She says he is watching us every second and recording us. She says he had even kidnapped Ayesha and made Sid to do strange things so that his loved ones go far from him.

Roshni says what else do you want to hear Sam. He has ruined everything. Sam says I don’t want to hear all this, I will call Yash now itself. She calls Yash, but his phone is switched off. Roshni says Yash will not answer any call and will not returned as his truth is out infront of us. Sam says but why he will do this. Sid says I can get it now, attacks on family, Ayesha’s kidnap, etc and says his motive was something else. He says he wants to break sasumom and my relation, but I won’t let this happen.

Yash telling DD that he used to love Roshni very much, but you didn’t let me marry her, and asks why did you get Roshni married to Sid. He sings marry had a little lamb. He says you have made my life ruined and got me married to Sam, who made my life hell. He asks why did you get that witch marry me, as Sid suggested. He says Sid have taken care of his and asks why did you put that garbage bin on my head. Sam asks Sid, why did you get me married to Yash. Sid asks her to shut up and reminds her of her suicide attempt. He says you have an attitude problem and can’t make your life better. He says you have made Yash as a bad criminal and asks her to shut her bl**dy mouth. Sid says Yash would have talked to me and I would have pulled him out of the trouble. Yash tells DD that he tried to make everyone know that Sam have become troubled for him, but everyone asked me to do adjustments.

DD asks what you will get by doing this? Yash laughs and says he will get happiness. DD says why you are raising question on my decision, and says you have decided to marry and it was your decision. She says look at your face, you are looking like a wolf and I am happy that I didn’t let Roshni marry you, but Sid, atleast he tries to become my son and think of our betterment. She says once Sid comes here, he will end your jokergiri. Yash gets angry and throws match stick in her cage. He says I explained to you, but you didn’t understand, now you have to pay a big price, laughs madly.

Sid, Roshni and Simran come to the police station and file kidnapping case against Yash. Simran says how can Yash do this. Inspector gives Yash photo to Constable. DD calls if Yash is there and says I need to use washroom. She opens her hand. Sid gets teary eyes. He says she is my sasumon, and is a fighter. She will not accept defeat and will find a way anyhow. DD manages to open the lock of the door. She comes out and sees Yash standing. He asks her to get back in and says your intelligence will not work here. He shoots near her to scare her.

DD gets in. Yash asks her not to do this again else he will shoot her. He laughs and tells her bye. DD feels helpless. Sam cries. Simran asks her not to cry. Roshni asks her not to cry. Sid gets Yash’s call. He asks her to take something which is placed in the lobby? Sid finds a phone there and picks it. Yash says you can’t tap this phone. He asks him to come to sunset point in the evening and not to inform Police, else DD will die. Sid shouts Yash….Yash…Roshni tells Sid that she will also come with him. Sid says no, I will go and bring sasumom home. I won’t return without her and promises Roshni.

While going to sunset point, Sid recalls his moments with DD and her words that he is her son who had left her in his childhood. He reaches sunset point and calls sasumom…Yash. DD calls him in a low and weak tone. Sid turns back and sees DD hanging in air through a bulldozer and rope. DD asks Sid not to leave Roshni and support her. Sid says nothing will happen to you sasumom. He runs towards the bulldozer. Yash holds the rope and says lets have fun. He frees the rope tied to the bulldozer. Sid runs to hold the rope and shouts sasumom.

Sid sees DD falling down the cliff and holds the rope. Yash says what a thing….Jamai Raja have managed to pulled DD up. He hits Sid and asks if he is enjoying. Sid begs Yash to leave sasumon and says she is my maa. Yash says Sid is begging infront of me, and laughs. Sid says if anything happens to my sasumaa then I will kill you. Yash slaps Sid repeatedly. Sid manages to hold the rope again. Yash says lets play with fire and lights the rope on fire asking Sid to save DD now. DD is shocked to see Yash burning the rope and laughing. Sid is shell shocked seeing rope breaking and DD falling down in the cliff. He shouts sasumom.

Yash burning the rope to make DD is falling down in the cliff. Sid shouts Sasumom and jumps to hold on the rope. DD gets tensed. Sid manages to hold the rope on time. Simran looks for Roshni in the house and thinks where did she go? Yash crushes Sid’s hands with his legs, so that Sid leaves the rope. DD asks Sid to let her go and apologizes to him for misunderstanding him. She asks him to take care of Roshni. Sid says I won’t let you go anywhere, your son is with you sasumom. Roshni comes there and sees DD hanging in air through the rope. She asks Yash to leave her mum. DD asks Roshni to leave. Yash pushes her and she falls down. DD asks Sid to take Roshni from there and run. Yash puts knife on the rope and tells DD that your jamai can’t save you now.

Sid asks him not to cut the rope. Roshni gets unconscious, but somehow gains consciousness and shouts Mom. Sid begs infront of Yash for DD’s life. Yash enjoys Sid begging him. Yash cuts the rope with force. Sid shouts Sasumom and runs to hold the rope, but DD falls in the cliff. Roshni asks where is my mom? She reminds Sid of his promise and asks where is my mom? Yash sits in the jeep and tries to go. Sid runs towards him, beats him up and is about to kill him with stone, but just then Police comes and arrests Yash. Simran and Raj comes there with Police. Roshni shouts mom and insists to go down. Simran says no and tries to console her.