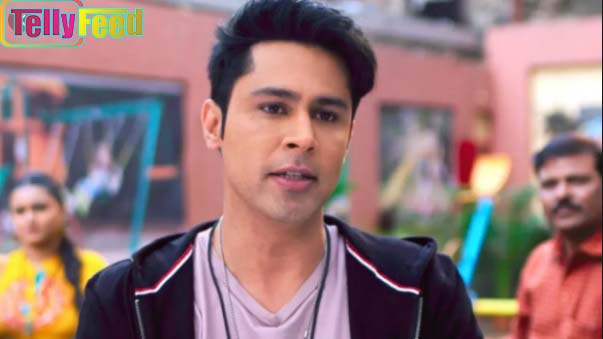 Jia sees newspaper. Arjun has been found by police. She runs downstairs to tell everyone. Whole house is decorated with welcome back banners. Jia says you all knew. Bini says we wanted to surprise you. Jia says lets go. Bini says he is on his way. Akash says Krishan is bringing him. Nisha says yes he is coming don’t worry. Make his favorite dish.

She cooks his favorite dishes. Akash says wow you made all this. Jia says wheree is he? He says he will be here in 1 hour. Jia says should I call? Akash says I just called. He is on his way. he isn’t picking. Jia faints. They take her to room. Akash says she wont wake up till morning. Nisha says it has no side affects. She will be fine. Bini says we are doing this to get her out of depression. Krishna says she will wake up tomorrow

and ask for him.
Jia wakes up next morning. she says how am I here? Its morning?? Where is Arjun? Akash says when she calls on Arjun’s number. She comes downstairs. She says where is arjun>? Bini says he was waiting for you. He left this note for you. Jia reads didn’t want to wake you up. There is a meeting. We will have dinner together. Jia says I never had dinner with him. Akash says we all sat here and had dinner. Bini says we all talked so much. You were stressed. jia says don’t play this game with me. I never saw Arjun. He never came here. You both are hiding something. I will talk to him. Call him. Jia dials arjun’ss number. Krishan leaves. Krishna talks in Arjun’s voice. He says Jia.. I will come in evening. She says Arjun where are you? He says I will come home. There are meeting. Akash you spoke to him. JJia says he sounded worried. He never cuts call like that. I wont move from here until he comes back. Akash says please eat something. Nisha says have this juice please. Bini says dont’ worry he will be home. Jia says I will wait for him. Nisha says wake up when he comes. They all go to their rooms.

Akash says what should we do now. what was that voice.. Krishan says that was the voice moderation device. Krishna says let her wait. He texts her that he will be home late. Bini says you should rest. Jia says I am fine I will wait here.
Nisha says to Krishan I hope everything is as per plan. He nods.
Jia falls asleep on couch. Someone in a hoodie comes close to her. The man has a knife in hand. Jia wakes up with water drops on her face. She says water.. She sees the shadow of man in the water.

Jia wakes up. she sees the shadow. Jia wakes up and screams. the man runs. Krishna runss after him. Nisha says this is the second attack on her. Akash says please do something for her security. Nisha says we should give this responsibility to Krishna. Krishan says I will be with her now. Bini says Jia lets go to your room. She says I will wait for Arjun here.

Nisha says call Jia. He calls her from the other number. Jia says everyone is lying. Arjun never came. He calls her. Ajrun says sorry Jia I will be late. You should take food and sleep. she says who are you? You are fooling me from his number. You aren’t Arjun. He says what are you saying. Go sleep. I love you. Nisha says saying i love you for first time? He says I never loved anyone. She says it will be fun when Jia’s

heart breaks. He opens the door to leave the room. Bini sees her. She says you here.. He says I was investigating her about the case on her.

Jia is asleepon the couch. Bini sees her. Jia wakes up. She says this breakfast.. Bini says this is the plate from which you and arjun had breakfast. Jia says stop lying. arjun never came here. He didn’t come here. he didn’t meet me. Stop lying to me. Why are you fooling me. He never came back. akash comes. Jia says what truth are you hiding. Arjun never came. Nisha says check your phone. You took a seflie with Arjun. Jia sees selfies and says this is a lie. This all isn’t truth. Akash says let me call the doctor. she says I will only call the doctor I trust.
Doctor comes to meet jia. Akash says he will tell her she is fine and she will know we are lying. Jia says I am perfectly fine. He asks everyone to come in He says I feel like she has short term memory loss. This happened due to stress. People mix between imagination and reality. Jia says I am forgetting things. I am sorry. Akash says you need rest. Nisha says to doctor thanks for your help.
Jia says I have no such disease but why are they lying to me?

Bini says to Nisha how did you convince the doctor? She says I told him the situation. He understood. Krishan asks jia what did you do? She says just some blackmailing. She says I am doing this to get my daughter back.
Bini put papers on the table. Akash says give me the papers? She says I just placed them on the table. Why are they not on the paper. Nisha stole them. She says in heart sorry jia once you go away from them only then you can come close to me.
Jia sits by pool. she sees her name on the water. Jia is dazed. Krishna comes and says what happened? she says I don’t know if I should trust you. Arjun said on call that he will come back. Or maybe it wasn’t ajrun with a voice similar to him. I never met arjun. I don’t know what are they doing. Will you help me? He says I will try my best. She says I will find out what is happening. And I have a full proof plan.

Nisha’s tv isn’t working. She turns it on and sees the video of her thugs throwing arjun in water.

Nisha sits. She gets current. She says maybe I am stressed. Krishan brings Jia camera. She says I will place it here so no one can see. She tries to place it. Krishan brings her stool and holds her hand to get up. She fixes it. Jia says I will connect it with my room. I will know what game are they playing. Thanks for your help. He says you are welcome.

Krishan says I have to tell everyone about Jia’s plan. Jia texts Arjun texted that he will come at 8. He says great. You will know all truth today. She says I will catch them with the video.
Krishna tells everyone. Akash says we should text her that arjun wont come home. He says she will know she is wise. Nimki says lets break the camera. Krishan says she will know.
Jia asks bini and akash to come downstairs. Akash

says to Bini why did you have to text Jia? Bini says you think I do it all wrong? He says I was never upto this plan. You forced me. She says did you have a plan? If you consider my advice force I wont say anything.
He leaves. Nisha comes in and says don’t cry. Akash is very stressed thats why he was angry. He will say sorry don’t cry. Bini says I don’t need your sympathy. Nisha says you are right. But i am your mom. Couldn’t see you in tears. Bini leaves.
Krishan comes to Nisha’s room. She isn’t there. She calls and says do something. She says I am bringing and technician who would help us.
Jia waits for arjun. she says he didn’t come. I will find truth today. She sees bini and akash. Jia says what are you two doing here? Bini says came ot ask you for dinner. She says I will eat with Arjun.
Bini says what will we do now? Krishan says don’t worry. Akash says where is nisha? he says she is resting in her room. Go and rest.

Jia opens laptop. Bini says what will Jia say. Akash says where is nisha? nisha comes in. Akash says where were you? Jia says will you all come in please? She says I fixed a camera in my room. See this recording. She shows them recording in which in dark a man like arjun comes. She says I am sorry for not trusting you all. I am forgetting things. Akash says don’t worry. Bini says everything will be fine. Jia says I am forgetting things. I will try to fix all this. I will make breakfast for you all. Bini says great. She leaves.
Akash says what is this? Bini says how did she see arjun? Nisha says I brought in a guy like Arjun and asked him to dress like arjun. Akash says only you can play such things. She gave clothes to Krishna. Bini says I texted Jia that arjun wont come. Find her phone and delete it. She finds her phone and deletes it. Jia comes in and says what should be in breakfast? where is my phone? She looks around? Bini deletes and places it on bed.. Jia says food will be ready in 15 minutes.
Akash says to Nisha you brought in arjun’s duplicated without telling us? We dont trust you. She says I know but everyone was stressed. Her foot bleeds. Akash says what happeend to your foot? She says just got some bruise. Akash leaves.