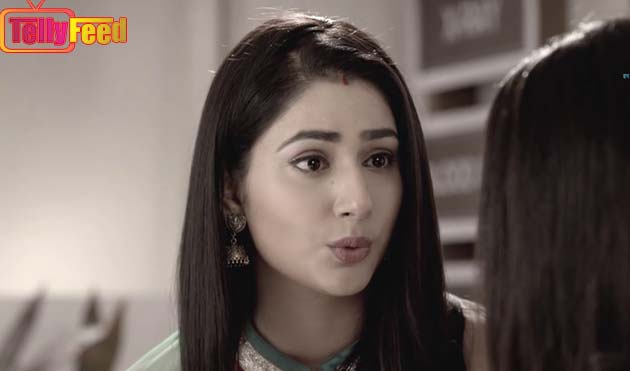 JIa leaves a newspaper which has Sinha’s photo. It says the terrorist ran from our custody years ago. Anyone who brings him to police will win big prize. Rano sees the paper and gets excited.
Ambika comes and syas Akash what are you doing here? What are you two planning together? Rano comes in and says I have a surprise for you all. Police comes in with a dead body. Inspector says he was a terrorist who got killed in an encounter. Ambika takes of sheet from his face. she sits down and screams. Akash says papa.. Ambika screams and cries. Jia is in tears. Rano says let me tell arjun. He is son of this house. Akash shoves her and says we will tell him when we want. Go away from here.

Ambika says to Jia go away from me. She says ma.. ambika says you killed my husband. You are nothing for me, don’t call me ma. You took everything from me. I asked you not to do anything. I told you akash not to do anything but you didn’t listen. she cries and says I have nothing. Inspector says we have to take the body. AMbika says akash stop them please. Please don’t take him, police takes his body. Ambika screams and says please stop. Akash please stop them. Akash hugs her. She cries and sobs. Jia is in tears too. Ambika says everything is over.
Jia says I am responsible for all this. She sobs. Jia says I put that ad in Rano’s paper only then how was police looking for baba? She runs out and sees the van taking baba. She puts needles in their way so their car stops. Jia gets in the ambulance. She sees the dead body.. She takes off sheet.

Rano is asleep inside. Rano says surprise and laughs. What happened? Are you shocked to see me? Jia says where is baba? He is alive right? Rano says yes he is. I gave him injection so he was cold for an hour. I did that drama. HE is alive. she laughs and says you are so stupid. He acts like a sardar really well. You thought I am so stupid that I can be fooled. arjun wont have allowed you because he knows how intelligent am I. Jia says why did you do this. She says I like seeing Ambika in pain. What if she had a heart attack and died. Jia slaps her. Rano says you can’t slap me. I can kill baba anytime I want. She leaves. Jia says Rano is playing with everyone.

Thank God baba is alive. Ambika is crying in the temple. Akash tries to console her. AMbika says I wish I could save my husband. I didn’t even try. I did nothing for him. Akash says ma it was not your mistake. Jia has gone to find out truth. she says don’t take her name in front of me. This all happened because of her. And you were with her in all this. Go from here and leave me alone. She says I was alone all these years but I kept all this mangalsutra and sindur. she removes her sindur but Jia holds her hand. Jia says your husband is alive am. Ambika is dazed. Jia says Rano told me he is alive. Ambika says is he? She says yes it was all Rano’s drama to give you pain. Forgive me ma. I know you asked me not to do anything. I wont do anything now. We will do what you want. My only intention was to bring baba to you. Ambika puts her hand on her head.

Someone puts a sheet on her. She screams and shouts. Everyone comes downstairs. She says there was a ghost here. She runs. Jia says are you crazy no one was here. she runs out.

Jia laughs. Ambika says to Jia you did all this? She says not me alone. Bini and akash come out. ambikaa says when did you two come? jia says akash was scaring her. Bini hug that rope on the fan. Akash says I wanted to scare her more but Jia stopped us. jia says lets loook for baba now. Bell rings. Jia says you two hide. she opens the door. A baba is there. Jia says who are you? He says I will kick the ghost out of here. Jia says stop.. the baba enters the house. Rano says he came with me. He will kick the ghost out of this house.

Rano says bab please help me. He says don’t worry I will do it easily. He looks around everywhere. he says who asked the ghost to come here? Someone invited the phantom here. She called him. Rano says Jia called the ghost. Rano says what should we do? Baba says we have to hit the ghost called 100 times with rod. Rano says yes. He tries to hit Jia. Jia says stop. She takes his rod and says I will hit you. How dare you get out of this house. The baba says I am sorry. he runs out. Jiaa says there was no ghost here. You people trust anything.
Rano says I know the ghost is here and very close to you. She takes off curtain from Akash and Bini. She says here are your ghosts. You all put in so much effort. Then mai there should be some present. She says you have to take 56 steps. Jia says ma and Akahs look everywhere in the house.

She plays music and dances. Bini says I so want to hit her. Rano dances. Bini hides behind the sofa. Rano takes her phone and says trying to act smart? Jia comes to a room and says rano was fooling.
Rano puts knife of Bini’s neck. she says how dare you go against me. Bini shoves her.
She calls Akash. Bini says save me akash. Jia throws her phone away. She says come with me. Bini shouts please save me. Akash says she was hidden in the hall. Rano locks Bini in the room.
Jia and Akaash look for Bini. Bini hits Rano on head with a vase and tries to run. Rano shoves her. Bini’s head hits the wall and she faints. She ropes her.