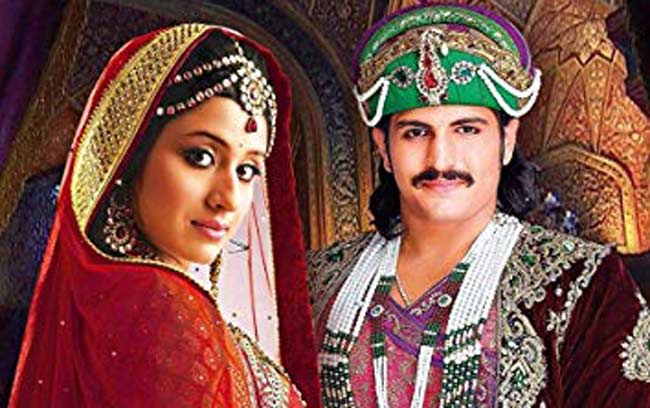 All are waiting fro Leela in Jodha’s room, Laboni comes there, Jodha ask did you go in my room at night? Laboni says yes, Jodha says i got to know that you removed Kahna’ idol?

Laboni says yes i did, Jodha says dont yo know how important that idol is for me, Laboni says i saw Idol had dent and its not allowed to do pooja of defected idol, Jodha says i did pooja in night only and there was defect on it, Laboni is stunned, she says why would i lie to you? why would i remove idol? you dont trust me? come with me, i will show you.

All comes in Laboni’s room, she shows them idol and ask her to see idol’s hand, there is defect, tell me what was my mistake? i should have told you but if you do pooja of defected idol then you will be in problem, did i do anything wrong? Jalal ask what she is sayiin? Jdha says she is right, i cant do pooja of defected idol, she says sorry i didnt know truth Leela, you dont know how important this idol is for me, Laboni says i should have informed you, Jalal ask Moti to send this idol to seller, he will make same like this one, Laboni says i know you are sad Jodha, Jodha says idol can get defect but my love for Kahna will ot change, Laboni thinks that now till when you return, everything will be changed here, i would get Jalal by then.

Jodha comes in Jalal;s room and ask dasies to take wine from here, she asys to Jalal that you have started drinking wine alot, dasi comes and says english ambassadors have come to meet you, Jalal and Jodha goes to meet them, ambassador says to Jalal that england’s queen have sent gift for Jodha, Jalal thanks him, Jodha accepts the gift, its ball gown, Jodha says to Jalal that we should gift back, Jalal says yes but i wanna know about this dress which they gifted to you, ambassador says this dress is worn when king and queen go for ball dance, Jalal ask about ball dance? he says this dance is for couples, Jalal ask can i learn this dance? ambassador says yes, he makes Jalal learn couple dance, Jalal thanks him, ambassador leaves, Jalal says to Jodha that i found dance interesting, he says to Jodha that i like this dress, can you wear it, Jodha sys how can i, Jalal says wear it once, Johda goes and comesback wearing ball gown, Jalal looks at her, he is mesmerized.

Jalal is mesmerized with Jodha, Jodha shyly smiles, Jalal sees her from top to toe, she says now you saw me, i am changing clothes, Jalal says complete the reason for what you have worn this, lets have dance which eglish man was talking about, Jodha says i cant do all this, she is about to leave, Jalal pulls her closer, he puts her hand in his hand, puts her other on his shoulder and have couple dance with her, Jalal step over her dress, she laughs, they dance, Meri dhadkan tum ho.. tum hi do jahan ho.. plays, Jalal and Jodha share eyeloc. otherside Laboni does magic on beads. Jalal feels jittery, he looks at Jodha and says you disrespecting lady, arent you ashamed of wearing dress like this? he throws her away, Jodha falls on ground, Jodha ask what happened to you? Jalal lies on bed and says i dont know, i just wannt take rest, Jodha finds beads in his room, she says these are weird beads. because of Jodha touching beads, Laboni’s magic breaks, she ask Dammo what happened? Dammo says seems like someone have taken beads, if we dont take beads back then our magic will fall us only, Laboni runs to take beads. 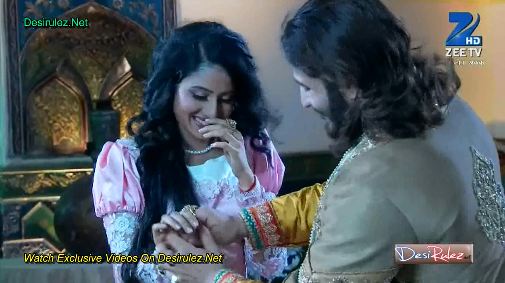 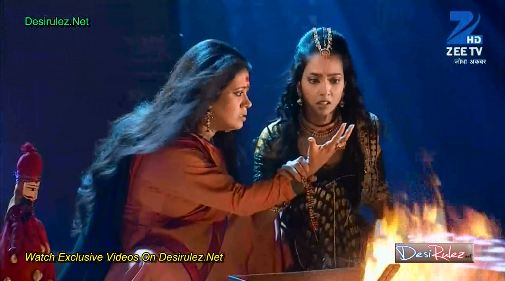 Ruks calls Hoshiyar, he is afraid, Dammo sees him hiding, Ruks says to Hoshiyar that select a dress for me, she ask which will suite me, Hoshiyar says white will be like your white hairs and if you wear yellow, it will darken, whatever you will wear will not look good on you, you are crow and will remain black, Ruks beats him.

Jodha shows beads to Moti and says dont know how they came here, these are weird beads, Laboni comes there and thinks that this Jodha always come in my way, she ask Jodha whats in your hand? Jodha says i got it from Jalal’s room, Laboni says these beads were attached to statue with which Aram was playing, Jodha says oh i see, Laboni says i will stitch it back to statue, give it to me, Jodha gives her, Laboni leaves. 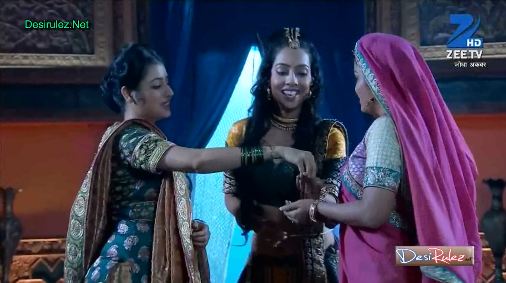 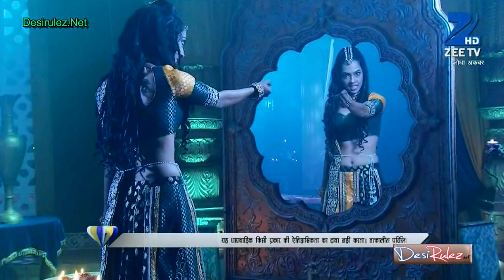 Jodha comes to Jalal and ask him to take rest, he is not fine, she ask him to drink syrup, he says i cant drink it, Jalal says whatever you wear, you look beautiful in it, Jodha says your tricks will not work, you have gulp this down and take rest, Jodha closes his nose and makes him drink it, Jalal says this is very bitter, Jodha says i thought you like everything from my hand, Jalal says i like you, he says you were looking very pretty in english dress, i just want you to wear it in some function, Jodha says you started naughtiness again, Dasi cmes and informs Jalal that some secret agent of Mewar has been arrested. 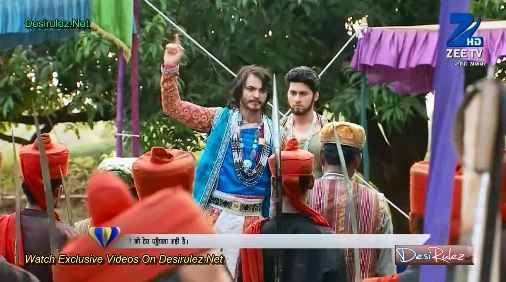 Scene 3
agent tej is presented in court, Salim says he is agent of Maharana Pratap, he came to palace, Jalal says you are our enemy and we dont leave but if you do our work then i can leave you, tej says you wanna find Pratap but you will never find him, Jalal says i will give you place in palace, tej tej says i am not disloyal, Birbal says if you want to be alive then tell about Pratap,tej says i am common Rajvanshi who loves his land, i can never betray my land, Jalal killed women and kids when he attacked Mewar earlier, now its time to take revenge.

Pratap gets to know about his agent’s arrest. Jalal says to tej that you have 2 option, either tell about Pratap and get place in palace or get beheaded right now.
Pratap’s minister ask him to leave the place as Tej can tell about him to Jalal.

Jalal says to Tej that great, i loved your spirit, he ask soldier to release him, Tej says you wanna release me so that i can go to Pratap and you will follow me, i am going to kill myself, he eats poison and is dead, Jalal is shocked. Jalal ask Birbal that he maybe my enemy but was loyal to his master, do his last ceremonies with respect, deadbody is taken from there, Jalal ask Salim about war? Salim says we are ready, Jalal says then go on war from tomorrow, he says Pratap should not run away, Jalal coughs, Salim gets worried and gives water to Jalal, he ask Jalal what happened? you dont seem fine, Jalal says i am not tired, nothing else, Salim says you seem weak, Jalal says i have strong son like you, i am sure you will bring Pratap alive or dead infront of me.

Laboni is worried all their efforts are wasted and Dammo says someone is coming in between and Laboni says its Jodha who is making all her efforts nullified and they plan to separate JAJO and plan to take SH out of the palace.
Jajo are together and she says Salim said you were ill in the DEK and SH so what now you are with me we are together and she says we are always together and she asks him to stop talking and take rest and he starts gesturing and he romances with gestures she can’t understand and then asks him to talk and they have a small romantic tiff then she asks him to sleep and she stays with him their song in the BG as she softly keeps patting his head and SH is then sleep after he sleeps she leaves him and keeps looking at him goes and goes .
JB and MB are together and she is worried about SH as he is behaving strangely with her MB says he is busy worried about the war and also drinking a lot so behaving strangely . Just then one old women comes and begs the guards ask her to go but then JB calls her in and puts her shawl on her and she asks MB to get her food. The woman says TC of yourself as who is good should have to beware of bad and evilwhich she feels in the palace she says I get a bad vibes about this place and someone has come here to steal something very close and dear of yours. She says there are bad witches who have put an evil and bad spell /power over this place and asks her to keep your family and house safe and protect it from them.

She blesses her and again warns she feels the bad power and to protect yourself from it.
SH gets up and looks at his crown and picks it up and wears it he feels strange takes his sword and goes after getting ready like a man possessed.. He looks down and finds JB there.He goes down and asks her why she is there at night and she says she is stifled in the palace and wants to go out of the palace without guards and both go he asks why she has brought her here to this lonely place and she says she wants to be with him always and not be far from him and he says she is in his heart She says and in the palace all disturb them and SH agrees . Just then there is howl of dogs and she acts afraid and SH hugs her and precap scene and she turns Laboni.

Dammo has made the gem magical and has power on SH and Laboni’s face will appear like JB’s face and then shows how she looks like JB once the gem is placed near her picture. And this will have effect for very less time and she should come back before the gem loses its effect and all this is shown in FB how she changes the gem in SH’s crown. SH sees JB instead of Laboni.

Meanwhile in the palace JB goes to SH room and JB is searching for SH she goes and thinks where can SH be at this time and at the lonely place Laboni says in palace all disturb and so I want to be alone with her.JB goes to Leela but she is not there and Dammo says she is bathing and hides the doll .JB says if she has seen SH then tell her to come and immediately meet me and she goes. But as Dammo turns the doll falls down and all beads break and there the crown/pagdi of SH falls and the gems breaks the magic spell breaks and Laboni remembers her mother saying that she should be careful that the pagdi is not removed. SH wears it and looks at Laboni in a odd manner.