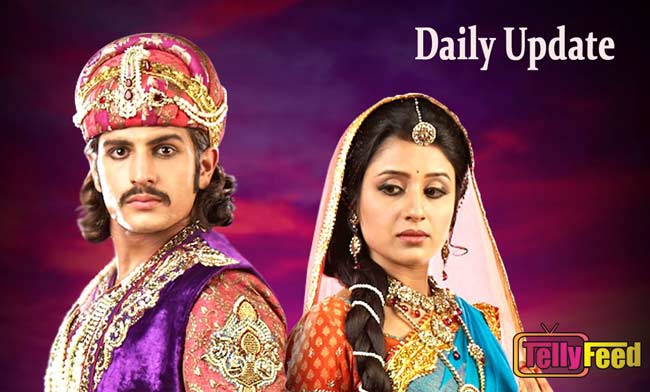 jalal is sleeping in his tent when somebody kills his soldiers, they are four to five people and surrounds his tent jalal gets up with a start and picks his sword. They attack his tent with arrows pir comes in jalal says sujaanpur people attacked on us, pir says i think amer people informed them about your tent otherwise how do they know jalal says will think later now we have to answer them back first, pir agrees.

Jalal comes out of his tent and sees most of the soldiers are killed, sujanpur force come there and attack jalal’s soldiers. They surround jalal he is alone as they capture pir also they are bulk jalal looks at them with anger, some soldier says you have no way out jalal, jodha’s brothers attack them with arrows jalal is stunned and start fighting, brother kills most of them. They all fights against sujanpur force for quite sometime and Jalal displays all the war tactics, he gets surrounded by some dacoits when the four brothers come to his rescue and save him. But BDas gets hurt(arrow pierced) in order to save Jalal, Jalal removes the arrow and asks why did he do that, BDas says because he is his brother in law and king and it was his duty to save him. The chief minister comes and informs Jalal that Sujjanpur army has attacked and we are not even prepared, Jalal says , still we will WIN the war.

Jalal gets ready in his war gear, again the fight ensue, lots of bloodshed, Jalal gets hurt , wants to have water but continues fighting but gets tired, BDas offers him water,Jalal recalls FB of how he treated Jodha’s brothers in Agra. The Mughals take Ratan Singh as traitor to mughals and as per orders from Jalal, they kill him.

Jalal returns to Agra which took him 2 days and he was caught between Amer’s treachery at Miscarriage issue or BDas loyality during war.

Ruks-Hoshiyar are eagerly waiting for Jalal and arranging for the celebration of his arrival.Adham tells Maham that Jalal just won over some dacaoits, he should be the real king. Maham tells him to come for Jalal’s reception.

jodha sadly says for a wife her own husband arrest her is too much insult, i profusely said that i didnt do anything but for everything is a game my respect my dignity today ruks said that culprit is someone else so you changed and justice has also become a game for you, yeah i lied that i killed your child because i thought you would kill me but other innocents would be saved, i pain of death is less then the pain of being your wife, i hate you so much thats why i lied also, i want to curse you but my values says that i cant curse my husband, but i pray to get free from you and your evil mind its better to die then living in this hell but ruks didnt give me that chance also, she folds her hands and says i request you to please go from here, he doesnt budge so she sternly says go he gives a angry look to her and leaves. Jodha looks up at him and sadly sit on bed.

ruks ask knowing you dont love her, she hates you then why you did nikkah with her jalal says because not getting her was my insult i wanted to show her as my victory, wanted to crush her arrogance under my feet, her hatred gives me peace but i didnt know she will behave like this with me. Ruks says i have one idea send her back to amer, he says still she is not proved innocent so how can i send her ruks says but i think she is innocent, behind any crime there is some reason she has no interest in your kingdom nor does she want power, she is not interested in your wealth she is not even interested in you jalal feels hurt a little and tries to leave when she stops him and says do some action against salima asap, either she proves her stance about that box or accept her crime. Jalal says i will do same but dont let anybody know about it.

at night jalal thinks what is happening, jodha’s brother saved my life and i on a doubt kept them under arrest, now doubt is on salima, after khan baba i gave her respect, gave rahim everything then why will she do anything like this? I am mistaken this time too. Prime minister comes in and jalal says i wanted your opinion as after khan baba you are assisting me he ask what you want to share, jalal says i got some proof which says jodha is innocent then what should i do because dont want to do injustice , PM says you have already done injustice as you have kept innocent person under house arrest,he also says it is not known when culprit will be caught but you should free jodha and brothers from house arrest soon as it is wrong for mughal kingdom if innocent is captured, jalal says and what to do with real culprit? he says you have doubt on that person till you have some solid proof against that person you should not take any action jalal thanks him for the genuine advice he says anytime.

jalal and all are present in court jalal says nice you are here and thanks hamida for thinking about mughals justice, amer princes ws not able to get any proof in 10 days to prove their innocence but I have got some proof which shows they are innocent so I order to free them from arrest with all respect and I appreciate that under they gone in war with me and das saved my life so I am making him minister of some state and till real culprit is caught you people will be our guests maan says I will with them jalal says no take your position back and stand with me maan goes and sits with him jalal says to jodha that you can shift to original room, tension between them is visible as they gives angry looks to each other and jodha leaves.

Maham and her daughter in law,Javeda have a nok- jhok moment, Javeda is irritating Maham with her childish talks and also praises Jodha which gets Maham very hyper and angry. Maham finally gets exasperated and asks her to make sweets , Resham comes and informs that Jodha is now free and Maham gets a shock and wonders what Jalal is upto.

Jodha is elated to know that Hameeda did pooja for the past 10 days moti says because of her jalal gave you 10days time jodha says dont talk about him moti says why now? he announced your freedom jodha says on a small doubt he made me and my brothers culprit without any proof she is still is miffed with Jalal. Hameeda comes jodha greets her and says I was about to come hamida says you asked for anything for 1st time so I ahd to fulfill your wish and asks why she was not happy when Jalal pronounced her not guilty, Jodha tells that she is angry with his attitude, I am not happy I am very much angry the way he treated me has given much pain to me and if you are feeling bad with my words so I am ready to be scolded but he treated my family in way too rude manner.

Hameeda tries to pacify her says I know he was wrong that is why I stood uo against his order and asked for 10days for you, He lost his child I understand his pain but I understand your pain as your sister would be husband got killed in all this, your anger on him is upright you have the right and he has to understand your anger as insulting someone or play with someone’s respect is not right ans says if you have any complain against him just tell me jodha says why jalal lacks your good qualities he is your son she says it is my fault i was not here one time of his upbringing jodha says not your fault but his bad fate that he didnt get your upbringing, hamida blesses her and both share a nice moment.

Jalal again in one of his night walk, recalls Ruks showing him the evidence, his nikaah with Salima , moments with Rahim. He comes in Salima’s room, she is surprised to see him, he tells her its his right as a husband and asks her to help him in removing his clothes. Salima is hesitant, he removes her dupatta from her head and gets closer to her and Salima is very uncomfortable.