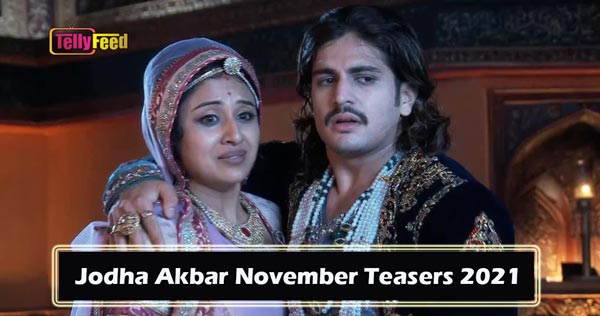 Jalal is shocked and angry to see Jodha with a new religion (Islam). Below are Jodha Akbar November 2021 Teasers:

Haidar’s uncle starts to ignite hatred between Murad and Salim. Jodha goes to meet Jalal and tells him her decision to give up her religion. Will Jalal accept ? Jalal summons Salim and Murad to court.

Jodha feels that Jalal’s decision might create a big rift between the brothers. Later, Rukaiya brainwash Salim. Jalal meets with some British officials. Hamida persuade the brothers to participate in the upcoming game.

After killing Moin Khan, Jalal declares a big war on Iran. Hamida tries to talk Jalal out of this. Hamida makes a shocking request to Jodha. For the sake of peace, Jodha agrees to convert to Islam.

However, she changes her mind at the last minute. The news of Jodha and Hamida’s rift spreads like wildfire. Salim and Jodha perform Hindu prayers, which angers Rukaiya.

Hamida has a negative change of attitude towards Jodha.

Salim reads out Jodha’s love letter to Jalal while Rukaiya promises to widen the differences between Hamida and Jodha. Mughal and Iran war starts. Later, Birbal informs Jodha about the wrong steps Hamida has been taking.

Jalal extends a hand of friendship to King Kurb. Meanwhile, Hamida’s health begin to deteriorate. Jalal hears a lady crying for help in the jungle. For the sake of Hamida, Jodha decides to break her promise to Jalal. Elsewhere, Laboni hands over Jalal’s blood to her mother.

Jalal is shocked and angry to see Jodha with a new religion (Islam). Jalal and his army return to the palace but his anger does not subside. Jalal states his decision to divorce Jodha while Jodha is determined to not leave her husband.

Anarkali confesses her love for Salim. Salim questions Jalal as to why he wants to divorce Jodha. Jalal and Jodha put an end to their drama. They reunite as a happy couple. Salim is crowned the new future king.

On the other hand, Laboni and Daamu perform their black magic to trap Jalal. Laboni ambush Jodha’s sister (Leela) on her way to Agra. She disguises as Leela and makes her way to the palace. Later, Salim and Anarkali come close.

Dear Readers, Kindly note that what you are about to read below is the raw, unfiltered version of Jodha Akbar for November. Zeeworld skip these scenes for reasons best known to them. We decided not to copy the channel and give our readers the full teasers.

Aram enters Daamu’s room by mistake and carries Jalal’s statue. Laboni spikes the food Jodha made with much chillies. Daamu’s black magic hits Jalal hard this time, making him get romantic with Laboni.

Jalal is mesmerized upon seeing Jodha in an English dress. Laboni manages to recover her beads. One of Pratap’s loyalist, Tej is arrested and brought before Jalal.

Laboni impersonates Jodha and takes Jalal to a lonely place. Everyone blesses Salim as he leaves to fight with Pratap. Jodha informs Laboni about her fiance, Sangram Singh coming soon for their marriage.

Daamu warns Laboni not to show her face to Sangram until the next night. Daamu’s magic work on Sangram. He recognizes Laboni to be Leela. Will their secret ever be exposed?

Jalal states that another meena bazaar is going to take place. Jodha gets shocked when Jalal passes by her stall and goes to Laboni’s stall instead. Under the influence of black magic, Jalal lambasts Rukaiya and Jodha.

Jodha visits Yoginath the magician to seek help regarding Jalal’s case. Yogi reveals the whole truth about Laboni to Jodha. He gives her a sacred thread and asks her to be careful.

Jodha follows Jalal when he becomes influenced by Laboni. To calm him down, Jodha takes him to the royal tub and bathes with him. Dammu and Laboni try to get rid of the sacred thread. Rahim saves Salim from getting killed by Murad’s soldier.

Laboni asks Jodha to leave the palace if she wants Jalal to remain alive. The Priest gives Yogi a dagger that will destroy Laboni. Jodha exits the palace by using prayers as an excuse.

Yogi and Jodha bravely take on Laboni and Dammu in the jungle. Who will come out victorious? As always, Jodha manages to save her husband from the evil one clutches.

At the temple, Laboni apologizes to Jodha and claim to have repented. Jalal and Jodha remarry once again. However, a new problem shows up when Jodha keeps seeing Laboni spirit everywhere.

Laboni spirit torments and dominates Jodha’s body. Will anyone notice the change in Jodha’s behavior?

Laboni (Jodha) turn the tables on Rukaiya. Fazal and Rahim get hold of Shabab. Later, Jodha embarass herself in front of the England guests. Laboni overpowers Gul rung when she tries to get rid of her spirit from Jodha’s body.

Uday’s mantras leads Jodha out of the palace. She heads to the jungle. Before dying, Uday warns Jalal to protect Jodha from Laboni.

An helpless Jalal plays dumb with Laboni. Shaguni pretends to visit Jodha. Shaguni and Jalal team up against Laboni. Will their plan work out?

Anarkali is given a difficult task by the queens. As per Shaguni’s plan, Rahim and Salim enter the palace with Jalal’s dead body.

Jalal, Jodha and Shaguni finally get rid of Laboni for good. Jalal announce the marriage date for Salim and Mann bai. Salim objects and reveals the love between him and Anarkali to Jodha.