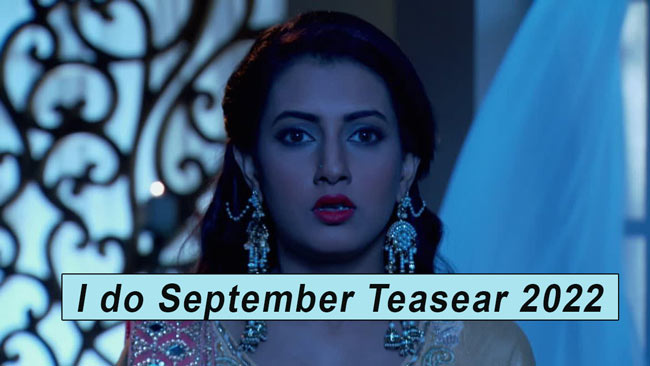 I Do September Teasers 2022

Shaad proves that Sanam loves Aahil more. He also vows to help Sanam remember her past love life with Aahil. Coming up on ZeeWorld I Do September 2022 Teasers:

ZeeWorld I Do September 2022 Teasers

Aahil learns that the car brakes have failed. Jannat regains her memory after the accident. Thereafter, Sanam faints again, and Aahil splashes water on her face. Aahil gets shocked to see Jannat losing her memory yet again.

Aahil convinces the tribal people to kill him and let Jannat go. Nayi Sanam informs Shaad that Aahil and Jannat have met with an accident. Nazia weeps after learning about Aahil’s death.

Jannat rushes to Shaad and hugs him while Aahil breaks down to see them together. Shashi devises a new plan to kill Aahil. Further, she ignores Juda’s call, and he gets offended. Later, Nayi Sanam tries to bring Shaad and Jannat closer.

Shaad notices Sir Juda’s call on Shashi’s mobile. Nayi Sanam insists Jannat wear a modern dress. Later, Sir Juda decides to go to Shashi’s party while Shaad is on a lookout for him.

Aahil tells Shaad that Jannat is Sanam. Hence, Shaad decides to tell Jannat the truth. A man comes to Aahil’s house, whom Jannat suspects to be the caller, who had threatened her. Shaad proves that Sanam loves Aahil more. He also vows to help Sanam remember her past love life with Aahil.

Later, Nayi Sanam makes Sanam sick by using her black magic skills. Aahil prays for a miracle to God to help him get out of the room and tend to Sanam. A stole comes flying and lands on him, and he finally gets out of the room to help Sanam.

Noor gains Nazia’s trust. Shaad convinces Sanam to attend the Quran recitation that Aahil is holding. When Noor sees Saif with his girlfriend, she beats him to solidify Nazia’s trust in her.

Meanwhile, the reporters inform Mersaab that the police have found the explosives. Nazia is reluctant to marry Saif, but they get married anyway.

Shaad lets Aahil take his place to get him married to Sanam. Nayi Sanam shows Shaad pictures of him and Sanam in intimate positions. Shaad promises Aahil that he will unite him with Sanam.

Nayi Sanam vows not to let Aahil get the injection, which he has ordered for Sanam. Jannat decides to return to Pakistan with Shaad as she feels uncomfortable in Aahil’s presence. Later, a look-alike of Shaad shoots down a few men.

Nayi Sanam addresses Shaad as Murtaza. Aahil is outside a mosque, and he spots Murtaza entering a bar. Later, Aahil is concerned that Sanam might be distressed about Shaad’s condition.

Sanam feels uncomfortable about her feelings for Aahil. After Shaad reveals himself, he gets into a scuffle with Murtaza. Later, Shashi threatens Sanam.

Sanam is confused to see Shaad following Murtaza. Murtaza throws Sanam and Aahil off the cliff. Further, Razia tells Nayi Sanam and Shashi that their goal is still incomplete.

Jannat returns home and makes a shocking revelation as Nayi Sanam tries to stab her. Sanam recalls her lost memories and blames Nayi Sanam for her losses. She is resolute to wreak vengeance on all her wrongdoers. Later, Nayi Sanam falls prey to Sanam’s laid trap.

Sanam manages to enter Shashi’s house and eavesdrops on Shashi and Saif’s conversation. Razia sedates Shaad as he tries to give Sanam a letter.

Shashi manages to escape from her house, but Saif dies in the blast. Shashi is determined to kill Shaad. However, Shaad gets hold of Shashi’s mobile and calls up the Pakistani intelligence.

A video recording reveals Shashi’s plot to create a bomb blast. Although Shashi accepts her deeds, her aides detain Sanam, who vows to avenge Aahil’s death. Sanam sets out to find Shaad and give him justice. Nayi Sanam fears being killed by Sanam.

After marrying Nasir, Nayi Sanam is known as Khan Begum, and she swears to recoup all that she has lost. When Nasir insults Khan Begum, Azaad warns Nasir against it.

Saira and Bano introduce Mahira as their sister to a shocked Khan Begum. Further, on seeing Azaad, a Pir Baba foretells that Mahira will find her true love at the ‘Haveli’. Mahira apologises to Azaad, who pardons her but asks her to stay out of his way. Later, Mahira tells Azaad that she is not afraid of him.

Akram accidentally plays a video, which proves his misdeeds. Amaad apologises to Mahira and asks her for a date. Further, Azaad and Mahira look for ‘neeli kachnar’ that contains magical properties. Azaad is hungry for more blood.

The ‘neeli kachnar’ catches fire, and Khan begum fails to regain her powers. Mahira learns about vampires from her father’s books. The police question Azaad about his whereabouts, and he lies to them.

When Mahira gets ready for her date, Saira and Bano try to injure her. Azaad behaves rudely with Mahira and dismisses her. Amaad tries to turn Mahira against Azaad by lying about him. Razia tries her best to reveal the identity of the girl with the mark to Khan Begum. However, Azaad inadvertently hinders this process when he prevents Mahira from falling.

Amaad flirts with Mahira to annoy Azaad. Mahira annoys Azaad at the party in her attempts to know his weight and eye colour. Later, Khan Begum gags Nisha and takes her to her room, then tries to drown her.

Mahira falls and loses her spectacles, which allows Khan Begum to hide the body. Khan Begum stabs herself with an evil knife, and her spirit looks for the girl with the mark. Later, a woman reads the Holy Quran, and Khan Begum’s spirit is ousted from the house.

Mahira accidentally falls into the dickey of Azaad’s car, and he heads towards the farmhouse. Mahira teases Azaad, saying that he cares for her. Meanwhile, Razia performs occult rites in Khan Begum’s house.

When a group of men tries to rape Mahira, she runs away and asks an unconscious Azaad for help. Razia hurls a powdery substance into Mahira’s face, and she loses consciousness. Khan Begum takes out her dagger and chants magical spell to kill Mahira, but she fails to succeed.

Razia gives a pouch to Jhanjhariya to scare Mahira. The enchanted blood tries to drown Mahira. However, the amulet falls in the water, and Mahira is saved. Thereafter, Khan Begum gets furious as her plan has backfired.