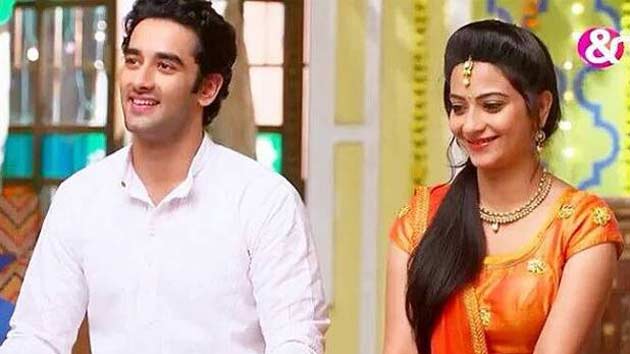 Prabha points the gun towards Madhvi to send her to Niranjan. Prabha then orders the goons to give each, Sagar, Ganga and Amma ji a paper. She asks them to write the name of one they love the most. Ganga demands what it is. Sagar throws the paper down on floor.

Prabha points the gun towards Ganga, forcing Sagar to write. Everyone was upset, Prabha watches both Sagar and Ganga write the names. Prabha informs Sagar it’s not his name, but Krishna. She orders to open her ropes, and calls her for a game. She hands her the gun and says if she doesn’t shoot Sagar, she herself would shoot Krishna otherwise. Ganga gets hold of the gun. Prabha urges her to shoot. Ganga was taken aback at the noise of gun shots. They were all shocked to see Prabha left open eyed, then falling off. Niru stood behind her with the

gun. The police runs inside, fetching the goons. Aabha comes in with the inspector. Amma ji runs towards Niru, kissing over his face. Everyone was in a shock. Niru assures everyone about being fine. Aabha says this woman and her son betrayed her, she followed them and called the police here as well. Sagar thanks Aabha. Amma ji wonders what kind of a joke was it. They all leave for house.

The next morning, the family sat together in the lounge over tea. Madhvi questions Sagar why they mocked Niru’s death. Sagar says he and Ganga were concerned that those with Yash could attack Niru again. They thought about faking Niru’s death, this would get them sometime to reach their enemy. He then called the police. Ganga says they had planned to reach that old house; but Prabha was really cunning. Niru boasts about being the actual hero. Amma ji suggests about arranging a party with neighbours. Kashish and Maharaj ji arrive. Pulkit takes her bag, and confirms if there was some problem during the travel. Has she eaten something? Ganga was worried to cook. Amma ji takes her along to teach her cook on mud stoves.
Ganga was in kitchen with Amma ji. Madhvi had come to ask Amma ji for keys. Ganga sat in her place, kneading the flour. Her hair strands teased her, when Sagar came to pin them behind her ears. They kneaded together. Before leaving, Sagar confirmed if she was uncomfortable; it was just by chance. He still remember this marriage is a show off for Niranjan, they will continue doing this. Niranjan heard this from the door.

Niru was worried and shares the fake relationship matter of Sagar and Ganga with Amma ji and Madhvi. He says they should take some step in the get together tonight. In the room, it was dark and Ganga and Krishna played with shadows. Sagar comes inside. Ganga turns the lights on.

Sagar brings a gift for Krishna. She cheers and unwraps the gift. She cheers and gets the writing pad to Ganga. Sagar says if she has something in mind, she can write over it to communicate. Krishna hugs him and goes outside. Ganga was lost in her thoughts and comes to remove her bangles. The sindoor box slips from the dressing table, Sagar hurries to catch it. He says she doesn’t need to put this sindoor to show off; he is moving to London and she would be able to live in peace. Both will get rid of each other. He has to return

to join his job again. Ganga holds his arms, saying this wedding isn’t a lie; this relation isn’t fake. This is her need, she loves him and can’t live without him. She breaks from day-dreaming; Sagar leaves smiling.
Kashish peeks through the door, as Supriya and Pulkit were getting ready. Supriya felt something missing with his preparation, then goes to get a scarf for his dress. Pulkit compliments Supriya. Kashish heads to come inside but her head bangs. Pulkit and Supriya hurry towards her, Kashish asks for water. She then apologizes Pulkit for ruining their party, and allows them to leave. She shares with Pulkit that she feels their child, and places his hand over her belly for him to feel. She understands whatever was between them was only past, but their child reminds her of love they shared. Supriya arrives with a glass of water, and was concerned about her. Ganga had heard the conversation between Kashish and Pulkit..

In the party, Krishna writes instructions for games on her writing pad. Ganga takes Kashish aside to speak to her. Kashish accepts in front of Ganga that she couldn’t control her emotions, but would take care afterwards. They return to hall. The children now demands the elders to participate. Niru announces to begin with the newest couple for dance, Ganga and Sagar. Ganga denies, but the kids drag them to the centre. Krishna writes Please on her writing pad. They finally reach the centre of the hall. Sagar holds Ganga’s hands saying may be its their last dance, after that he would go to London and she would be here. They dance with each other. Everyone cheer in appreciation. Niru stops them from leaving and wanted to take an opportunity they both think about their selves as well. He hands them honeymoon tickets, saying they are leaving for Switzerland on 16th January. Ganga sat outside with the fire, lost in her thoughts. A fire flake gets into her eye, Sagar comes to blow it out. Ganga at once stands up and annoyingly tells him to go to London, she can take care of herself. Sagar murmurs aloud she is really stubborn, but he would make her confess her love. He asks what they should do to these honeymoon tickets, actually he has to go to London on 16th. This wedding decision was hers, and she should decide what to say to the family. He leaves handing the tickets to Ganga, he turns thinking this time she must stop him from going to London