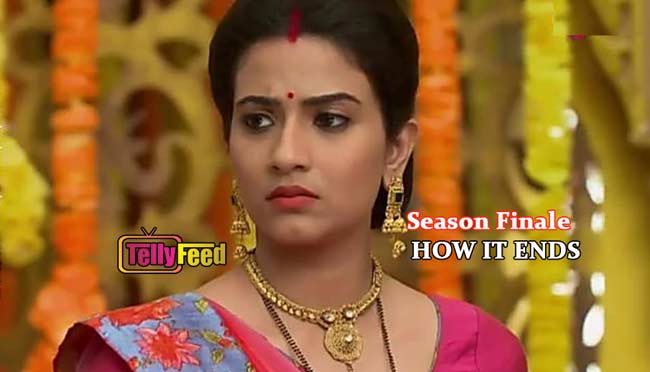 Riya watches Aasha wearing Ganga’s jewelry. She was happy thinking Aasha must have to remove this jewelry. Savitri asks about Shiv, Riya says he would be home till evening.
Riya was trying to call Shiv. Jhumki comes to her with a letter. Ganga reads the letter and thinks about meeting this man. She wonders what if Shiv returns home before and decides to meet the well-wisher as he thanked her before. She reads the place of their meeting mentioned in the letter.

Jhumki comes to Ganga’s room behind her. She recalls Pratab told her to burn the letter after Ganga has read it, Shiv must never find out the letter wasn’t the one he wrote.
Shiv and Pratab were waiting near the forest. Shiv tells Pratab that Ganga would never take any wrong step. She will never decide to run with a stranger.

Pratab insists on him to wait for a while. Ganga appears from the front. Shiv was shocked to see her. Both go to hiding behind the ruins, Ganga wait for her well-wisher there, she then decides to return home as it’s time for Shiv’s return. She writes a letter there, she wanted to meet him as he has helped her a lot but now she can wait no more, she must go to meet her husband who loves her a lot. She tucks the letter on a tree and leaves the forest, running towards home with a smile.
Ganga comes home. Shiv comes there and says he wants to speak to Ganga first. He wanted to give these property papers to Ganga at another occasion, but it’s alright. He hands her the school property papers and allow her to start a new life. He frees her from any bond with him. Savitri was relieved. Jhumki and Pratab smirk while Riya and Kushal were upset. Shiv tells Savitri this is his decision, he is ready to marry any girl of her choice and this time it will be a true marriage. Shiv says he has taken this decision thoughtfully. Ganga never accepted this relation, it’s his mistake to force her stay with him. Savitri asks Shiv if he is ready to marry Aasha. Riya tells Ganga there must be a misunderstanding. Savitri asks Riya if she is worried about Radhika. Radhika will be most loved by her real aunt, Aasha. Shiv asks Aasha if she is ready to marry him. Tears fell off Ganga’s eyes. Ganga fell down. Riya tells Aasha to say a no for this relation. Aasha says if Shiv is ready to marry anyone else leaving Ganga, Radhika will lose her mother. She can do anything for Radhika. Shiv thanks Aasha and walks away.
In the Math, Shiv recalls watching Ganga come to wait for her well-wisher. Kushal comes to him and questions why he is doing so. How did he agree to marry Aasha leaving Ganga? Shiv shouts at Kushal to leave him alone, he has a full right to take decisions of his life. Savitri comes there and thanks him for giving her desire to her. She makes him break her fast, and hurries him to marry. Shiv allows her for the decision. He says he wants this as soon as possible. Shiv was apologetic to Kushal saying Ganga will be happy living away from him. He realizes until he marries, Ganga would never be freed from her responsibilities.
There, Ganga was still crying in the hall. Radhika cries watching her upset. Aasha comes to Radhika and takes her inside. The lights go off at once. Shiv’s words echo in Ganga’s mind. She comes to Shiv’s room and asks if he has again taken the decision of her life without knowing her will. She never gave him the right to make her a part of his life at his will, and then throw her out as well. If this was his will, why he always put his life at stake only for her. Shiv tells Ganga not to worry, he will arrange if she wish to live with a stranger in another city.
In the room, Aasha brings out a bottle of poison from her bag.
The next morning, Ganga comes out of her room and watches the drum beating and henna ceremony of Aasha. Riya comes to tell Savitri that Shiv isn’t ready to come for the ritual. Aasha says Shiv hasn’t eaten anything since morning, she goes to bring him turmeric milk. Shiv confronts Ganga in the yard. Aasha brings the milk for him. Kushal then brings a letter for Ganga, she turns to hit Shiv and the milk fell off. Savitri scolds Ganga. Riya tells Ganga to tell Shiv how much she loves him. Ganga says Shiv didn’t leave her any right to say this.

Ganga recalls watching the poison bottle. She comes to Shiv and tells him to delay his wedding, Aasha isn’t how she appears to be. She saw poison bottle in her room and the cat was also dead upstairs. Shiv tells Ganga she has not been able to accomplish her desires, he was the well wisher who helped her but she started to look for a partner in that well wisher. He shows her the half burnt letter and asks if she was really true why she burnt the letter. Ganga says there is a huge misunderstanding. Shiv takes her outside and tells Kushal to drop Ganga outside.
In the jeep, Kushal assures Ganga that he and Riya are with her, they won’t let her go. He takes Ganga to a hiding. At home, Savitri tells Pratab that Shiv would be half dead as Ganga has left, it is easy to kill him completely.
Ganga
cries in her hiding, saying she doesnt want to lose anything else in her life. Riya comes there and hugs Ganga. Ganga tells Riya that Shiv’s life is endangered. She must stay away with him all the time.
In the room, Aasha was ready as a bride. She speaks to Parvati’s photo that Shiv killed her, now she must revenge Shiv of Parvati’s death.
Shiv walks towards the ruins and finds Ganga’s letter there.
At the wedding, everyone ask about Shiv. Riya comes to Ganga and says Shiv has left without informing anyone. Ganga leaves behind him saying she knows where Shiv must be. Shiv gets Pratab’s call, Shiv tells Pratab he can’t marry Aasha. Pratab leaves for the ruins. Aasha comes behind Shiv. She says its good Shiv denied to marry her, he has killed Parvati and she came for Parvati’s revenge. She says she wanted to take support of Radhika for that revenge, but Radhika brought Ganga between the matter. She says it was not Parvati but she who went to the ruins to meet someone. She tells Shiv that he neither loved Parvati nor Ganga. Aasha points a gun over Shiv. Gagna jerks Aasha’s hand away, she tells Aasha that Shiv loved Parvati and he didn’t kill Parvati. She tells them she went to the place where Parvati had an acident, she found blood stains over the wall and pearl necklace that might belong to the murderer. Shiv asks Ganga why she didn’t tell him about it earlier, he would just go to police. Pratab comes behind with a gun, he says he would now kill Shiv and Ganga as he killed Parvati. Shiv wrestles with Pratab. The family had reached there too, but Pratab held the gun stubborn.

During the wrestling with Shiv, the gun shot was pointed towards Savitri. Shiv runs to Savitri, she apologizes Shiv for always being a step to him. The police comes there to arrest Pratab. Savitri was carried to hospital. Aasha comes and apologize Shiv and Ganga.
Ganga spends a happy time with Shiv and family, bringing in positive change among the family.
Shiv speaks to audience, “He never tried to take Sagar’s place in Ganga’s life.”
Ganga speaks about the changes she brought in Shiv and his family’s life. She inaugurates the school.