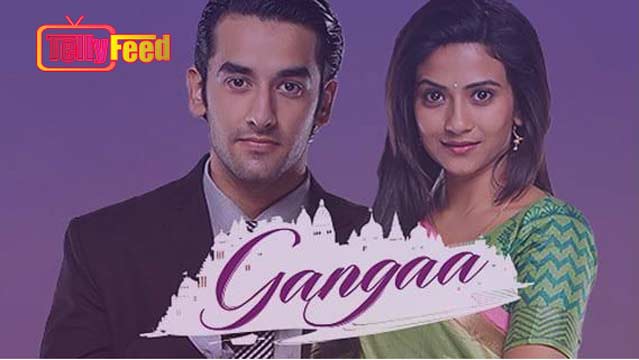 Ganga shouts from inside at him to open the door, she would leave this house and can’t stay here, she got peaceful for a while but he is really a wild man. She hates him. She won’t stay here, Shiv opens the door and enters the room.

Ganga backs up afraid, Shiv holds her by hair and challenges her that this time he would win over her. He comes out to find the family outside and tells them to go and sleep.
Shiv sat on the stairs thinking about his act. He was disturbed and bathes himself. There, Ganga breaks all the glasses in the room and destroys everything. She struggles to get the door opened. Shiv sat outside, water dripping off his head. Riya comes to Shiv and asks why he is doing this. Shiv reminds her to pack Radhika’s bag, he doesn’t want Radhika to see this. Riya goes silently.

In the room, Ganga cries thinking she would see how far he goes. Shiv says he is only doing this to fill her life with colors and happiness, this is difficult but he would win it. The next morning, Radhika leaves. Shiv comes downstairs, Ganga had fallen asleep by side board, in a messed up room. She knocks the door again. Dai Maa comes to Shiv and hands him tea as Ganga hasn’t eaten anything.

Shiv unbolts the door and enters. He watches blood over Ganga’s hand and says he didn’t want to do this all, she is forcing him to do this. He pushes her towards the bed and brings the rope to tie her with the bed. He instructs Dai Maa she would now only eat and drink by his hand, she will stay hungry until she agrees to his terms.
Pratab comes to inform Shiv everyone has arrived at Math. Shiv tells Ganga to decide until his return if she wants to eat with his hands or not. Ganga was left crying. Shiv leaves. Dai Maa peeks through the window and tells Ganga that Shiv wasn’t this way, he was hurt for whatever she said. She should cease being stubborn.
At the Math, Shiv says he called them all here because he wants to announce his inability to be a Mathadesh anymore. He takes his turban off.

Jhumki was cheerful that now Pratab would be the next MathaDesh. Pratab whispers to Savitri to announce that he would now be the MathaDesh. Shiv apologizes for announcing it so randomly. The villagers show their will to watch Shiv as MathaDesh. The Panch announces there would be an election for MathaDesh. Pratab says he would get the seat of MathaDesh after Shiv, there is no need for elections as per what has always happened here. Savitri stops Pratab and says Panch have suggested an election for the new MathaDesh. She silently assures Pratab only he would be the MathaDesh.
Shiv calls his workers to meet him.
Jhumki tells Ganga about Shiv’s announcement from outside. She tells Ganga to leave as soon as possible, as Shiv would no more care about anyone. Shiv comes to the room with food for Ganga.
Ganga was stubborn and not ready to eat. Shiv wasn’t ready to listen to her and eats from the plate beside her. Ganga looks towards the plate but doesn’t take the bite from Shiv’s hand.

At night, Shiv leaves for a nearby village and tells Ganga to leave this fast. Ganga thinks she must have some energy to run from here and should break this fast. He turns to leave. Ganga asks him for water. She thinks she is doing this to get herself freed from here. She coughs hard, thinking she must pose not to be well. Shiv was concerned and opens her hands. He makes her stand up.

Ganga asks why has she kept her tied now, she understands she was wrong. Shiv says her drama won’t work for him, he was a MathaDesh earlier but now he is a common man and can do anything. He unties her hands from behind. He leaves the room locking her inside.
Aashi speaks to her fiancé as they plan a party.
Shiv comes to the room and finds Ganga attempting to cut the window rods. Shiv comes there saying she would never be successful to run away from the village. His servants have kept an eye over her all day long. He tells Ganga to go and sleep, he is outside. Shiv sits on the doorway. Inside, Ganga thinks about doing something. She makes a noise inside, Shiv opens the door and tells her to go and sleep.

He gets a cough at once, pours water for him then gets a call from Muneem. Ganga remembers Shiv used sleeping pills, she mixes the tablets in his glass and pours him water. Shiv doesn’t take it first, he makes her drink it first to check if its well enough then drinks from it. Shiv goes outside and sleep at the doorway. Ganga successfully gets outs of the room, she notices the guards outside and thinks she must dodge them. She makes a noise the other way and runs.

Ganga faints asking for help by some men. They decide to take her to station. Ganga wakes up to find the men drinking beside her in the car. They tell her they are taking her to railway station where she wanted to go. She tells her name as Ganga, they ask about her residence. The railway station passes by. Ganga was alert and asks them to stop the car, the men begin laughing.

The men had brought Ganga back home. Shiv drags Ganga inside and warns Ganga not to try being cunning with him. He already told her that she won’t be able to leave the village without his will. He pushes her over the bed. Ganga screams that she doesn’t want to stay with him. Shiv shouts at her to go inside. Everyone from the family gather around. Ganga comes to Riya and Kushal and asks if they like this all, won’t they say something. She asks if they would only be silent spectators. She asks Savitri if she is a woman, would she witness her son’s behavior towards a woman silently. She cries requesting them all to let her go, she doesn’t want to live here and wants freedom from all these relations.

Pratab comes to Shiv and asks him to let her go, she daily creates such drama at home. He would have
bear if it was Pratab’s behavior. Savitri comes to slap Pratab and says she would give his reply. She says had Jhumki done this he must have thrown Jhumki out, Shiv can’t do this because its marriage.

Ganga was doing a lot staying at home only for the sake of revenge, she might do a lot if left outside. Shiv takes Ganga inside. Riya and Kushal also leave. Savitri stares at Pratab and calls Ganga an arm of Shiv’s destruction, she considers Shiv as enemy and Shiv would end in hands of Ganga. If she leaves, Shiv’s anger would calm down. Its better for them that Ganga stay here.