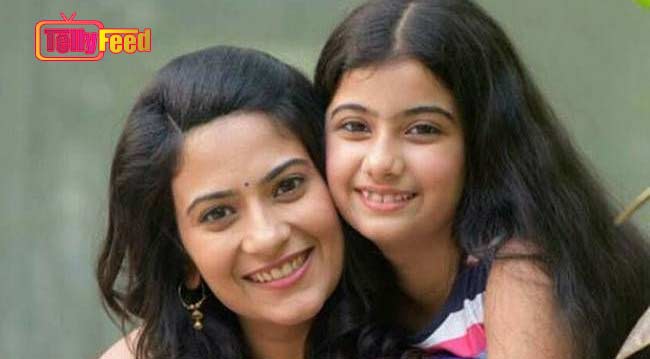 Jhumki was speaking on phone when she finds the three of them in balcony. Ganga wasn’t ready to hear anything from Aashi and tells her to go downstairs. She then asks Prakash if he loves Aashi and wants to marry her. He stammers approvingly. Ganga tells him to come downstairs and tell the family. He wasn’t ready to do it now. Ganga asks why he didn’t clarify he is just having a time pass with Aashi. She warns him to never be found near Aashi, else her brothers would break his hands. Prakash leaves from the wall. Ganga calls Shiv and thinks before something goes wrong she must tell Shiv about it.

In the evening, Savitri serves for the guests. Ganga observes Ankar (the guy), Savitri was irritated of the children along with the guests. They ask about Aashi. Ganga notices Ankar asks his mother to go to washroom. His mother takes him to washroom. While going, Ankar stuffs a samosa into his pocket.
Riya knocked at Aashi’s door, she was with Prakash. Prakash was making Aashi up to run away with him, her family would never marry them. Aashi wasn’t ready to do so, Prakash says her Ganga bhabi also wants the same, she sided them to do what they want to. He asks her to take her jewellry and run away with him.
Ganga follows Ankar and his mother who come to stand by a wall where Ankar takes a medicine and feels fine. Riya comes to call her for something important. In the room, Savitri hands Ganga
a letter from Aashi which she reads aloud. Aashi had written she abided by Ganga to do what she wanted to, she is running away with Prakash. Ganga says she really doesn’t know about anything. Jhumki shows her the photos from balcony. Savitri asks Ganga what this is, Ganga says she met this guy. She told Aashi to leave him, she had scolded this guy as well.

Savitri asks why Ganga didn’t share with anyone. Ganga explains she called Shiv, but he was busy. Savitri asks why she didn’t tell her. Ganga says she felt this won’t proceed any further. Savitri scolds Ganga, at the verge of crying. Ganga herself was worried, had she told everyone this shouldn’t have happened. She tells Savitri to take care of guests and insist on them to stay, she will find Aashi now. She goes with Jhumki’s phone. Savitri was worried that she needs to make up something to the guests.

Ganga asks about Aashi and Prakash from the passerby. An old man recognizes Prakash as Patwari’s son, and leads her on his cycle to his residence.
Ankar’s mother was ready to stay, as Savitri wants them to meet Aashi in front of Shiv. Ganga was kidnapped at Prakash’s resident. She was brought into a house and laid on floor with Aashi. Prakash instructs his man to kill them both, it’s because of Aashi that he could get his hands over such jewelry.
Shiv hears Ganga’s cry for help while passing from outside. Shiv and Prakash hurry towards home. Savitri was worried watching them. Savitri introduces them to the guests. Ankar’s mother asks them to bring Aashi now. Savitri goes inside and sends Shiv and Prakash in as well. She leaves Riya and Kushal with the guests.
Inside, Shiv was shocked to hear the news. He was worried and suggests they must tell the guests about everything clearly. Savitri was worried about their family’s insult. This way she would never get married. Shiv says at least she would stay in front of their eyes, what if she doesn’t return now? He goes outside to clarify the guests about the truth, later he must go and find Aashi and Ganga. Shiv was about to speak to the guests when they hear Ganga bring Aashi. Aashi greets the guests. Ganga says Aashi also wanted to meet them all. Jhumki was going to bring Ankar, but the lady tells them to leave him for rest.
In the room, everyone scolds Ganga for teaching Aashi about this all. Shiv questions Ganga, but Aashi comes to say it’s not Ganga’s mistake. She wanted to apologize everyone. She thought Prakash loved her but he only betrayed her, she ran with him only because she was aware they would never marry her. She recollects how Ganga saved her from Prakash’s man who intended to murder them. Outside, Aashi cried apologizing Ganga. Ganga tells her to stop crying, she has been lucky to find his reality in time. She wouldn’t have been alive had Ganga not reached in time, she put her own life at stake for Aashi. Shiv asks Ganga why she didn’t speak earlier. Ganga complains no one must have trusted on her. Kushal says they would forward the matters of proposal with Ankar once Aashi and Ankar meet each other. Shiv nods at Ganga, while Savitri was curt over their exchange of looks.

Ganga hears Ankul demanding his mother to take him to washroom. His mother gives his medicine to eat. Ankul calms down, Ganga says Ankul is mentally weak.
The family had been gathered at home when Ankul comes outside with his mother. Ganga questions Ankul why he doesn’t go to washroom alone. Ankul says his mother says he is a child and shouldn’t go anywhere alone. The family was enraged, Shiv tells Ankul and his mother to leave their house at once. Kushal points Jhumki brought this proposal. Jhumki was offensive that Kushal is blaming her and she didn’t do it deliberately. Aashi comes downstairs and thanks Ganga for saving her life once again. Kushal says whatever Ganga did proves Ganga cares for Aashi, she didn’t even want Aashi to be disgraced in their family and stayed silent. Savitri goes
to check if Ankul’s family has left or not.

Ganga was about to leave too when Shiv stops her. He takes a small bag and ties a bead with Ganga’s mangal sooter for fulfilling her promise to protect the family. Later, Ganga was arguing Kushal for selling the vegetables on high prices. Kushal pays him as per demand, and reminds Ganga she is the wife of Shiv. They then discuss about sarees, Kushal asks Ganga why she didn’t wear the saree Shiv had gifted her and asks if she bought something for Shiv. He now takes a leave. Ganga counts she only had 20 rupees, then watches some pots in front of her and gets an idea.
At home, Ganga comes to Shiv in the saree he bought her. She presents Shiv with the gift she bought him. Shiv throws it behind him out of rage, and tells him not to bring these flowers to him ever. Jhumki was happy watching this. Dai Maa goes to put the flame off the flowers. Dai Maa asks Ganga why she bought these flowers. Ganga says Shiv got her saree, so she also brought these flowers. Dai Maa says for Shiv, these flowers are the memories that still pierce him. Shiv loved these flowers, Parvati used to go to a faraway place to get these flowers for him; since that day he hates these flowers. Ganga was upset what she did undeliberatly.
Shiv comes to a room with packed luggage. He opens Parvati’s suitcase and opens a box with Parvati’s notes. He takes one to read it, ‘Parvati wrote his happiness matters the most for him, God only gives a single chance to live happily and one must never lose that chance. She would be happy watching him happy.’ Shiv was silently crying, Ganga brings a glass of water for him. He hides his face the other way. Ganga takes a seat there and apologizes for not knowing. Shiv says it wasn’t her mistake, she didn’t know; he regretted for shouting at her. Ganga suggest they must say a sorry together, this would end the matter. Shiv calls it childishness. Ganga says this would lighten his heart, and counts till three to say a sorry. Shiv doesn’t say Sorry. She counts again, this time both say a Sorry together. Ganga asks if he liked it, he nods. Ganga shares with Shiv she was really afraid because of his anger, but not she is also enlightened. She allows him to spend some time with his memories and leaves not disturbing him.
Pratab and Savitri discussed about school that would raise Shiv’s standard in the eyes of villagers. Savitri plans something evil tomorrow.
The next morning, Ganga brings tea for Shiv who was busy with work. She asks if there is some tension. Shiv says they have very less workers, especially females. Ganga asks if she should come there. Pratab says their daughters never work outside, Shiv can’t allow her. Ganga asks if she wants to help for a good cause, what’s wrong with this. Who would help Shiv if not their family? Pratab was about to repeat that she can’t work, but Shiv says she can work and tells her to get ready by 9 am. Ganga was happy.
Ganga lay the first brick foundation of school along with Shiv. Shiv congratulates everyone around, Ganga help with the work, Radhika also came there and serves everyone with water.